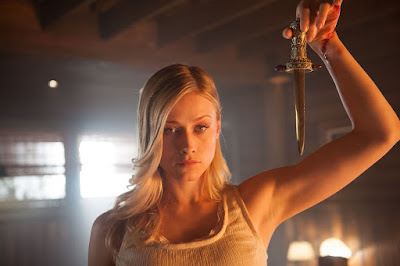 But alas our modern sensibilities negate our desire for patient observations, and this is a movie that makes vulgar use of every modern excess you can imagine: loud noises, flashy images, overzealous confrontations, soundbite explanations, fragmented plot points and explosive resolutions. Like a piñata full of bees, the movie possesses all the sting of its ideas and none of the logic. Should we be at all surprised, though, given how narrow a vision this whole concept has devolved into? The director is Mark Neveldine, a marginal identity whose claims to fame (thus far) include a handful of the “Crank” pictures and a sequel to “Ghost Rider” (of which few ever saw). To assume he might be working with any distinction other than the cash-cow trajectory of his studio is to believe Hollywood is selfless in the act of financial prosperity.

This time, their target is Angela (Olivia Taylor Dudley), a college student in a moment of happiness when her father (Dougray Scott) makes a surprise appearance at her birthday party. Their embraces are contrasted by the visible tension of he and her boyfriend Pete (John Patric Amedori), to be emphasized later when both are asked to arrive at difficult decisions. But never mind. Just a few shy minutes into the celebration Angela cuts her finger while slicing her birthday cake, and is rushed off to the emergency room for what becomes an ongoing routine of unfortunate circumstances. The cut is deep enough to require stitches. Her throat becomes excessively dry. Her demeanor shifts from optimistic to gloomy and anxious. Others interlace their sympathy with concern. While traveling on a bus, a raven breaks through the window and attacks her, injuring her finger further. And after there is an attempt to take her home from another doctor’s visit, the car is part of a major accident that results promptly in Angela being placed on life support; weeks later, when the family must decide to pull the plug on the machines, she miraculously comes back to life as if no damage had been sustained during any of the prior ordeals.

What caused all these incidents is perfunctory to this plot: some menacing presence has inflicted poor Angela’s body and is engaging in a hostile takeover – of her mind, her spirit, and even her very lifestyle. The priest of earlier scenes (played quiet well, I concede, but Michael Pena) hangs around like a nagging force of suspicion; he doesn’t come right out to suggest possession, though there is a viable unspoken conclusion in his interactions with the father (a Roman Catholic, not surprisingly, who has yet to come to terms with the possibility). Further discussions also lead to a wide array of sequences involving psycho-analysis at a nearby institution, where the stoic Dr. Richards (Kathleen Robertson) probes her for potential insights but is thrown off by volatile diatribes about life secrets and potential blackmail. Then there is a tone-changing sequence in which Angela passes on a demonic whisper to a nearby patient, inspiring a very violent and ambitious rioting sequence in which nearly half the hospital is left butchered in the halls. Only then does the suspicion turn towards the possibility of demonic energies, even though less educated sorts in a movie audience could have arrived at that conclusion well without any of the earlier visual cues.

Therein lies the fundamental flaw of “The Vatican Tapes” – not the flood of technical tricks and “gotcha” moments (which would be enough of a problem on its own), but in an overreaching air of smugness that insinuates audiences are too stupid to arrive at very obvious conclusions. So many of these scenes and performances are pitched below the common denominator of acceptable movie tricks; as I watched them I was left with the impression that no one involved understood the meaning of reading between the lines, or at least had the capacity to comprehend the value of mere suggestion. Later, after it is clear in the minds of the characters that something very troubling is going on within Angela’s body, there is a discussion between priests so overwrought that it’s baffling. Are they speaking to each other, or to braindead observers standing off in the shadows? One cannot exactly understand the thoughts of the movie’s primary target of torment, sure, but if you or I had been a demon trapped in someone’s body, wouldn’t we have preferred engaging with enemies that could do something more than bore us to death?

And what of that downright betrayal that is an ending? Mere words escape me at a coherent attempt to describe this “resolution” – it plays more like a flat punchline to a joke no one saw coming, without any possible underling humor for it to fall back on. Are we expected to feel anything for Angela when the legitimacy of her identity is thrown into doubt? What does the explanation in the final moments say about those who lived with her for so many years? Any potential for a “deep” meaning is lost within the ramblings of a textbook-caliber observation that has no relevance or purpose to any of the scenes that come before it. Considering how Neveldine and his writers view the intelligence of their characters, it’s insulting to assume they have any profound things to say about their experience as it relates to the common population. A sermon might convey the message in far more relevant ways; to see it in a dreary horror movie insults the very reason I even show up to the theater.