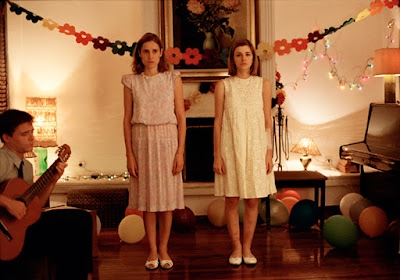 That becomes more difficult than we imagine. The situation: a family of five resides comfortably somewhere in the hills of the Greek countryside, lead by a father who goes into the world by day and returns, usually with colorful stories, by night. The reality: he and his wife are the parents of three teenagers that have no concept of a reality beyond the one that is put into them. The reason: undisclosed. Could it be power over the innocent? Fear of civilization? Something more menacing, maybe even post-apocalyptic? Or experimental? Our minds swirl these possibilities over in the forefront of every behavior impulse that seems likely, although to no end of gratification; as we descend further, it becomes obvious Lanthimos is interested in studying the very mechanics of their personalities, as if fascinated by the possibility that entirely different realities might alter one’s nature to ask questions or contemplate the bigger picture.

The story concerns a brief several weeks in the lives of this Greek family, walled up in their house like captives of their own ignorance. The father owns a factory; every day he travels to it, functions with others in ordinary passages, and then returns to a world that plays like a youthful daydream. Here, teenagers have lived the entirety of their lives being fed almost ridiculous stories: airplanes are toys that may fall from the sky if they behave good, mouthwash is a punishment for not following rules, the yard is unsafe if wandered alone, and cats are demonic beasts waiting to claw them to death. Other precious morsels: a salt shaker is referred to as the “phone,” and “zombies” are yellow flowers in the garden. The explanations, ranging from bizarre to insane, occur out of a knee-jerk necessity to reveal a truth to the children, maybe because it would rouse their curiosity too much for them to remain submissive. In many respects that forces us to attach some level of loathing to the parents, who aren’t motivated by any obvious notions of protection, however extreme. Are they possibly just stringing them along in an experiment of their own making, or are they crazy isolationists who get off on the control?

The soul of the film lies in adolescent desires. The oldest daughter, seemingly detached from the need to protect or nurture the others, spearheads adventures around the house like a stern facilitator of routine. The son, apparently head-first into puberty, is encouraged to act on his newfound urges by his father, who occasionally brings home a woman from work to assist in the education. Eventually that also spills over to the daughters – one of whom is asked to perform fellatio on the visitor in exchange for a possession from the outside world, and it is misconstrued as a gesture of reward rather than an act of sexual release. Later, after the oldest has been roused to ask for greater exchanges for the act, she comes into the possession of video rentals; later, after viewing them in the privacy of the night, she is seen standing in the mirror enacting scenes from “Rocky,” and then mimicking the dance moves of “Flashdance” for her bewildered parents. Their qualm: these are sensations they have apparently hoped to spare from their children, perhaps because it represents the loss of a control they crave. The punishment is certain: the oldest must forget entirely about these experiences, and the girl responsible for introducing them must be exiled from their house after she is bludgeoned in her apartment.

All these actions and responses are delivered mechanically, without any sense of build-up or emphasis on human sensation. No attempt is made, furthermore, to understand their context; to do so would be to place emotional value into a situation that calls for none. Some will certainly absorb those qualities and find them in divergence with their own personal standards, but there is some perverse value in making a film this way. For Lanthimos, it means having a total command of a world that has no literal boundaries; for us, it commits the eyes to a situation in which nothing can be anticipated. As the story advances from one absurd claim to the next, it becomes clearer, with each passing act, that the film is functioning as a litmus test for our very patience. One of the more vulgar examples is treated with alarming detachment: after the girl visitor is banished from the house, sex for the son must continue… but with siblings rather than strangers. Most films would recoil in horror at the notion; “Dogtooth” observes the act neutrally and literally, without gloss or sensation distorting the view.

And still, without reservation, we watch on and on – sometimes in horror, often in confusion, and always in complete awe of its strange and perplexing energy. Though we feel little for these people, their world is a mournful antithesis: one we would never want to live, much less contemplate. Amidst this, the director draws powerful performances from actors who have a committed stake in the execution, and there are moments where we suspect they have bought into these details just for the sake of understanding the ideological methods of their avatars. The look of the film, meanwhile, has resounding clarity: little in the way of jump cuts or movement, but a stern focus in scenes where everyone must act as if marching to a rhythm being made up on the spot. The final scene, as perplexing and inconclusive as you come to expect, touches on the right note of the title: the key to understanding anything, indeed, may exist somewhere in an agony that we force upon ourselves, even as the surrounding world tries to mislead us into accepting an unnatural comfort.