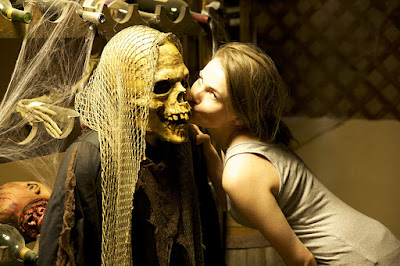 Five years have passed since the Hell House attraction came and went in a single flash of notoriety, and the mystery of those fateful events still plagues the thoughts of the outside observers – including Diane (Alice Bahlke), an aspiring filmmaker who is dumbfounded by the lack of specifics provided by legal authorities. Her curious nature leads to an investigation on film that turns up crucial findings, including a survivor named Sara (Ryan Jennifer Jones), who was the girlfriend of the haunted hotel’s primary director. Her accounts play like menacing riddles, unearthed for the very first time after being concealed behind paralyzing trauma. But then a miracle happens: she produces a bag containing hours of footage from within the house, filmed in the months leading to that disastrous night. “How did you get this?”, Diane asks. “I took it before the police could.” And so begins a slow and agonizing crawl through videos that may answer the most dumbfounding question of all: did what happen to all those people occur because of a mechanical malfunction, an accident, or was it the result of something supernatural?

For a good while “Hell House, LLC” plays it straight with this premise, cutting back and forth between newly discovered footage and present-day interviews. Each is like a hand working different sides of a muddled jigsaw puzzle. Yet as the picture comes together to one definitive point, the conventional expectation of the procedure is eroded by a slow and gradual buildup to something startling. Intrigue becomes creepiness, then shock, then well-focused terror. I became awestruck by the depths of its ambition. This is not a movie manufactured from within the conceit of aspiring filmmakers hoping to make a low-budget wave, either: what these people have created is a credible descent into the material, full of the right balance of exposition and behavior to contrast the more devious visual intentions. And just when one thinks all the layers have been pulled away, an elaborate climax insists otherwise. Few attempts like this have ever been this wall-to-wall with bombshells, and even fewer contain the sorts of insights normally reserved for the more experienced masters.

The very nervous system of this idea seems fueled by a deep need within the people involved to produce something distinctive. Containing relatively unknown faces and a crew of novices standing behind the frame, their union intoxicates the material with the aura of an exciting new ambition. The early interviews establish their enthusiasm; after a brief synopsis of the Hell House’s now-infamous opening night massacre, a batch of present-day documentarians begin to ask all the pointed questions as a way of foreshadowing their inquiry towards a predestined path. What, or who, oversaw the catalyst that lead to so many deaths in the hotel’s basement? Why has the only known video from that night, a brief viral sensation on YouTube, since been confiscated by legal authorities? Do the witnesses – those that are alive, that is – remember anything substantial? Why are the police mum on the specifics? It could be, we learn, because no one exactly knows – somewhere in the chaos of the events, a specific source was never isolated. Nor, for that matter, were all the bodies recovered. A conventional story would suggest incompetence within the police department; a horror movie rooted in the paranormal knows better.

That may also explain why said hotel remains an elaborate boarded-up ruin, looming over passers-by like a white elephant standing defiantly on the side of a country road. Eventually it will be broken into by the same people seeking finality with the details, but not before a cascade of exposition attempts to bring clarity to the questions. The footage assembled reveals a clear line of events: Alex (Danny Bellini), an entrepreneur in upstate New York, has brought a group of trusted friends, colleagues and employees to the famed Abaddon hotel in hopes of resurrecting it as a Halloween attraction, full of ghouls, creepy noises and plausible jump scares. It is the ideal sort of seasonal start-up, appealing to the holiday’s most hardcore enthusiasts without cheapening their experiences with the conventional outlets. During this time, Alex’s entourage will live in the hotel, document the attractions they create, and film the results. But because they are a mere two months away from a scheduled opening of October 8th, speed is a must, and there are early exchanges that play like the banter between rivals in a backstage race towards coming up with the most effective gags.

Most of the material is shot by Paul (Gore Abrams), a sarcastic stone who is the first to spot a string of strange incidents affecting their production. One of the great props at their disposal is a trio of nightmarish clown mannequins stationed in the basement behind a furnace, build as if they could hold the body of an actual person. One of them seems to have a life of its own; in several shots it is seen randomly appearing in doorways or on floors, sometimes with its head cocked in the direction of the camera (even though the heads are not supposed to move). This is unnerving to Paul, who eventually wants to abandon the task out of fear. Others believe he is manufacturing a fantasy for his own amusement, despite evidence to the contrary (video, after all, rarely deceives). But are they showing skepticism because it makes no sense in the context of their project, or is Paul, genuinely, fabricating something? How are we to know if he is just putting on for the camera? A round of dismissive dialogue indicates that everyone on set has harbored unfavorable opinions of him way before now, blurring the issue further This proceeds strategically until one night when Paul mysteriously disappears, leaving other members of the crew to ask the question whether he might be the source of all their misfortune, or if he is just the first victim of what is to come.

The director is Stephen Cognetti, whose prior credits include only a trio of shorts, but is a self-proclaimed aficionado of abandoned buildings with questionable histories. That provides him a plausible foundation. Yet in the course of a meager 10-day shoot he also managed to resist the urge to surrender to cliché and played the material with a natural, unsmiling gaze. That is remarkable in this time of sensory overkill, where musical thuds and quick edits are responsible for the bulk of forced jump scares. Those that exist in his movie come from neither; they are established by a succession of shots leading to a point that we anticipate, yet comes only after an agonizing delay. Consider a moment in which Paul, awakening for one of his nightly video diaries, turns the light on the room and does not initially see a mannequin lying sprawled out near the doorway. By the time he glances back to notice, the shock has already settled in – it wasn’t there just a couple hours before. The next moment involves him crawling under the blankets with his camera in tow; a few seconds later, he lifts it slightly to notice the mannequin has moved closer, this time with threatening white eyes. Knowledge of this technique means we expect the next shot to be one in which the figure has emerged close enough to act, and yet Cognetti draws the wait out – long enough, in fact, that there is a moment where we are not even sure if he will proceed on the impulse. That is the skill of a man who is finds humor in playing the audience in actions rather than exhaustive diatribes.

One of the more understated features of the film is its lack of CGI, which contradicts the trajectory of most high profile found footage films. The sets, props and camera tricks are all the work of literal production design, which must have been taxing – given the intricate nature of many of the on-screen stunts, one could argue the technical wizards had machine-like precision in how they rigged many of the key sequences. The final act, which is as nonstop as climaxes come, is also brilliant in this regard: it reveals enough without creating certainty. Yes, hypothetically, person A is certainly going to be the victim of a mauling from person B in a particular scenario… but what is taking them there? A clear case of insanity, or some secondary impulse created by the dark energies circulating in the hotel? At the center of this unstoppable urge to understand is Diane, always gathering information, knowing that the truth remains buried behind the boarded-up doors of Hell House. How unfortunate that no one took the time to suggest that some secrets deserved to stay hidden.