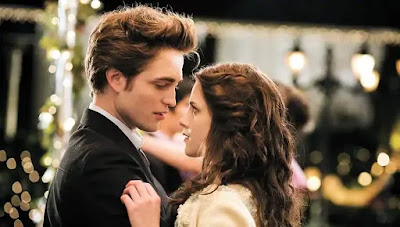 The story, based on a series of novels by Stephenie Meyer, is well known. It tells the story of Bella Swan (Kristen Stewart), an isolated teenage girl whose transition to womanhood apparently occurs just as her sphere becomes populated by strange pale figures lurking in doorways. She arrives in the movie having left Arizona for Forks, Washington, where she moves in with her father Charlie (Billy Burke), the sort of dad who is rarely present and always seems like he is nursing old unknown grudges. There, she establishes quick friendships with a handful of high school classmates who seem ambivalent of her apathy, and then catches the eye of Edward (Robert Pattinson), one of five siblings of the enigmatic Cullens family, who recently located to the area. There is an awkward sense of allure between them that goes unspoken in the early scenes, although a precious misunderstanding of impulses leads Bella to believe he is thrown off by her potential body odor; later, after he winds up sitting next to her in Science class, that possibility is forgotten when the two share a handful of conversations that suggest an attraction – although in a much simpler movie, one might misinterpret their behaviors as extended rivalry.

What is occurring between them, we surmise, is an attraction stemmed from a deep yearning or loneliness. They are people living tortured existences, alien from a world that doesn’t want to understand them. Or some nonsense like that. For the sake of story movement, we accept the encounters at face value, and for a good while it appears to lead somewhere. She is mystified by the pattern of his presence, which ebbs and flows based on the amount of sunlight outside. He, a self-proclaimed expert at reading others, finds her mystifying and uncertain. Then his eyes change color in a moment of heated exchange, inspiring audacious questions. Later, in a parking lot after school, she she is nearly crushed by a car swerving nearby when he intervenes to save her (how could he, though, when he was on the other side of the lot just a moment before?). It becomes clear to anyone with half a brain what is going on here, especially given the side details: Bella’s father is constantly out answering calls of murdered citizens, all of whom appear to have been mauled by a wild animal. Unfortunately, even an astute and observant girl like her is nothing without the conveniences of a modern world. So how do you think she comes to realize that she is in the company of a vampire? Through a Google search, of course.

I digress. The primary conflict depends on Bella and Edward to maneuver the compost pile of young hormonal tendencies for the sake of an impending war of ideals between two foreign worlds: that of the secret world of bloodsuckers and the people who would ordinarily be their victims. The Cullens, we are told, do not operate by the primitive means of their ancestors. They feed on animals to avoid consuming humans. Others, including a trio of renegade vampires wandering through Forks, argue this lifestyle contradicts their nature, and then there is a scene where the two ideals are tested: both sides cross paths in an open field, where Bella’s living scent inspires the ravenous cravings of James (Cam Gigandet), who will attempt to hunt her down in the movie’s impending climax. The Cullens, of course, have taken enough of a liking to their new human friend to fight on her behalf, and this inspires the sort of feud first seen in “Romeo and Juliet,” where at least Shakespeare took the time to establish contrasting dynamics beyond the forbidden allure of his would-be lovers.

Ok, ok, maybe I am being elitist in evoking Shakespeare in this context, especially when the most direct comparison should be Bram Stoker’s “Dracula,” the literal bible of vampire psychology. But referencing anything more than a direct source would be problematic. Why? Because nearly all of them are better than anything going on in “Twilight,” which is about nothing of consequence, deals with people who have the emotional depth of silkworms, and involves them in conflicts that carry no intrigue beyond all the mechanical maneuvers. The movie is a slow and painful slog through an abyss. But what of the two leads, you might ask: aren’t Kristen Stewart and Robert Pattinson convincing enough to redeem an otherwise straightforward story? Perhaps separately, in better material, they could exhibit their skill; here, they have no on-screen chemistry beyond the conventional peaks and valleys of their libidos. Like insects during mating season, they congregate briefly and often without ever actually landing on a hard surface. A whole movie based around this dynamic is a failed experiment – because for any love story to work, the lovers must be provided the opportunity to emerge from whatever personal limits might be holding them back. This is one that accepts them as slaves to a stubborn configuration.

Then there is the question of a plot: where is this all going, anyway? Director Catherine Hardwicke seems paralyzed by the formality of a long setup, without much desire to embellish on potential dangers lurking in the periphery of her players. She is hardly the first, although one could argue other well-known movie series at least having the benefit of a more grounded platform. “Twilight,” in contrast, suggests dead-ends: background characters who exist only to fill in monotonous dialogue requirements, potential sub-plots that barely suggest other menaces (are there actually werewolves living on a native American reservation, or is this just a red herring?), and climactic encounters that come, go, and are solved usually in the span of a five-minute action sequence. Oh well. For the sake of appeasing the target audience of material like this, at least Hardwicke allows her two primary love interests to enjoy themselves in the final scenes, where they attend prom, dance in a gazebo, exchange melodramatic professions of love and pause to be photographed. One wonders if Bella’s internet search, at least, included information about vampires not being able to show up in pictures.