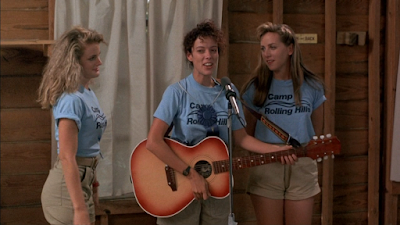 There is no limit to the perplexing decisions made in films riddled with dead teenagers – ranging from the odd sources to the way victims are picked off – but what I endured during “Sleepaway Camp II” is inexplicable: the movie doesn’t bother concealing the identity of the antagonist when it ought to be obscuring it. Where is the fun in that? The intrigue or discovery? Someone behind the scenes may have been deluded enough to think this premise was worthy enough to leapfrog the standard like “Halloween” or “Nightmare on Elm Street,” which don’t bother with the antagonist setups for obvious reasons. Unfortunately, the person standing behind the weapon of this story is no otherworldly monster. She barely functions as an interesting human being. And lo and behold we are forced to sit in contemplation of this dull reality through 80 minutes that play like a transition from sleep to a deep coma, all while being robbed of any sense of thrill or intrigue along the way. If the first film persists as a reminder of the cheap pleasures of inexperienced filmmakers, then this sequel calls to mind the poverty of their own common sense.

The first scene reveals the clarity of this conviction: a group of teenage boys (and one female) are gathered around a campfire, regaling each other with sinister claims of a murderous tragedy at a nearby camp, when they are interrupted by Angela (Pamela Springsteen), a young counselor who plays like the world’s most uptight hall monitor. Her objection: girls should not be fraternizing alone with boys in the middle of the night without supervision, and along the walk back she brands the misbehaving girl as a “slut” in need of punishment. What that means, it turns out, is she must bludgeoned to death in the next moment by her own companion, which inadvertently leads to another discovery: this Angela is apparently the same one who terrorized so many others in the earlier film, and she has moved on to exact the same brand of bloody judgment on a host of new kids on the verge of all the obligatory pubescent misbehaving.

Alas, no one at the camp itself is wise to the possibility of foul play; when they awake to discover one of their own is missing, they willingly accept Angela’s narrative that she was “sent home” as a result of going out the night before. This is a device used to imply an overreaching fear in the others, although not a very serious one; most see the possibility of leaving as attractive, especially when their guide’s own authority usually involves her shouting “Uncle John is going to hear about this” ad nauseum. In turn, their ignorance provides Angela ample opportunities – and few restrictions – in providing similar punishments to a host of other campers who are destined to go against the rules, and among a lengthy list of oh-so-naughty sexual escapades and pot-smoking, the villain offers the accused these sorts of inspired endings: being burned alive on an outdoor grill, beheadings, severed arteries and even drownings in an outhouse. And if you think the increasing death toll is enough to cause alarm or suspicion in any number of survivors before they too are confronted with the possibility of death, then you assume wrong.

Normal teenagers, however, are not this dense or short-sighted. A movie like this could never exist, because someone like Angela could hardly last long enough without being noticed or spied by any number of meandering onlookers. That means “Sleepaway Camp II” is awkwardly contrived in addition to being brainless. Nothing occurring on screen seems to point to anything, other than being an exercise in absurd gratuity. Everything lacks an edge, and the absence of any mystery surrounding the murderess means her act of mayhem exists only to denounce the opportunity of a serious conflict. Like a slaughterhouse, everyone lines up freely to be lured into their own demises, without any sense of individualism creating a ripple in the pattern. Even that might have been ok if the movie had a sense of occupying time, but all we get is terrible dialogue, performances pitched at the level of an elementary school fantasy, pointless nudity, bad lighting, illogical plot points, and death sequences that look as if they have been made up on the spot.

I grow restless with stupidity this drastic. Simple or straightforward are buyable values, even in a movie that aims dangerously low. This may be why “Friday the 13th,” the least of all horror film franchises, endured through so many sequels. There was some level of perverse fascination in how low the antics of Jason Vorhees could go. But a series like this wants to be taken far more seriously – an insult to anyone in the audience who has two brain cells to rub together. Who is going to be endeared by the idea of spending so many exhausting moments with people who might as well be vegetables? Or a villain who has no serious motivation beyond the need to exert power over others? Or a screenplay that seems like it was conveyed in drunken gestures rather than writing? Whoever could be blamed for this garbage, one hopes Uncle John eventually punished someone for it.