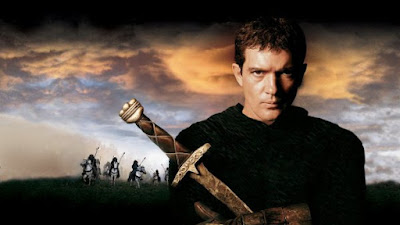 He may be the leading character, but he has no gravitational force anchoring our interest. The movie is not even a definite Banderas vehicle – in fact, any attention the film gets is owed to the fact that it is the long-anticipated adaptation of "Eaters of The Dead," a novel by Michael Crichton. For the near-two years it has been in production the movie has been through a ring of chaos, weighed down by a stupendous budget that swelled past $100 million, and followed by rejection from test audiences who were reportedly mystified by the first cut. But director John McTiernan and writer William Wisher Jr. were apparently determined to get it right: their incessantly ambitious egos felt that a product could be salvaged from all the senselessness. They went back to the drawing board, reshot certain scenes, and revised parts of the script. There were even reports of Crichton himself offering help with some of the reshoots, which is seldom a golden sign.

But maybe their decision to modify the picture should have been reconsidered on the basis of two facts. For one, cinema has already proven that alterations done to an original concept frequently interfere with the filmmaker's original vision. Secondly, one should choose to modify their products at their own discretion, not at the proposal of test audiences. What is a filmmaker, I ask, if he cannot trust his own judgment? A film may be bad regardless, but in the first scenario, at least he is standing behind his vision.

"The 13th Warrior" opens in the midst of a ferocious storm, in which the camera closes in on a ship tossing through the waves, and eventually settles on Ibn Fadlan (Banderas), who tells us a strange and bloody story. Banished from his homeland after the pursuit of a married woman, he is 'appointed' ambassador and sent to the north, where he comes across a group of perverted, rude, nasty ignoramuses who are about ready to embark on an expedition to the north involving a hunt of bear-like beasts who murder fellow Norsemen, rip their heads off, eat the bodies, and don't even bother to clean up after themselves.

The trek requires 13 sword-wielding henchmen, but only 12 can be from the north. Fadlan is selected the 13th soldier in their fated expedition, and soon finds himself amongst a slew of non-English-speaking Norsemen. But in one of the movie's few compelling scenes, the lone Arab observes each man carefully, picking up on the dialect just as it is spoken. Words are repeated over and over in his mind, as are the shots of men hurdling around the campfire, laughing, drinking, and telling stories. Soon those words are clear to him: on screen, in one quick moment, the dialogue is uttered in English. Why, you ask? Because Fadlan is beginning to comprehend their language, and we are being given the dialogue through his mind, filtered down to us as something that doesn’t require subtitles.

Alas, none of the dialogue is significant in the shallow story. That's because characters use parley as seldom as possible, so that important and needed explanations become sidetracked behind all sorts of complex battle sequences – some so confusing that when a warrior is slain, you aren't sure if it's a good or bad buy. There is a dialogue sequence, for instance, that begins with a promising idea: what if these "eaters" think they are bears (after all, they collect carcasses and wear the fur as headdresses, hiding their human form)? Is it possible that they hibernate in caves when they aren't out hunting down humans? Maybe. But instead of pursuing the perception, the screenplay puts it in the discard pile, instead concentrating on the countless sequences of brutal slaughter, in which the 'eaters' invade villages, and the warriors attempt to subvert their efforts. Even though the living in a cave theory proves true, no one brings up the bear subject again.

I wanted this movie to succeed, even though it was clear from the amount of time it spent on the cutting room floor that nothing could be salvaged. Do the revisions, however, make the product better than the first version? I have my doubts. But regardless, they shouldn't have been done in the first place. A cut made on pressure is never rewarding. My best advice is to pick up Crichton's novel and read it cover to cover. It is an outstanding piece of literature. Seeing "The 13th Warrior" is like wishing for light at the end of a long dark tunnel, only to find out that someone has sealed the exit.