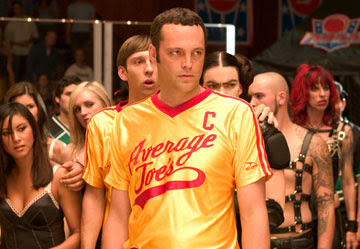 "If you can dodge a wrench, you can dodge a ball," says an eccentric coach played by Rip Torn as he tosses tools at his team hoping that someone learns to do something other than just stand there and be hit by flying objects. A point like this is much more amusing in context with having seen it in "Dodgeball: A True Underdog Story," but in ways it serves at the ideal platform to begin this review. Why? Because Torn's dialogue plays less like instructions to inexperienced athletes and more like warnings to the audience about the convoluted logic required of such an undertaking. This is not the kind of movie you are going to see because you want comedy that is politically correct or even halfway rational, after all.

I paint this picture to sound as if it is a negative, but amazingly enough the movie works (at least most of the time) because of this approach. "Dodgeball" is silly, illogical and downright brainless fluff that, for one reason or another, manages to be both funny and charismatic all the way through. Whether it is at a moment when star Ben Stiller turns his character into the punchline of his own jokes or when a game-player is being blasted hard by rubber balls, the film is a consistent barrel of chuckles. Of course, no one will expect you to recall more than two or three actual jokes a week or so after you have seen them, but the better comedies of the recent years don't depend on lasting impressions anyway. Here, at least, is an endeavor that lives for the moment and has a lot of mindless fun doing so.

The story revolves around two competing gyms: one, a high-profile (and high-profit) establishment called Globo Gym run by exercise guru White Goodman (Stiller), and the other, a lesser-known one called Average Joe's managed by the much-less-ambitious Peter La Fleur (Vince Vaughn). For years, the movie suggests, both gyms have coexisted without any hint of dissent, but as the film opens Goodman is conducting a takeover of Average Joe's that will allow him to turn his own gym into a local franchise. Peter, alas, is so far behind in payments that he has no way to counter his competitor, and the prospect of the place being surrendered over to a more imperialistic owner in 30 days seems inevitable. Lucky for Peter and his assemblage of co-workers/gym enthusiasts, however, they would do just about anything to come up with the necessary $10 thousand to keep Globo Gym from assuming ownership, and when they learn about an obscure sport called Dodgeball that will pay that amount of money to any team that wins the national championship in Las Vegas, they decide to go for it. What this assemblage of "underdogs" don't count on, however, is the vengeful Goodman putting together his own team of athletes to compete in the same sport to ensure that Average Joe's doesn't make it into the finals.

The title of the movie inspires the kind of hope that the premise seems to overlook. Average Joe's Gym isn't composed of a membership of people who could succeed much at any sport, much less one that requires them to be coordinated enough to dodge objects as they are being hurled at them by vengeful competitors. Besides having a half-serious owner and an overzealous coach leading the pack, the team of misfits consists of a teen who wants to impress a girl by becoming a cheerleader, a guy who thinks he's a pirate, and another guy who tries to pretend that his marriage to a made-to-order Asian bride is genuine. An entourage of individuals like this wouldn't even be ideal for competing in a Special Olympics, but after they manage to get into the Las Vegas finals via a technicality, their teamwork gives them skill, confidence, and a fighting chance at taking away the top prize. The movie is surprisingly refreshing in the way it allows non-hopefuls to become so darn good at defending something they believe in.

As the team of unlikely heroes provokes a good dose of the comedy, so does the primary villain. While delivering the flamboyant White Goodman, Stiller brings an obnoxious charm to the role that you would suspect other actors to overlook; he's flashy, goofy, overzealous and out of touch with reality, and his dialogue has a certain wit that, in any other kind of comedy, might have seemed out of place or too forced ("No one makes me bleed my own blood," or "Your gym is a skid mark on the underpants of society"). Stiller, like any other comedic actor, is not always successful when trying to be very flashy (consider the over-the-top mess of "Zoolander," for example), but in this context (and in this particular delivery), it compliments the movie.

As both the writer and director, Rawson Marshall Thurber does a pretty good job of giving otherwise substandard material a very energetic edge; though the script isn't exactly earth-shattering by any means, its consistent sense of comical timing keeps the level of amusement high (and the fact that the picture only runs 92 minutes means that he doesn't try to over-stretch things, too). At a time when the theater has seemingly been contaminated by painfully-bad action flicks, how nice it is to see a little comedy like this that makes you smile occasionally without insulting you in the process.