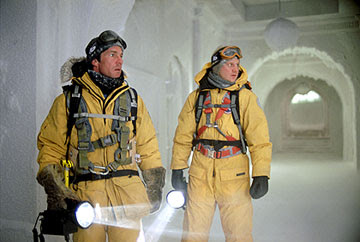 "The Day After Tomorrow" follows a small group of characters around as they prepare—and ultimately witness—global warming give way to a new ice age in the northern hemisphere. That the movie manages to accomplish all of this in a span of days in the story is your first clue to how unscientific the material is, but the fact that it manages to do so while allowing Los Angeles to be torn up by Tornadoes and New York be buried under a rising waterline makes it perhaps the most comedic disaster picture of all time. Is this an effective prospect? Alas, not when director Roland Emmerich and his writing partner Jeffrey Nachmanoff want the material to rise above silly escapist entertainment and be regarded as a legitimate source of information. The idea that we have politicians in this country who are using the film as a platform to discredit the Bush administration's global warming plan would probably make a better movie than what is served up here.

Disaster scenes, at least, are neat no matter what the context, and in "The Day After Tomorrow" the sights (and outcomes) of major cities being destroyed by the harsh elements is a gimmick that is pulled off without reservation. Unfortunately, what Emmerich has devised to surround such moments is a premise of such moronic proportions that the visual highlights are unable to stand on their own; they get buried behind a screen of shoddy characterizations, useless subplots, cheesy ploys for tension and a conclusion so insulting on so many levels that it left me in a fit of rage as I exited the theater.

The movie opens in Antarctica as Jack Hall (Dennis Quaid) and his fellow paleoclimatologists (is that a real word?) are studying a continental ice shelf. Big on the theory that areas like this will one day melt and drastically shift Earth's weather patterns, Jack is left awestruck when the shelf itself splits just as he is there, jump-starting paranoia about oncoming climate changes that result in him giving a lecture on possible scenarios of global warming to several world leaders at a conference in New Delhi. Few of them take the concerns to heart, not the least of which is the U.S. vice president, a guy who always seems to be running around but never actually doing anything of importance (and, I'm sure it's no small coincidence that he bears a striking resemblance to current Vice President Dick Cheney). But before too long, Mr. Hall's personalized weather models regarding this oncoming change in climate are being sought after by Terry Rapson (Ian Holm), a weather monitor who is noting several drastic temperature drops over the Atlantic. If his theory proves to be true, North America and Europe could be the prime centers for a new ice age.

Jack, as required of any hero in a disaster story, has family members who will be greatly affected by these kinds of scenarios. Consider his son Sam (played here by Jake Gyllenhaal), a braniac who is at a competition in New York when the city gets bombarded by a relentless rain storm; he and his father are not always on speaking terms (mostly because Jack is never home long enough to know much about his son's life), but when the looming threat of a disaster in the area is foreshadowed by catastrophic weather changes in other areas of the world, he provides all the necessary warnings. "Stay inside if the temperature drops. Keep warm. Don't go outside!" Beyond this, however, the movie doesn't have much to say about its characters other than that they're just routine players in a disaster movie—live long enough so the plot can dispose of you in one disastrous form or another.

And, as expected, everyone in the movie panics in a laughable manner at every possible interval. Giant hail stones destroy homes and injure millions in Asia. Deadly tornadoes rip through Los Angeles and turn towering skyscrapers into mere piles of rubble. And just as the New York rainstorm forces city residents to seek out higher ground, the metropolis is nearly wiped out by a massive tidal wave (think of the "Deep Impact" climax taken down a slight notch). But what is the only thing for any of the characters to do? Stand around and scream, of course. The movie has little empathy for them; they are just little insects in a giant scheme designed to get them all squashed before the conclusion unfolds. I am, of course, making a fuss over something that has been standard practice in disaster flicks since the early Irwin Allen vehicles, but the mindless ones that populate "The Day After Tomorrow" are of a slightly unique breed. Not only do the men and women in this movie run and scream at the sight of natural terror; they even hide out in buses hoping that giant waves of water will bypass them even though they are in the direct path.

My history with Roland Emmerich isn't a pretty one; this is a man who gave us, among other things, the bloated "Godzilla" in 1998, the pretentious historical biopic "The Patriot" in 2000, and that god-awful war-of-the-worlds blockbuster "Independence Day" in 1996. Such a track record doesn't make it feasible for anyone to be objective concerning "The Day After Tomorrow," but when it comes to natural disaster films, reservations can be made because the only working villain is something that can't be seen (thankfully). Here, alas, Emmerich is too engaged by the prospect of being literal to make the movie very enjoyable; his constant need to have characters shout warnings, engage in scientific mumbo-jumbo and do stare at oncoming disaster like brainless morons forbids his product from being very interesting beyond the visual level. To make matters worse, he even manages to abandon the little self-respect he has by including a scene in the movie where several characters are chased on a ship by escaped zoo wolves (who are so obviously artificial that it undermines the whole cause of special effects in the film).

But how about that ending, huh? It takes a lot of restraint not to use excessive profanity in this review to describe the feelings I had while witnessing the ending that Emmerich forces us to endure (and even more restraint to not reveal what actually happens in it here). Not only is the entire conclusion routine in the way it tries to put the positive spin on disaster, it is downright insulting in the way it tries to insist that international conflicts can be so easily set aside when an entire population is forced to vacate because their land has become a giant popsicle. I was baffled, I was outraged, and I was irritated. But for the first time ever at a disaster movie, I was also sympathetic to those characters in the film who lived long enough to be part of such a horrible resolution. At least the thousands of people who died during the freezing of the northern hemisphere didn't have to sit through what the writers had to serve up in the end like we did.