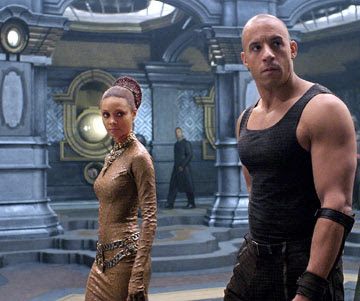 "The Chronicles of Riddick" is the best-looking science fiction movie since "Minority Report," so ambitious and outgoing on the technical scale that there are moments when the viewers are staring up at the imagery as if it were getting ready to yank them out of their seats and onto the celluloid. It is this precise merit, strangely enough, that gives the picture its only firm ground for a recommendation; strip away the distinctive and limitless production values, and what you have here is your standard superhero-in-space vehicle that surrenders great ideas to an auto-pilot narrative treatment. And that's a surprise, especially when you consider the level of enthusiasm that both on- and off-screen contributors seem to share in this material. The film's technicians see the exteriors through an eye that is reminiscent of the greats in the golden age of science fiction cinema, and the actors emerge as if they are caught up in an elaborate role-playing game that they don't want to end. A shame that the movie's script does such a notable job of undermining their work for a story that moves from one detail to the next like the most conventional Hollywood blockbuster you could imagine.

Still, the effort represents a slight growth in professionalism for Writer/Director David Twohy, who also helmed this film's highly-successful predecessor "Pitch Black." Like that picture, this one follows a futuristic rebel named Riddick (Vin Diesel) as he faces both human and non-human monsters in some sort of sub-conscious pursuit for self-seclusion. But unlike that movie, which was burdened by an overzealous style that interfered with the plot's coherence, "Chronicles" has a look that is not only lucid, but atmospheric, polished and menacing all at the same time. Twohy still has a long way to go if he expects to be embraced as a legitimate storyteller, but as a proletarian concept artist, he proves that he has both the imagination and the skill to build exciting worlds for his characters to interact in.

The story takes place five years after the events of the first film, with Riddick, now heavily bearded and in hiding against the legal system, being pursued by a group of bounty hunters who have been hired to bring him to planet Helion. There, Imam (Keith David), a survivor from the first movie, is on the verge of madness as his home planet becomes the newest target of invasion by a race of religious fanatics named the Necromongers, who scour the universe for rebel words in attempts to convert mass populations to their faith. Imam's experience with Riddick tells him that the rebellious character may be the only source of hope he has in preserving Helion's legacy, but the buff anti-hero isn't too keen on the notion of helping anyone out but himself. Even when he is told by the air elemental Aereon (Judi Dench) that he may be one of the last surviving members of the powerful Furion race, he is indifferent. And even when the Necromongers and their gargantuan space vessels plant themselves on the planet surface, Riddick has this look on his face that suggests he may do nothing more than stand back and allow the invaders to simply do what they came to do.

Unfortunately for him, the Necromongers are no ordinary aggressors. They are vengeful, they are ruthless, and they are so fueled by their religious fanaticism that it makes them uncompromising villains in the eyes of all those who oppose them. Riddick, of course, is opposed to any notion of establishment to begin with, and that makes him an easy target. This notion is stressed even further when the race's leader, Lord Marshal (Colm Feore), passes into a crowded room and rips away the very souls from certain onlookers in order to convince others, including him, to follow their faith.

All while these plot details are being established, the movie offers up a platter of visual spectacles that are beyond mind-blowing: characters dressed in eloquent wardrobes, expansive halls in which echoes seem to carry over from events of the past, and space ship exteriors that seem less like metal shells and more like remnants of ancient Egyptian architecture. Even the darker and murkier exteriors, built around the continuing notion that browns and grays are synonymous with the concept of a post-apocalyptic future, have something going for them. Reflect, for instance, on a prison planet dubbed "Crematorium" in which inmates must live beneath the jagged surface because the intense sunlight will fry anything that is exposed. Twohy's cinematographers and art directors provide the setting with an essence of thorough hopelessness -- the twisted metal, the dust in the air, the constricting prison cells and deep round pits that seemingly house all of these things for miles below -- and by having a suspicious figure like Riddick standing at the center of the action, they give the establishment a haunting richness. If Diesel's character was as genuine as you or I, this is exactly the kind of place we'd expect him to kill time.

How the movie utilizes its screenplay, however, is not nearly as appealing as the way it manages the action or visual effects. At the very basic core, the premise is a carbon copy of at least 60 percent of all science fiction post-apocalypse tales: you have this big and brawny guy who challenges an entire civilization to save the legacy of another, and every once in a while he has a few one-liners to spout (although to Diesel's credit, he has enough charm to make the latter element tolerable at times). That would not be such a bad approach to relive if the script actually took things a step further, but it doesn't do much of anything that isn't conventional. Twohy doesn't even give us much incentive to explore any of the supporting characters other than those who were survivors of "Pitch Black." The film's primary vixen, the vindictive Dame Vaako (Thandie Newton), has a few nice isolated scenes but it is your standard formulaic villain's assistant, and the lead antagonist Lord Marshall is so flaccid and unappealing that you have to wonder why he is even on screen in the first place.

That the movie has no relevance for the survivors of the first film in the franchise other than to provide the audience with an occasional familiar face is but another troublesome detail with "The Chronicles of Riddick" (Imam, believe it or not, does a complete disappearing act just as the action starts heating up, and the movie offers no kind of explanation why). This is a plot that does its darnedest to have the title character jump through as many deadly hoops and traps as he possible can on his way to defeating the Necromongers; why can't any of the supporting players do the same? The script has no faith in them. At its very worst, at least "Pitch Black" was motivated enough to make use of the ensemble; now, it's as if we're seeing an ordinary hero being forced to do all the work while everyone else is a spectator on the sidelines. A picture with enough incentive to create an enemy as vast and dangerous as the Necromongers deserves multiple forces of opposition, and the fact that Riddick acts alone only weakens the appeal of an endeavor that is masked as a full-scale sci-fi epic.

Diesel, thankfully, remains a likable and convincing screen presence despite his continued typecasting in these muscle-driven roles. His first outing as Riddick is often cited as the reason his career in Hollywood took off; in revisiting that role, he reminds us that, unlike many of his closest competitors, he continues to bring a certain charisma to his characters that give them a sense of gentleness amongst all the ominous and rugged features. His sense of purpose doesn't undergo the necessary evolution that you would expect here, but who cares? Riddick is a bad-ass who should be enjoyed for what he is.

"The Chronicles of Riddick" could have been something great -- we could have been talking about a movie here that would rank among the great genre flicks of its era if not for the fact that the director refuses to break free from obvious restraints. But the movie, as already indicated, is not a complete and utter failure, either; it looks great, has a distinct style, and contains images that frequently pulsate to life. A truly great science fiction film would have ensured that the foreground didn't disappear into that kind of background, but at least the director gives us something worth gawking at in the meantime.

Sci-Fi/Action/Thriller (US); Rated PG-13 for intense sequences of violent action and some language; Running Time: 115 Minutes