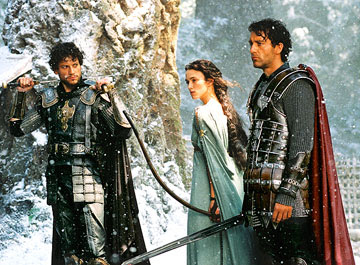 The opening credits of "King Arthur" suggest that the filmmakers are utilizing "recently discovered archaeological evidence" as grounds for a contemporary interpretation of the story, a claim that leaves almost as much doubt in mind as the relevance of yet another retelling of the famous legend. Let's be honest here: do we really need to see another version of this material? Consider the fact that John Boorman perfected the narrative when he did "Excalibur" all those years ago, or the notion that "The Mists of Avalon" has already successfully tweaked that perspective via a famous novel and miniseries. Director Antoine Fuqua should have known better than to insist on pursuing a project in which the appeal of the concept lacks the very basic of purposes, especially considering his mediocre past endeavors ("Tears of the Sun" and "Training Day"). But then again, to second-guess anyone who succeeds Michael Bay as the primary choice for directing a movie is likely as pointless as the premise itself.

As the movie opens, there is an air in the theater that suggests one of two things: either the viewers only showed up because "Spider-Man 2" was sold out down the hall, or they were invited by someone else with the promise of not having to pay the admission price. Audiences are simply not interested anymore in retellings of King Arthur and his Knights of the Round Table. Surprisingly (and thankfully), however, what they get here is not anything resembling a conventional interpretation. Fuqua's "King Arthur," in fact, plays so unlike its source material that only the film's title is an indication of where the groundwork comes from. There is a slight awareness to characters and places here, but watching the plot unfold is like wandering through an old tunnel that has undergone enough maintenance to emerge unrecognizable.

This may perhaps create the impression for some, especially purists, that Fuqua's direction and writer David Franzoni's script have botched the material, but surprisingly enough their revisions succeed. "King Arthur" isn't just entertaining popcorn fluff, but a thoroughly polished endeavor that is skillful, intriguing and complex in the way it reinvents the essence of legend and tries to view it as tangible history. Gone are the wizards and witches and all their spell-driven trickery; in their place is a concept that sees Arthur and his knights as participants in a cataclysmic religious war between Romans, Pagans and Saxons. The movie isn't about taking sides, though; keeping in line with what history itself has taught us about religion, intentions are blurred between protagonists and antagonists -- their personal convictions come down to themselves and not necessarily the sides they follow. In either case, though, they didn't call it the Dark Ages for nothing.

Clive Owen plays the title role, a guy who, contrary to the title of the picture, is not so much a king as he is a puppet. At his time of power, he and his comrades are commanders of an army instituted by the Roman Empire, and the round table that he and his knights are supposed to gather at becomes a background distraction; everyone in the film is too busy elsewhere to find time to sit at it. The empire, of course, is regarded by the British populace as an invasive force, on their soil simply to try and convert Pagans to their Christian faith, but the knights are less concerned with that prospect. Why? Because both groups are threatened in the north by a growing resistance of Saxons, who are coming down into the south and wiping out any colonies and villages in their path (the movie foreshadows the seriousness of their conviction early on when it reveals that the country is divided by a wall, and later when the commander of the resistance insists that his men not rape the village women because it might taint their race's purity if they were to carry children).

As a man whose moral code is continuously in a tug-of-war, Owen does a nice job of giving dimension to his persona. We like King Arthur (that is only a natural reaction), but we also see that he is flawed, sometimes illogical, and even clumsy in the way he stands at the command of others (hey, if you were a Pagan defending the mark of Christianity against your peers, you'd be a little confused about yourself too). His closest comrade, Lancelot (Ioan Gruffudd), sees these flaws and does not hesitate to point them out, often leading the two to engage in heated verbal argument that lifts the tension between them gradually as the film unfolds. Thomas Mallory's "Le Morte d'Arthur" would be happy to point out that the primary cause of friction between Arthur and Lancelot comes from both of their relationships with the fetching Guinevere, but in this movie she is portrayed with such independence and fearsomeness that neither man seems to have enough courage to let that be the case. Instead, what we get is a series of well-acted scenes in which the isolated characters pull off the masks and reveal their true humanity. The acting is neither forced nor pretentious as it usually is in highly-stylized costume epics like this.

The battle scenes are also noteworthy. Picture, for instance, a show-stopping sequence in which Arthur's men attempt to drive away an organized offense of Saxons by trying to trap them on a frozen lake and forcing them to crack the ice beneath them. David Franzoni's script gives scenes like this such skill and enthusiasm that they stand out in contrast to the battle scenes of the recent "Troy" and "The Alamo." Here, the camera isn't just moving in a fast-paced manner and trying to blur the action into incoherent nonsense; the conviction is smooth and dynamic, and the film doesn't demand background players to stop all that they're doing just so they can see the main stars fight in a battle to the death. It is a wall-to-wall effort that doesn't confuse or disorient in the process.

"King Arthur" is such an impressive effort all-around, in fact, that it comes as a major letdown when the movie makes some serious errors. In terms of expository information, the movie doesn't actually give many of its characters enough back-story to make them stand out as much as they should. Merlin (Stephen Dillane) is the primary victim here; in whatever interpretation we have seen him in, this is a character whose wisdom and dedication have allowed him to emerge as a highlight in the narrative; in this film, the movie gives him little to do but command an angry resistance of Pagans, and not even giving him an established motive in the process. That comes as a major letdown, especially considering how much the writer works to give some previously minor characters such a biting edge (Franzoni's Guinevere, a rebel who was trapped and then freed from a Christian prison, probably has more backbone and spirit here than we have ever seen).

I could go on about the movie's other flaws -- it is too short for the broad premise, for instance -- but several of these quibbles are relatively minor compared to the merits that both Fuqua and Franzoni offer here. The movie looks and feels its times period, the imagery is attractive, the characters are neatly utilized and the narrative takes us on a journey that is exciting, thought-provoking and memorable all at the same time. Purists to the legend of Arthur and Camelot will see a film here that pushes too many buttons to be admired; those of us who embrace the chutzpah of filmmakers who enjoy tinkering with establishment, however, will instead see a brave and admirable little endeavor that creates a whole lot of grand chaos in just a little over two hours.

Drama/Action (US); 2004; Rated PG-13 for intense battle sequences, a scene of sensuality and some language; Running Time: 130 Minutes