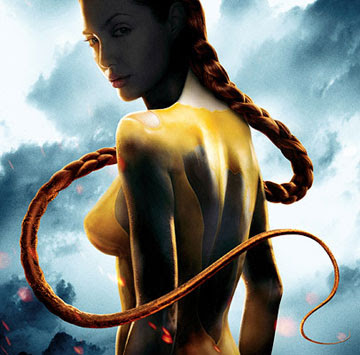 For all the visual wizardry at work on screen in Robert Zemeckis’ “Beowulf,” it’s a wonder I found myself leaving the theater feeling lifeless and unenthusiastic. Certainly, here we are at the helm of a true technical achievement in cinema, a complex and rigorous endeavor that marries the real and the digital with the kind of detail that makes its nearest cousin, “The Polar Express,” look almost like a dress rehearsal in comparison. But perhaps that is the root of the conflict at hand; for every whisker and every pore that is visible on the face of an actor who has been completely altered by the multi-dimensional capabilities of a computer-generated image, there is a facial expression, a sign of human feeling and even basic mannerism that is lost in the system. Characters do not pass very basic plausibility tests because there’s no outlet for them to warrant it – they can’t be merely cartoons because we know there is flesh behind the gimmick, and we can’t accept them as human beings because they appear to lack very basic facial functions. Are they supposed to look authentic? Are we supposed to consciously acknowledge that they are thespians simply being represented on-screen by elaborate shell casings? The movie offers no answers, a terrible dilemma at a time when this bizarre and uncultivated sub-genre is in desperate need of rationale.

That it is an endeavor with a distinctive style and flair only intensifies the frustration. It is a great movie to look at, intensely ambitious in its thrust, and sometimes maddening in the way it allows its technique to completely upstage the possibility of an interesting story occurring in the foreground. Loosely adapted from the famous epic poem of the same name (and when I say “loosely,” boy do I mean it!), the plot centers on a kingdom of Danish settlers high atop a cliff, where men revel in the benefits of their notoriety without much in the way of outside threats looming in front of them. Or so they think. On occasion, in moments of celebration within the walls of the mead hall, they are visited by a ghastly disfigured creature named Grendel (Crispin Glover), whose ferocity is outweighed by both his ugliness and ability to slaughter decorated warriors with relative ease. He is, to these isolated civilians in a secluded kingdom, a grave nuisance, a beastly being that is not simply an object of fear, but a symbol of continued defeat. The men of the kingdom are emasculated by his strength, although no one, not even the headstrong Unferth (John Malkovich), will come directly out to say it.

Enter Beowulf (Ray Winston), a decorated and reputable warrior from a far-off land who has been summoned to the realm by King Hrothgar (Anthony Hopkins). His achievements heralded by peers, his status as a war-driven icon cemented in the thought of his accomplishments being told of in tales by great bards for generations to come, he is a man not without ego or arrogance; at the same time, he is someone whose motives are pure and dedicated, and when it comes time for he and his comrades to settle into the mead hall and wait for the fearsome Grendel to make its expected appearance, he is firm in his plan without over-stepping his own confidence of the situation. We believe he is exactly who he says he is and trust that his resolve will persevere. Words, of course, escape me if I attempt to make this point while also describing the inevitable Beowulf and Grendel confrontation featuring the hero completely naked and without weapons, but it makes for one of the most laughable sub-climaxes I have seen in a movie of this nature.

What is the nature of the movie, though? Good question. The epic poem does not put up any sort of grand facet to create the assumption that it is about more than what the written words indicate – it is simply a story of heroism, uncomplicated and straightforward. Writers Roger Avary and Neil Gaiman apparently have a different perspective, and their attempt to reconfigure the message of the original source material is a forlorn misstep; trying long and hard to flesh out the poem into some sort of morality play, their script places nearly all emphasis on the obvious, asking questions that are tired in their paradoxical framing, and offering rhetoric that feels almost prosaic in context of a production as elaborate and stylized as this. Robert Zemeckis’ definitive tragedy when it comes to this technique is not that we are assaulted with over-stimulating visuals or noise, but that the technical enthusiasm in the screenplay really never comes close to being equally as zealous as that of the production. His previous film, “The Polar Express,” suffered the same fate as “Beowulf” does, but at least the earlier endeavor did not demand more than just the basic approach when it came to the plot. Here, characters are engulfed in statements on human temptation and the idea that humanity appears more monstrous than the actual antagonists, but didn’t we already know all of that?

Moreover, the technical wizards seem to be waging a war with cinematic reality that lacks a central purpose. In its prior incarnations, this motion-capture CGI approach, in which actors are filmed living and breathing and then animated over using a computer, was used not as a statement in an ongoing debate about digital actors replacing flesh and blood ones in movies, but as a technique used to intensify certain visual characteristics not ordinarily revealed by the camera in a live action setting, whether they be on a person or in the sets. Some would say the approach adopts traits of Greek theater, in which we observe actors freely trot around in masks and costumes, their bodies treated as vessels of art. Alas, “Beowulf” chooses to present itself with an even more daunting challenge than it is required to. The movie believes in more than just the showmanship of the technique, it wants to pass itself off as some kind of sub-reality. Perhaps in certain instances, such as a striking scene involving Grendel’s mother (Angelina Jolie) emerging from a lake looking fierce and scorned while her head is pointed forward, the approach is a promising one. But no amount of attention to detail is able to distract us from instantly acknowledging the computer’s short-comings as a producer of normal reaction. Animation cannot replicate human emotion, cannot force characters to respond or express feelings, and cannot serve as an alternative to the elements that make living and breathing actors distinctive in a story that requires them to behave naturally. The movie makes glaring errors in judgment in that regard, and audiences stare on in sober disbelief when trying to decipher exactly what characters’ intentions are when it comes to specific actions. Without expression, there is no hope of revealing their reasoning.

There is an interesting theory here in some circles, a suggestion that is relevant to consider since it would help to explain away certain unavoidable issues concerning the usage of CGI in this context. Are Zemeckis and his crew giving us satire here? Do they know that the technique still lacks stability, and simply want to present that case under the ruse of irony? It’s an interesting argument, but not one that I subscribe to. No one would ever squander this kind of energy or budget on something simply for the sake of revealing its inefficiencies. Satirists are not that ambitious. No, I believe the intent in “Beowulf” is as pure and straightforward as its own screenplay. The movie does not want us to look askance at the animation; it wants us to abandon cynicism, to accept the façade as an alternative to reality, to embrace an illusion that potentially has enough depth to capture the complete essence of a living actor. What bitter irony it is to allow such a bewildering and miscalculated concept be the backbone of a story seeped so heavily in themes of humanity.


Action/Animation/Thriller (US); 2007; Rated PG-13 for intense sequences of violence including disturbing images, some sexual material and nudity; Running Time: 113 Minutes