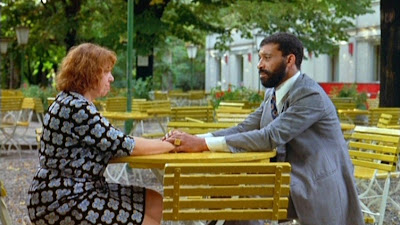 If German history books must paraphrase the sum of its important contributions to world cinema, all statements begin and end by referencing the country’s two most essential eras – that of “Germanic Expressionism” in the 20s, and the more recent “Neuer Deutscher Film,” which began in the 60s as a way to usher in a generation of thinkers who thought beyond the proverbial boundaries of their culture. In both instances, young aspiring artists were conditioned by the fallout of Germany’s involvement in two World Wars, and under the weighted influence of a social structure seeped in uncertainty, they were eager to embrace the fires of chaos in order to obliterate the illusion of harmony that was used as an oxygen mask.

Many spoke within these opportunistic windows, some loudly enough to reach beyond their borders. The brilliant Werner Herzog was one such visionary who found triumph in the melting pot of New German Cinema, and made remarkably effective films on miniscule finances that transcended the geographical boundaries they were intended for. Another of these important visionaries was the conflicted but prolific Rainer Werner Fassbinder, whose career lasted only 15 years but consisted of some 40 films, many of which were done on a shoestring budget, and in some cases churned out at a pace that would alarm workaholics.

The sobering experience of watching his powerful drama “Ali: Fear Eats the Soul” in a generation when audiences now fully know of Fassbinder’s tumultuous personal life gives us an eerie insight into the inner-workings of his ideas. Often described as a compulsive sort who often exploded into fits of rage during his shoots, his crews were close-knit and familial, usually with the knee-jerk purpose of protecting one another from his explosive demeanor. The actress Irm Hermann conceded in interviews that her relationship with the tortured director over the years was often violent, and even mentally and physically abusive – and indeed, she didn’t even want to be an actress in the first place, but came into the profession as a result of calculated persuasion on Fassbinder’s part. The nature of his being was so clearly on display in many of his films that they became a road map to the deconstruction of his eroding psyche, and when he died in 1982 at the age of 37 as a result of a lethal combination of sleeping pills and alcohol, few were surprised. The writing, for many, had already been on the wall for a good while.

Here is the movie where those notions are clearly suggested in the most direct manner. In a stuffy bar in some corner of German city life, a collection of Moroccan immigrants occupy time with drinks and card games while a lanky blonde at the bar stares off in flaccid disinterest. All eyes move towards the door when it opens and reveals a short frumpy German woman standing in the frame, and she parks herself at the table just to the left of the entrance. Camera shots cut back and forth in emphasis of a forced perspective of great distance between the bar and the table, and piercing eyes from the barmaid –and her Moroccan guests – suggest a discomfort bleeding over their shared presence.

The woman, a hotel cleaning lady named Emmi (Brigitte Mira) is native German and yet very obviously the stranger in this displaced cultural bubble. She asks for a cola, paying no heed to the gazes. A woman at the bar leans over to an immigrant everyone refers to as Ali (El Hedi ben Salem), and suggests he ask her to dance – not from a place of kindness, but rather a desire to humiliate. As the two share a mechanical trot at the center of the bar, they exchange chunks of conversation that seem unfiltered by the social awkwardness in the room. In those moments, nothing exists other than their acknowledgement of each other’s own uncertain presence, and the piercing stares of the bewildered onlookers act as daggers with dull edges.

The dance causes an invisible wall between them to dissipate. He volunteers to walk her home, and treats an invitation to join her for coffee in her upstairs apartment as an unlikely kindness. Their discussions are simple but probing, and when the rain stops, Ali indicates he must return home to prepare for work the following morning. But what is home? For him, and no doubt countless nameless immigrants who came to the country for work in the 70s, it is a room shared by five or six friends with maybe two beds between them. Emmi is somewhat saddened by this revelation, though perhaps not completely ignorant of it. She asks him to stay the night, and he accepts without a hint of hesitation. Her unspoken reason to pose the question is clearly congruent with Ali’s desire to say yes: both of these people lead parallel existences of diminished value, and for them, being alone is a tragic commonality that carries its own unwavering significance.

The picture operates in passages of such raw and resonating veracity that they seem almost too stark to be in a movie. In some capacity, they were; Fassbinder, who sympathized greatly with the oppressed and made them his unsung heroes in most of the films he directed, lived a relationship parallel to his female protagonist. He too fell in love with a man who was considered by social standards an inappropriate choice, and endured silent judgments as a result of acting on those feelings. Ironically, the object of his romantic inclinations in the early 70s was the same man who stars here as Ali – a strong and handsome man with staggering brown eyes – and that one detail leaves us with further contemplation. Is Emma really just a reflection of the long and forgotten working class of Germany fading into the background, or is she the direct embodiment of his own persona? My guess would be a combination of the two, though in my research I could never find a direct admission on Rainer’s part.

When the words “Fear eats the soul” are uttered during a tender but staggering moment of personal awareness, it’s like catching lightning in a bottle. Emmi and Ali are dreamers who are smothered by the overreaching disapproval of their society, and to hear the words – and to see them believed – encourages the faith we have in their unique situation. The Moroccans used this one phrase religiously; in the movie, it rolls off of Ali’s tongue so effortlessly that it seems as instinctual as taking a mere breath. The source of the fear, at least on Emmi’s part, does not exist for foolish or unfounded reasons either. Here she is, a woman in her 60s, entertaining a gentleman who is younger, more agile and of a different ethnic origin, and doing so in a nation made up of incomprehensible communal clout that relegates its primary populace into a mob of paralyzing stares and silent judgments.

Fassbinder intensifies the level of those gazes by shooting the movie with the same candid aesthetic used in the critical bar sequence that opens the picture. His tone evokes simplicity but does not inspire pity. When the characters share joy, there is relentless desire on our part to cheer them onto success, and when their aspirations are undermined by the power of what others think of them, it comes as a crushing blow to our dogged optimism. The most striking sequence occurs when Emmi discloses the news of her and Ali’s surprising nuptials to her children; in one continuous shot, the camera picks up all of their reactions by transitioning from one face to the next, revealing the dreadful reality of her decision: if commoners who pass her on the street can’t simply let her be, how in the world can she expect any of her children to embrace this marriage when they are victims of the same cultural upbringing?

Some films announce themselves with unspoken intentions of authority, while others are content to inherit the ideas of others for provocative means. Indirectly, “Ali: Fear Eats the Soul,” which was made with almost no money and in a quick two week shooting period, treads brazenly through the eroded footsteps of Shakespeare’s “Romeo & Juliet,” and even finds some commonality with the amorous nature of the Bronte sisters. More unequivocally, Rainer was inspired by the movies of Douglas Sirk – in particular, a film called “All That Heaven Allows,” in which an aged widow falls for a lowly gardener who is much younger than she. Unlike the fastidious overachievers of the Hollywood machine, however, Fassbinder refuses to gloss his movie up in any sense of fanfare. At a brief 94 minutes, there is no time to contemplate or emphasize the psychological implications of the events, but only to convey them before moving on to another series of realities. But this does not undermine nor deaden the emotional impact of the film. The truth of the matter is that this story had already been manufactured on countless occasions, and by the time the concept came to Fassbinder’s clutches, all that was left was the uncultivated center.

The movie does not apologize for overlapping emotions. The happy times are warranted, and refreshing. The silence of the passing cynics who observe the two leads with certain prejudicial antipathy is deafening. When the pressure is too great, Emmi and Ali do not always endure, and do indeed find moments of great tragedy in their marriage. But this is their reality, and Fassbinder’s, and even ours. When two souls of such distinctly opposing traits bond under the weight of their aligned conditions, the effects alternate between passion, joy, faith, frustrating endurance and, sometimes, a loss of strength in the conviction of one’s own pursuit of a happily ever after. But in the end, as Emmi so poignantly reminds us during one last dance with her handsome husband, all one can really hope for in this world is a little kindness.

"Ali: Fear Eats the Soul" is the fourth article in this series.