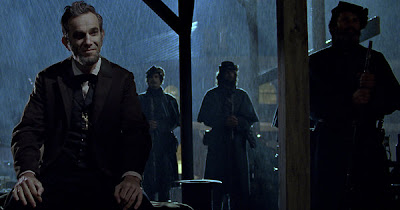 The opening scenes create a clear distinction: war is not the sole component dividing this society. The man in the tall hat seated in the center of a military encampment stares beyond the piercing rains and sees his supporters trapped in a cycle of building and preparing, mindful of the reality that many will not be left standing alive after the inevitable battles that remain to be fought. Their drive nevertheless is inspiring, and reflects the enthusiasm for the ideals being set forth by the visionary who calls himself the commander-in-chief in these dark and tumultuous times. A young black supporter wanders nearby and reminds the president, somewhat unintentionally, of the importance of the mission: his eyes beaming with a light of hope, he recites the introductory lines of the famous Gettysburg address. For him, and thousands of other slaves who were victimized and persecuted for countless generations before the dawn of the civil war, these words were more than just a call for important change: they were, in essence, the keys to opening the door that had long been shut on a sect of population. The subsistence of these proclamations underscores the greatest desire of all human life, which comes down to, quite simply, freedom and liberty for all.

The doctrine of the great Abraham Lincoln has become so ingrained in our minds as students of history that it defies a necessity to explain details. He may have very well been the greatest Republican president that ever lived, a thinker who was mindful enough of the future to ask the right questions long before they were seen as customary. What textbooks do not evoke, perhaps, is the impassioned scope of the ideal, which stampedes off of printed pages in such blaring notes that they, alas, usually sidestep the prominence of the author’s source of inspiration. What was it that truly drove him? In the face of a society that was conditioned on the belief that appearances somehow made others less deserving of basic human rights, how did he find the courage and conviction to stare back at a society seeped in ignorance and demand, quite unapologetically, that they eradicate an entire way of thinking for the sake of equal opportunities?

These are the questions at the heart of “Lincoln,” a movie of challenging political and social implication that finds its center not in the details, but in the emotional involvement of its important players. Here is the movie that Steven Spielberg has waited to make for most of his professional career – and indeed, after mastering the art of historical drama with “Amistad” and “Schindler’s List,” the undertaking is apt. What is perhaps most effectual in his depiction, and certainly surprising, is the presence of a simple human figure standing at the center of the action. The great Honest Abe is not an archetype or even a great philosopher through Spielberg’s eyes, but, in actuality, just a nice guy with a big heart who just happened to be around at a time when the country needed a delicate soul to step into the most powerful office in the nation. That understates the cause of the movie’s portrayal, and gives it added perspective.

The film deals with the final months of the Civil War in 1865, when the violent battles had become a staple and the real conflict began moving into the congressional chambers. Lincoln sits at the head of a table regarding his cabinet with simple but ample conviction: the 13th amendment is now on the house floor – the one that will abolish slavery – and everyone in his circle is going to have to work diligently to have it become national law. This will especially be important in the hands of Lincoln’s Secretary of State William Seward (David Strathairn) who believes any support for the amendment comes only out of a desire to end the bloody war rather than to free those caught in bondage, but is nonetheless fiercely devoted to the cause.

Arming themselves for the congressional fight, however, is nearly as tall an order as the fight itself, and because Congress’s make-up of Democrats and Republicans is polarizing on such a matter, it makes the impending argument much more intense. Spielberg, we suspect, is drawing intentional parallels with Lincoln’s congress as with those of modern times in their discordant viewpoints, but the civilized nature of political language is very much a formality here. Thaddeus Stevens (Tommy Lee Jones) in particular sees no need for keeping the matter amicable, and speeches (and sometimes even just general editorial comments) are delivered with absolute spit and vinegar on the House floor. We don’t anticipate anything more: worn down from an exhaustive fight and countless casualties over such a heinous conflict, relaxed feelings on this matter have long been abandoned by all the important parties.

At the core of this tension is a figure so solemn and earthy that he seems displaced in culture, yet is distinctly tasked to send ripples through a political landscape saturated my misplaced arrogance on such a personalized social conflict. As an ideologue of the core values of great philosophers and his national ancestors, Lincoln sat distinctly outside of the political machine and governed on the crux of personalized oratory – miraculous, if you think about it, since he was fairly uneducated, and seen as a backwoods candidate incapable of understanding the full scope of his professional landscape. Conveying this in a portrayal of seamless embodiment is Daniel Day Lewis, who stands in the framework of this figure with only general brush strokes and then runs with the characterization. He hits all the right notes, and does so without seeming labored or calculated by the convictions of the plot. Even when the story necessitates the president operate within the rules of the Washington game for the sake of victory, there is the sense through Lewis’ portrayal that he is instinctually in control of a fairly simple journey. The best of his scenes, moreover, are private matters; when there are arguments between him and his grieving wife Mary (Sally Field, also confident and effective) over an unresolved grief regarding the death of their child, an underlying passion emerges from within.

Much of the movie’s dialogue is extracted from “Team of Rivals: The Political Genius of Abraham Lincoln” by Doris Kearns Goodwin, and makes full use of the complex intricacies of political lingo. This also creates a certain difficulty for general audiences, who almost have to be polyglots in order to fully comprehend the intricate subtexts and euphemisms that become important in the evolution of the legal conflict. Because this crux is mandatory in the movie’s resolve to be just as dedicated to the final throws of the amendment’s potential passing as it is to the portrayal of Lincoln himself, there are times when the parley is simply too maddening to comprehend fully. Repeat viewings offer little additional help. After three of my own, I feel I am no closer to understanding a lot of the buried insights contained in the movie’s political scenes, many of which occur on a House floor that contains brief glances of faces impossible to keep straight, and a narrative that is almost overrun with doctrinal intrigue. I concede, however, that any successful movie by any director about this story could have not done without them.

Political overtones aside, the focal point of the movie is congruent with what Steven Spielberg has used as a driving influence for most of his career: the idea that justice exists from within the sphere of ordinary human feeling, and that there is no greater motivator. There is little room for an alternative in the face of something as affecting as the concept of human slavery, just as there was only one path for “Schindler’s List” to take concerning the drive of its characters. The virtue in this approach is that such complex historical tragedy, usually reduced to unfeeling footnotes in textbooks and high school curriculums, now has the distinct opportunity of being seen within the fervent context of its origins. “Lincoln” is many things – decisive, meaningful, engaging and well-intentioned – but the key ingredient is its ability to relay the history through the eyes of a delicate soul who saw inhumanity, and rejected it for the sake of a better future. This is a wonderful film, full of detail and behavior, and one that lifts broadened historical details into a poetic marriage of humanity and triumph.

Drama/War (US); 2012; Rated PG-13 for an intense scene of war violence, some images of carnage and brief strong language; Running Time: 150 Minutes