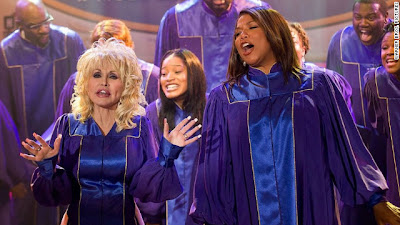 The title “Joyful Noise” is as much a misnomer as you can find when it comes to descriptive movie names. Noise it is, joyful it is not. Somewhere in some dark and quiet room, potentially with sad music playing softly in the background, the person who opted to fund this ill-conceived comedy is sitting in dead silence with his head in his hands, shamed by the same question that all investors who once faced financial ruin have pondered over time: “where did this all go wrong?” Endorsing the movie to any audience with favorable IQ points would be an insult, but there is a certain morbid fascination I uphold in what viewers with some knowledge of church choirs would think of what they see. My gut tells me their reactions would be even more spiteful than mine, and the enthusiasm in those convictions would no doubt be more energetic than anything the filmmakers have conveyed.

Imagine how a story conference for this movie probably played out. The actors gathering at the table for initial script readings must have been either very uncomfortable, or very good at pretending to be inspired so they could get closer to a paycheck. I highly doubt that some of the more notable stars wouldn’t at least speak up on the obvious. Who, honestly, could be thoroughly excited about this premise, which is essentially a direct rip-off of “Sister Act 2: Back in the Habit” – in itself a bad movie? How did Queen Latifah feel about her obsessive character stampeding through sequences like a tyrant blatantly overlooking logic and hindsight? Did any of them find the dialogue pretentious? Were there chuckles all around at the suggestion of a corny Michael Jackson tribute being shoved in to the early scenes? And worst of all, was Dolly Parton really content to reduce herself to a character that comes off as a cheap exaggeration of her own comical personality, but minus all of the actual merriment?

The movie opens at a choir competition in which the focus of the story, the Pacashau Sacred Divinity Choir, is competing for major awards. During their performance, the choir director Bernard (Kris Kristofferson) takes ill with chest pains and is rushed off stage, and in the next scene, we learn through brief dialogue exchanges between his wife G.G. (Dolly Parton) and Pastor Dale (Courtney B. Vance) that Bernard passed away from an apparent heart attack. That leaves the future of the choir in a certain clout; G.G. obviously wants the position of choir director and believes it belongs to her out of loyalty, but Dale thinks Vi Rose Hill (Queen Latifah) would be a much stronger choice: she is a strong singer, fiercely dedicated to her faith, and competitive enough to take the troupe of gospel singers back into contests after a certain period of dormancy. She and G.G. also disagree vehemently on the direction that the choir needs to take, which sets the movie up for a series of scenes in which both ladies will engage in heated arguments laced with colorful insults. The most notable: during a fight at a café, Rose pokes fun at G.G.’s large amount of plastic surgery and is met instantly with the following retort: “Who cares if I've had a few little nips and tucks? God didn't make plastic surgeons so they could starve.” Food for thought: do you think Dolly adlibbed?

There is a subplot involving Rose’s daughter Olivia (Keke Palmer) and G.G.’s grandson Randy (Jeremy Jordan) carrying those old familiar teenage flames for one another, but they are caught in the net of all those rhetorical movie dilemmas faced by potential young lovers. If she is religious and he is free-spirited, how can those opposing values be overlooked? Will the sparring matriarchs of their families even allow them to entertain one another romantically? And more important still, who of the two will have the courage to speak up loud enough to get either of the pig-headed quarrelers to see reason? Asking these questions implies that the teenagers are interesting enough to warrant them; alas, much like the homogenized scope of the story, these characters exist to occupy space for no great benefit other than to have something to look at.

“Joyous Noise” has many drawbacks, but the most unforgivable is that it is simply not funny. For two straight hours (yes, the movie really is that long), audiences stare off into these scenes like the faces on wooden masks, and find no redeeming value in any of the comedic output on display. Even after peeling away the most crippling blow, there’s an arsenal of other snags, too. The dialogue is bland and uninspired, and at other times mean-spirited. The production numbers are over-the-top and preposterous, and staged with a flair that would be more customary to drag shows. And for the life of me, I can’t believe anyone on set could possibly believe two stars as big as Queen Latifah and Dolly Parton could share the same space in a lowly gospel choir from Georgia. Setups like this are made for more obscure actors with a desire to flutter; here, with such dominating performers, the effect is jarring and unworkable.

I can’t imagine who the intended audience is here. Surely not people of faith, who will find no indication of any spiritual or religious connotation present amidst all of these vague hints to the contrary. Surely not fans of either of the leads, all of whom will look upon the screen with sadness and despair at the prospect of such talents being wasted so easily. And surely not fans of the “Glee” TV series, who too enjoy flashy remakes of well-known songs but at least have the fallback of characters that are sympathetic and likeable. Who does this movie exist for, then? I have a theory that it might endure in film schools, when instructors are having difficulty in conveying the message of how to effectively stage musical comedy on a movie screen and are seeking out an example that can characterize the deepest possibility of miscalculation. Viewing any two minutes of “Joyful Noise” I suspect will be all the education they need.

Comedy/Music (US); 2012; Rated PG-13 for some language including a sexual reference; Running Time: 118 Minutes