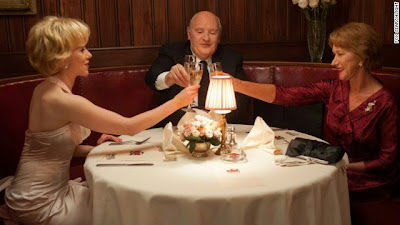 It all begins with a need, they say. Then comes the discovery, sometimes found in the low rumbles of a source off radar. And then the all-important idea: the single thought and purpose that will lay the groundwork for one’s drive. These are the seeds of inspiration that many movie directors go through in that narrow window of artistic limbo between completion of one project and scoping for another, and sometimes they come together with almost divine purpose. One wonders if this is how the real Alfred Hitchcock felt in that time of uncertainty when he went searching for new material after the success of “North by Northwest,” and found a lurid little novel in his hands that fictionalized the gratuitous crime spree of serial killer Ed Gein in the late 30s. The book was called “Psycho,” and the rest was bloody entertaining history.

To hear a movie like “Hitchcock” tell it, those desires were nearly thwarted by the protests of studio executives and colleagues, many of whom found the material beneath the caliber of a legend. Who were they kidding? The master of suspense was in full command of his ability by the late 50s, and even after notable box office flops like “Vertigo,” there was still little doubt that any material he could touch could only benefit from his distinctive spin. Perhaps he found the calls for “quitting while you’re ahead” to be enough of a dare to fuel such passions, and when he shares news of his new venture in a room of reporters and then passes around crime photos of Gein’s work with the intent to get them talking, you can practically detect the crackle of enthusiasm in his droll demeanor.

A movie about the late great director poses a question too great to ignore: how does one truly capture the idea of Hitchcock in a span of only 99 minutes? The answer is you can’t, and here is a movie that, thankfully, knows that; what it opts to do, instead, is focus on one brief snapshot of his career, in that time of clout when Hollywood suspected he was on the verge of madness by going after such downtrodden material as a horror film. It argues he got off on that notion, finding a certain sardonic pleasure in proving every naysayer wrong, including those critics who suspected he was getting too old to keep up with a new group of voices in the suspense arena of moviemaking. Too bad for them; “Psycho” may have been troubled as a production, and all odds may have been stacked against his endeavors, but history dictates that it would become his most commercially successful picture, and also the most groundbreaking. The journey to that realization is gradual but joyful, and there are moments in the film of such spiteful glee in that prospect that we find ourselves grinning in anticipation.

The crux of the picture is not in moviemaking but in inspiration. What stimulated good old Hitch beyond just the momentary desire to be spot-on in a room full of lousy pessimists? The screenplay by John McLaughlin suspects, perhaps rightfully, that the backbone of his work was the relationship he had with his wife Alma, who may have been instrumental in various stages of production in keeping the purpose of it all propelling forward. The movie knows that Hitchcock was an impeccable planner and executor but suggests he was less effective in the editing room, driven by a stubbornness that made him short-sighted. In a crucial interval of the film, Hitch shows the fruits of his labor to a board room of Paramount executives and then is seen standing quiet in isolation on the studio lot, mulling failure: the results, according to his agent, have proven disastrous. Of course they have: Alma has not been particularly present during the course of the movie’s making, notably because she has been off writing a screenplay with her friend Whitfield Cook (Danny Huston), who has given her a sense of purpose in a life where her endeavors are upstaged by a filmmaker whose star power is deafening, and whose on-set obsession with his blond leading ladies has undermined her sense of self-worth. Once she does come around to being involved, her input is invaluable; in one editing room sequence, she suggests to Hitch the importance of incorporating a soundtrack cue during the shower sequence to help propel the terror, and he finds the idea ludicrous. Care to guess who won that argument?

I doubt the legitimacy of many of these ideas, but that is not why we are here in the first place; even the late director himself would agree that film is not the place you go for factual depictions. What “Hitchcock” succeeds in is establishing a mood that is functional for its material, and the performances it incorporates are first-rate. Anthony Hopkins plays the title role as a sly wink rather than a full-on embodiment because he is far-sighted enough to know that any attempt to channel Alfred’s psyche would be in vain. But he has fun with what he has, and adopts the important mannerisms: the pout, the hunched forward posture, the manner in which he holds his hands over his gut, and even in the way he almost waddles through sets. Helen Mirren plays Alma with a little more flexibility, opting to go the route of understated in many scenes but headstrong and witty in others: prospects we would imagine are a perfect complement to living with such a popular Hollywood figure. The minor performances, however, are even more significant. James D’Arcy, who is briefly seen as Anthony Perkins, has a stellar scene in which he and Hitchcock exchange ideas in the director’s office about what the role of Norman Bates requires of him, and the delivery is precise: he nails the mannerisms, the quirks and even the flamboyant undertone in the actor’s speech. Ditto to Scarlett Johansson as Janet Leigh; not necessarily made up to look exactly like the late actress, she nonetheless possesses a presence of great glamour, and is notable in the way she holds her own on a set overwhelmed by the personality of its director. Leigh was a notable independent professionally, and Johansson embodies those qualities not as if she were just acting them, but as if she researched them as an understudy.

“Hitchcock” is a fun film, laced with the kinds of nods that are ripe pickings for an audience of movie buffs already well versed in the career of American cinema’s most impeccable film director. But it is not a great movie by any stretch, and does come with its own notable drawbacks. The biggest: a series of scenes in which Hitchcock engages in psychological chats with a manifestation of Ed Gein, who kind of operates as the director’s guilty conscience during the uncertain moments of making “Psycho.” What do these sequences accomplish? I suspect they are there to give added perspective into Hitchcock’s fixation with this bleak material, but the scenes are delivered with such overreaching dread that they are jarring in context with the rest of the picture, which is relatively lightweight and spirited. The screenplay, furthermore, doesn’t divulge any new secrets into the makings of this important film, and that’s a disappointment. “Psycho” endures not simply because it was groundbreaking, but also because it hit all the right notes in a genre that at the time knew little about following sheet music. Did the golden touches occur on the set, or was it all executed in the editing room? These questions and more are the first things any sensible movie audience would be asking in a picture of this caliber, but alas they mostly go unanswered, and any brief insight is provided in standardized passages that any skilled screenwriter could whip up out of general knowledge of film lingo.

Sir Alfred Hitchcock was more than just the master of suspense: he was a brilliant artist, focused and dedicated, who planned the scope of his films with such intricacy that his technique has seldom been replicated (he was, furthermore, one of the only live action filmmakers who would storyboard his entire picture before even filming a single scene). In a career that reads like a list of the greatest motion picture achievements of a generation, few live who have never seen and embraced one of his great works, and learned something important about the skill of moviemaking in the process. “Psycho” was only one of such golden endeavors. But it nonetheless represented a critical juncture for a director who was challenged not just by industry cynics but by the curse of old age, which sometimes imposed its own limits on prosperous entertainers. There is a moment in the film where Hopkins addresses his audience by saying “A director is only as good as his last film.” With an ego that size, it’s no wonder he made a career out of trying to surpass everything that came before it.