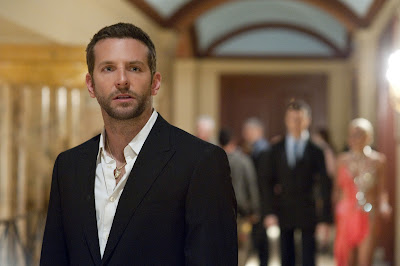 The internal conflict that overwhelms the main character in “Silver Linings Playbook” is obvious even before a word is spoken. His eyes shift to and fro with a sense of unease, and the mannered, almost calculated way he speaks to staff and fellow patients within the psych ward he is soon to be released from suggests a knack for exaggerating the truth, possibly because it makes it that much easier for him to stay within the confines of denial. But all will be okay in the long run, he believes, because “Excelsior,” the Latin word for “ever upward,” is on his lips relentlessly when in the face of his heavy-handed reality. Alone, somewhat detached and clueless as to the damage control that will be required in the world he alienated, Pat is ready to face the future head on with absolute optimism. And that means finding a silver lining in all day-to-day situations even if he has to practically beat it out of himself.

This approach no doubt makes “Silver Linings Playbook” sound a lot more serious and melodramatic than it really is, but that sort of comes with the territory when you are dealing with a director like David O. Russell, whose movies tend to make forthright observations about human nature, but also find optimism in whatever subjects they deal. After “Three Kings,” “I Heart Huckabees” and “The Fighter,” perhaps he was more interested in just getting all the tough stuff out of the way first. In this quirky and surprisingly charming vehicle, key characters learn to co-exist in a world where their issues have nearly consumed them, but are still strong-willed enough to pull back just in time to see their reality as less of a fate and more of an uphill challenge that deserves to be climbed. And for the two leads, both of whom share similar manic tendencies and are outsiders to seemingly cohesive family units, a commonality inspires not only enthusiasm for change but also a chemistry that is undeniable. In an age when the concept of comedies about possible kinships between characters is dominated by sugary devices and contrivance, here at last is a movie about real situations, real people and the natural experiences that evolve from them.

The film stars Bradley Cooper as the conflicted hero in question, a guy named Pat who, at the opening of the picture, is nearing the end of a stint at a mental hospital. Anti-depressants and mood stabilizers are dropped in his palm and he is sent on his merry way, and his first mild-mannered interactions with his parents after the release suggest psychological castration. Ah, but that is really just a façade for unresolved issues that continue to plague his emotional being, and a court-ordered visit to a therapist reveals the nature of his inner-chaos, especially after it is triggered by a particular song playing on the radio in the waiting room. One can imagine the conversations he could have with the main character in “A Clockwork Orange,” who is taught to associate Beethoven’s 9th symphony with scenes of gratuitous violence.

The source of the mental breakdown was an infidelity on part of his wife, whom he caught in the act when he arrived at home and found her with another man in the shower. The discovery turned violent, and Pat nearly killed the guy after a very brutal beating that ended with him in legal custody, and his terrified wife holding a restraining order. The town leaves little doubt of their feelings regarding his release, avoiding him on the street and shooting glances of uncertainty in his direction when passing through crowds as if anticipating a repeat offense. A critical scene in the first hour emphasizes the disturbed nature bubbling underneath Pat’s demeanor that almost justifies the general feeling, when he explodes into a manic fit looking for his wedding video and accidentally knocks his mother down, creating a scene in an upstairs window that neighbors immediately phone into authorities.

In the midst of his slow melancholic plod through a new daily routine in the outside world, he does manage to make time for friends. Two of them, a yuppie couple played by Julia Stiles and John Ortiz, invite him over for dinner one night and introduce him, with no obvious intention, to her mentally unstable sister Tiffany (Jennifer Lawrence), who is recently widowed. Amidst the dissonant nature between the two hosts as well as the apparent rivalry of the sisters, she and Pat have a certain ironic magnetism. They engage in parley that is pointedly mocking, and bond over comparing prescription medications. During a walk home, her unfiltered honesty strikes Pat in a way that he does not anticipate, and yet finds quietly refreshing. Unfortunately, because of his naïve hopes in rekindling a defunct marriage, Tiffany’s presence after that first night is met with visible annoyance, and throughout the course of the movie, their interactions consist of stubborn but half-hearted protests that escalate to loud shouting matches before becoming tender moments of commonality, sometimes in very public places.

The anchor to their plausibility is the organic quality generated by the performances. Cooper, so well-known for his supporting roles in gross out comedies like the “Hangover” pictures, is surprisingly effective here as a guy who is looking for a second chance, and channels an inner subtlety that works to great effect, especially in the mannered way he delivers dialogue. Equally effective is Jennifer Lawrence in the Tiffany role, a woman who no doubt is more abrasive than Pat but is also the only one around who sees him for who he really is, and is not scared in the least by it. Both require honesty in order to have the mirror held up to them, but neither would find cause to stare back if the source was someone outside of their dysfunction. Because they are so alike in that respect, they automatically have a quality in common that becomes of great service to the plot’s desire to pair them, and they find a synergy that is pointed, intoxicating and sometimes rather hilarious.

The subplots and supporting characters populate the movie to bewildering proportions. The most important of these players are Pat’s parents, Dolores (Jacki Weaver) and Pat Sr. (Robert DeNiro), who take their son back into their home following his release. Dad is suspecting of his son’s unspoken intentions in the real world – we believe he is on to Pat’s scheme to win back his estranged wife, though does not intervene without proof – but Mom is caring and patient, and does not pass judgment on her son’s condition even when his manic fits escalate. She is already used to them; as the movie progresses, her husband’s obsession with the Philadelphia Eagles becomes more apparent beyond just normal sport fanaticism, playing right into an intricate climax where both of them must find peace with their illnesses just as the plot throws them into situations that might otherwise undermine their mental stability. The funniest scene in the whole movie is followed by the sweetest: Pat and Tiffany participate in a dance contest where their musical selections are nearly as bi-polar as they are, and their terrible scores are met with rousing cheers from family and friends. Cut to the next scene, and Pat finally comes face-to-face with the wife he has longed for, forcing his hand on a personal decision that is not exactly unconventional for screwball romantic comedies.

When it comes to perspective, “Silver Linings Playbook” comes close to recalling the spontaneous nature of the classic Doris Day/Rock Hudson romance comedies, where characters are clearly infatuated with one another but stumble quite embarrassingly through the uncertainty that comes with it. The only difference between them and the Lawrence/Cooper characters, perhaps, is a medical diagnosis. But all of the fundamental traits are there, right down to the embarrassing public displays and misunderstandings, and a chemistry that is both quirky and plausible. The formula has been universal for as long as there have been movie cameras, but now comes a context that speaks more to our sensibility as opposed to our idealistic desires. Pat and Tiffany co-exist in a world where unfortunate circumstances are absorbed through the lens of mental disorder, and as their opposing paths slowly become one, our optimism overtakes us. Few movies are this effective at generating such positive emotions from their audiences, and even fewer of them manage to do so without resorting to manipulation or preposterous circumstances for a payoff. By the end of the movie, not only was I satisfied by the outcome, but also completely persuaded by it.

Comedy/Drama (US); 2012; Rated R for language and some sexual content/nudity; Running Time: 122 Minutes

Having just seen this movie (3/15) with subtitles on Netflix, I see now why it got eight Oscar nominations. This review nails it and amplifies my understanding of why the movie is not just good, but great. All the way through I was thinking of the screwball romantic comedies of Hepburn and Grant. This review illuminates the psychology of the characters and ties that dysfunction into the scene layouts and dialogue with such precision as to merit required text in film writing and directing school.