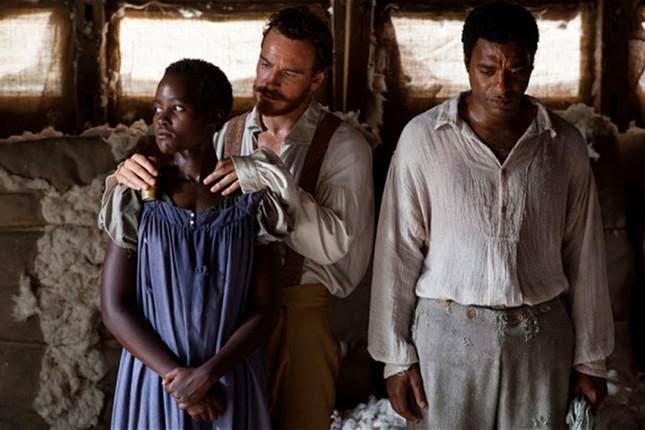 Steve McQueen’s stark, powerful “12 Years a Slave” leaps far beyond the notion of basic film composition and penetrates to the core of the human condition, at a time when the acts of a people left a stain on our civilization from which there could be no return. To see it – and indeed, to experience it – is to be part of one of the most haunting encounters we will ever have with a movie screen. Based on a prevailing memoir of one man’s perseverance during the years of American slavery, the film is the embodiment of historical resonance, and McQueen doesn’t so much direct a picture as he allows his mind to be a vessel for unflinching candor while a camera bears witness. Here is an endeavor so brutal, so honest and stirring, that it inspires a collective pause akin to what “Schindler’s List” did for the subject of the Holocaust.

There is a certain irony in the notion that this subject is just now beginning to be dealt with in the movies. Stories within the era of our civil war have inspired a handful of films both on the big screen and on television, but none (save for “Roots”) have confronted the material head on, or been so willing to discuss the events from a direct source. Does that suggest we are too ashamed to deal with the irrefutable suffering our ancestors caused to so many people during the 19th century? The words and memories of Solomon Northrup offer no clear answers, but exist to simply recall the details from an untainted perspective. His memoirs – and this movie, based entirely around them – are an act of truth staring deafeningly back at us, using eyes that are all-seeing and a voice that desires to just recall the way it was, and then leave us with our thoughts.

It all begins (as it usually does) with happier times. In the years preceding the outbreak of the Civil War, Solomon (Chiwetel Ejiofor) is a skilled violin player living a relatively comfortable life in Saratoga with a wife and children, seemingly un-phased by the colossal turmoil in the South. As one of a few “free” black men of his time and location, his knowledge of the world is limited to his own comfortable existence; even when a slave wanders past him on the street and gazes are exchanged, Solomon’s response is one of curious wonder rather than alarm or pity. Alas, after engaging in a night of festivities with a couple local white men hoping to acquire his violin talents in a travelling circus, he passes out in a drunken stupor and awakes to being chained in a dark cell, discovering that he has been sold off into the slave trade. Without his papers to prove his freedom, needless to say, he enters into a life that will inevitably alter the course of his own history.

That, in essence, is all that needs to be said of the plot, because “12 Years a Slave” is a movie entirely about experiences, not points in a story arc. As details transpire, ranging from ill-fated uprisings aboard transport ships to beatings and cruel encounters with slave traders (a scene between Solomon and a vicious antagonizer named Tibeats is particularly harsh), the movie steps beyond the notion of documentation and finds an emotional center of painful proportions. None, including me, are left untouched by what goes on in these 134 minutes of utter horror, all of which seem delivered as if its director were a conduit for the pain of actual eyewitnesses. Does he have an advantage in making a movie of this nature, much in the same way “Schindler’s List” benefitted from having Spielberg at the helm? There is no doubt. But there is more to establishing a mood of powerful connotations than just having the blood of the suffering coursing through one’s veins. McQueen’s virtue here is that he is audaciously dedicated to every frame of this story, and often refuses to pull a gaze away even when the material reaches a pitch of almost unwatchable terror.

As Solomon, the man whose predicament results in over a decade of suffering and cruelty (and time away from his loving family), Chiwetel Ejiofor is a revelation. There is scarcely a scene in the movie without almost sadistic oppression, complicating the degree of the performance; how in the world does an actor find the patience, or endurance, to be so fully immersed in an unglamorous embodiment without appearing rattled beyond recognition? The degree of his dedication is only amplified in co-stars. Later, after circumstances force Solomon to be sold to a neighboring slave trader, he has notable encounters with the slave Patsey (Lupita Nyong’o), the hardest working cotton picker on the plantation, who is also the prized possession of Edwin (Michael Fassbender), their obsessive and domineering owner. Fassbender risks much in his portrayal of the absolute epitome of American racism, and Nyong’o performance is so utterly heartbreaking that, when the movie requires her to submit to a seemingly endless whipping after speaking up against Edwin’s tyrannical diatribes, we are left paralyzed by her incomprehensible grief.

The movie’s underlying motivator is that Solomon must eventually reclaim his freedom; he has to, otherwise his own written records would never be passed down in our literary heritage for this film to be made. Freedom, no doubt, is a term relative to experience. After those 12-years of unending ordeals were over, did he ever really reclaim his sense of independence? His perspective? Did joy eventually replace any of the pain and suffering, however remote? History suggests neither; after being returned to his family in 1853 and penning these memoirs, he disappeared again four years later, reportedly dying somewhere undisclosed during the Civil war. The true tragedy, needless to say, is not just in what he went through, but in the notion that his pain was but a mere fraction of what went on in this country during the days of tolerated bigotry and bondage, when millions more submitted to similar cruelty. The virtue in Solomon’s case, at least, is that he was educated, and used it as an opportunity to pass down memories that might have otherwise been reduced to simple words in a history book without emotional context. Well over 150 years later, what we have now is a movie that connects with those moments like a powerless witness. “12 Years a Slave” isn’t simply an important movie, but a dose of brutal truth that must be confronted, and done so with absolute certainty.