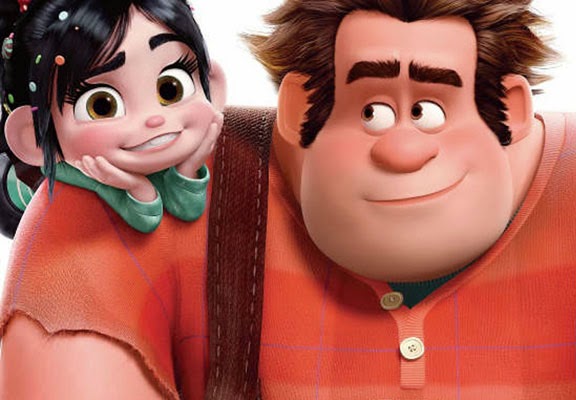 With a character like Ralph at the controls, the insight is unique. Day in and day out, he is used by his system – the oldest one in the arcade – as a mere tool of chaos in order to drive gamers on a charge for success. This in itself would not be such a demanding retread, perhaps, if not for the fact that the characters inside the games themselves buy into the realities of their programs. After all the arcade’s visitors have gone home for the night, in fact, the citizens of “Fix-It Felix, Jr.” partake in an uproarious celebration within the walls of their saved building while their overgrown adversary is cast off to the nearby dump – an obligatory action, we suspect, when you have a reputation of always being destructive. Fully aware of that narrow perspective and finding it unfair, Ralph often spends his evenings in a support group for other bad guys in video games, all of whom gather to vent about it all before reminding themselves that, yes, they must always accept the terms of the roles they have been assigned to. What a pain it must be to always be seen as the bad guy when you’re basically just a misunderstood social outcast. But what if one of them is inspired to break free from those chains? What effects would their actions cause? Would the programs crash? Would that threaten the existence of the more simple-minded characters? Would their rebellious nature create a ripple through the arcade, or worse yet inspire some kind of dangerous trend in others who too understand the feeling of being a virtual pariah?

“Wreck-it Ralph” is many things – exciting, colorful and often wildly imaginative – but not in my wildest dreams did I ever anticipate using the word “thoughtful” to describe a fairly recent animated film. To work with that frame of mind is to recall the chutzpah of the early Disney animators, many of whom saw their endeavors as part of an elaborate work of art well before the notion of a simple children’s cartoon. What nerve spoke to these filmmakers when they descended into this premise? What audacity did they have in looking at it all through such perceptive eyes? There is a trace of human observation working its way through this ambitious story at nearly every possible facet; adults, I suspect, will find themselves drawn to that quality long before they are seduced by the bright visuals. And yet that does not suggest that we are dealing with something unwisely serious in any context. Because the movie has such astounding fun with the interesting ideas it presents, there comes a moment when the adventure involves us so deeply that there is a cause to pause and marvel at the collective skill of the animators and writers. Their union has created one of the studio’s best endeavors of recent memory.

Most of that comes down to wise choices in writing the key characters. Ralph (voiced by John C. Reilly), who looks like a cross between an overgrown ogre and a rampaging monster with shaggy red hair (and immense forearms), is an ideal main character; he epitomizes the notion that looks can be deceiving. But contrary to his size – and his nature – here is a relatively nice guy who simply doesn’t understand the stigma that is attached to him. In essence, the “bad guy” label also casts him into unwilling isolation, and when he has the audacity to show up to one of the high-rise’s nightly parties, all of its residences shoot devastating glances of suspicion in his direction. Meanwhile, Ralph’s sense of insecurity is contrasted by the cheerfully vapid nature of the game’s hero, Fix-It Felix (John McBrayer); both of them understand the rules of their respective roles, but Felix is too simple-minded to comprehend anything beyond a restricted existence. That is a fact that seems to reflect the trend of most modern kid fables, in which heroes are often far less interesting than the conflicted villains.

The rules of arcade games require all of these figures to be present at the time of system use, but once the lights are out and the visitors have gone, they are free to roam between one another as if visiting strange countries. The movie visualizes this approach with often astounding results; a surge projector, for instance, is seen as a transportation hub that recalls the interiors of a vast train station, and the busy halls between power outlets are occupied by characters whose games have been unplugged due to system failure (but who were fortunate enough to escape before they were lost in computerized oblivion). The games themselves, meanwhile, vary between very primitive (“Fix-It Felix, Jr. is the oldest one in the arcade) to very advanced, and there is a scene when Ralph visits a bar that is immensely clever in how it recalls the choreography of pixelated figures on a gaming screen while showing us a more evolved interior. Would gamers have been so easy to dismiss older games if they knew how elaborate they looked from the inside?

Never mind. The conflict comes down to this unlikely hero possessing a basic yearning. Because Ralph is tired of his unending cycle and has lost sight of the rules, he is inspired to go in search of some kind of prestige in hopes that his peers will come to see him in a more flattering light. That chutzpah ultimately culminates in him stowing away in a new first-person shooter about alien insects, where he meets a headstrong (and sarcastic) commanding officer named Calhoun (Jane Lynch), and then flubs up something critical that causes him (and one of the aliens) to crash into another nearby game – a kids’ racing adventure made entirely of candy, no less. After observing that such a creature will likely overtake and contaminate any realm it inhabits, Calhoun goes in pursuit of this impending danger and along the way meets Felix, who has arrived in search of Ralph in hopes of persuading him back to his own home before the arcade owner unplugs it due to system glitches. Their interactions contain all the traditional undercurrents of an unlikely romance, but it is the camaraderie between Ralph and a newfound friend named Venellope (Sarah Silverman) that are the source for countless comedic moments. Inevitably the aspiring hero will learn traits of heroism through his interactions with her, and she in turn will learn how to trust others despite being an outcast in her own right: she is a system glitch that is forbidden from participating in an elaborate race of candy cars, even though she clearly has the skill for it. Were the filmmakers just being silly here in their visual conviction of colorful raceways, or do you think they were fans of “Speed Racer?”

Twists and turns dot the canvas like checkpoints in a cartoon formula, but the virtue of “Wreck-it Ralph” is that nearly all of them are delivered with unending enthusiasm in the material. The screenplay by Phil Johnston and Jennifer Lee has as much empathy and understanding for its key characters as the best of the Pixar writers, and just as they maintain a certain strategic detachment from their premise, they inspire us to think in deeper contexts. By definition, characters in a video game are often without intricacy or motivation; by supplying such qualities to Ralph and his likable cohorts, the movie creates entities that seem more tangible to us than many others in the recent times. An awareness of arcade games will no doubt add resonance to that notion, and when the movie actually takes the time to reference familiar faces – including Sonic the Hedgehog and Q-Bert – there is a sense that everyone involved has not only done their homework, but gone the extra step to link it to our own technological heritage.

Will kids understand the references or appreciate the tongue-in-cheek subtlety of these ideas? It’s doubtful. But they have their own adventures to contend with here, and the movie wraps them in a display of such vivid color and imagination that they all work amazingly well on their own levels, even apart from the adult insights. Reflecting the values of the best Disney films, “Wreck-it Ralph” is a movie made in that very narrow outlook that creates a universal appeal. It has something amusing to say to just about everyone. And when it comes to that small sect of viewers who prefer to identify with the human awareness of figures on a movie screen, an ambitious endeavor like this will only cement the notion that, even after all this time, animation still possesses the ability to speak so many different narrative languages.