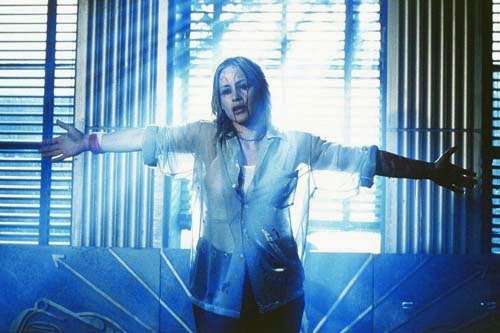 First up is "Stir Of Echoes," a story of ghouls and ghosts that is being compared to the critically-raved "The Sixth Sense." In the film is the account of Tom, played by Kevin Bacon, a seemingly normal husband who has a son, a caring wife, and another kid on the way. Tom doesn’t believe in anything supernatural, which may be why he takes a risk of being hypnotized by his own sister-in-law. Alas, in his hypnotic state, something becomes triggered in his mind to permit him to see things no one else can. There is a ghost who roams around their neighborhood. And it’s not just any ghost either—she is the spirit of a girl who lived and died in that neighborhood. Tom suspects foul play in her death through various clues given off by her spirit, and thus vows to solve her crime—even if it kills him. To top it all off, his own kid sees the ghost, too, making for an interesting premise with a slight “Sixth Sense” twist to it.

Harvey Karten, fellow film critic who is sure that this year’s movies have been (so far) unscary, calls it "the first scary movie of the year." His words are also felt by other critics, such as Craig Roush and Prairie Miller, who give the film high marks for more reasons than one. In his own review, Roush writes that "the story is planned intelligently and given a very real atmosphere to run in. These are only some of the key factors which make this thriller a success, and as far as ghost stories go, there's not much better to be found." At a time when "The Sixth Sense," a vastly overrated supernatural ghost story, is keeping the #1 spot at the box office, expect this little film to give it significant competition.

"Stigmata," a movie that has been dubbed the "Neo-Exorcist" by movie historian Leonard Maltin, is just as anticipated. Instead of ghosts haunting people with gifts, however, what we have here is a story directed at the ol’ Catholic Church--a religious tale about the legendary account of the stigmata, which, as detailed by religious experts, is when one is attacked in the form of Christ’s crucifixion. The story depicts an ordinary hairdresser (Rosanna Arquette) in a world where she doesn’t know what is going on, or why it is happening. Strange attacks happen. No one is there. The church suspects it has something to do with an evil entity, and they send a priest to check it out. What he finds, however, is something more frightening than he could have ever foreseen.

Story sound familiar? If you’ve seen "The Exorcist," then the answer is likely yes. But what separates these two similar tales about supernatural possession is the perspective they are each told in. "The Exorcist" was a movie told from an onlooker’s point of view. "Stigmata" is the hairdresser, Frankie’s, story. We are to experience things as she experiences them. We are to feel things as she feels them. Because of it’s moderate difference, the film should not be compared to "The Exorcist" in any way, although we should not doubt to hear William Friedkin’s film mentioned in reviews this Friday.

Director Rupert Wainwright, who is a relatively new face in filmmaking, has made all the stops necessary in making this film look and feel genuinely scary. Everything from the atmosphere to the cinematography to the makeup is detailed in dark tones (referred to as "skip bleaching"), underscoring the evil manifestations that surround Frankie’s life. Most of us have only seen the trailer in theaters, but even in that footage there is scares galore. Expect "Stigmata" to stun audiences, along with "Stir Of Echoes," this opening weekend.

How can we be sure that either of these movies will succeed? Simple: supernatural thrillers have gotten their edge back. For the past few years, we’ve witnessed an unbearable amount of the same old things, like slasher movies, horror satires, and Kevin Williamson failures. But since the recent surprise success of "The Blair Witch Project," things are beginning to get scary and believable again, turning up in other films such as "The Sixth Sense," and even "The Haunting," which got bad reviews, but managed to pull in over 30 million in opening weekend alone. Millennium fever may be the cause.