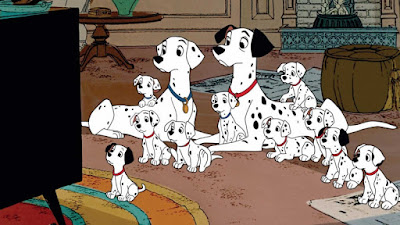 A lot of the postwar Disney cartoons flourished from the same prospects, and by the time "101 Dalmatians" came and went those ideas had completely consumed the field. Of course, Disney died relatively early in this transition, but his legacy seemed deafened by the eagerness of clumsy storytellers. The animation department experimented for the next few years, starting with "The Aristocats" and eventually ending with what is generally considered the rebirth of animation, "The Little Mermaid" (although 1985's "The Black Cauldron" was an underrated example of the studio’s great enthusiasm for new ideas). In between were projects of poor quality and often ludicrous payoffs. Each succeeded in their own ways, yes, but none approached the magic of earlier Disney days. "101 Dalmatians," released in 1961, was the first to suggest the new direction, and, by comparison, it is uneven, disappointing and lacking in artistic merit. But despite flaws, we have constant admiration for the insanely-written plot, which sets us up on a tour with 101 dogs as they make their way through cities and snow-covered landscapes to get away from their enemy, a woman named Cruella De Ville who desires to make them into skin fur coats.

The story is already familiar with animation buffs. It tells the story of Pongo and his "pet" Roger, two bachelors who, at first glance, are happy with their lifestyle. But the Dalmatian describes his life as "downright dull," and is determined to find mates for both he and his owner. In one of the film's most successful scenes, Pongo sits at a window and examines the pairing of women/dogs, and whether or not they qualify as successful mates for both he and his pet (naturally, he makes up his mind simply by the dog's appearance). At least, with this peculiar story, Pongo is willing to admit that dogs are a poor judge of human beauty.

After a few pairs pass, he finds what he is looking for. Now the difficulty comes into play – how does Pongo bring both couples together? Simple: Roger takes his pet for walks after five. If Pongo manages to set the clock ahead of time, he and Roger may very well pass the females in the park. The story takes chances, and always gets away with them – a necessity if we are to believe that 101 dalmatians can have an adventure with no one getting lost, I guess.

All of these coincidences and unbelievable animal characteristics might have failed if it weren't for the presence of a challenging villain working against them. Cartoons of the past guarantee admiration if they are able to attract a ruthless but well-animated villain to the viewer. De Ville, one of the few scoundrels to actually be female, is perhaps one of the strongest; her style as woman in love with animal fur coats inflames us with droves of dislike, all while coming off as shrewd and charismatic. Yet she also generates a sense of admiration, as mishaps prevail over her diabolical plans, and she loses sanity when the dogs outwit her. The pairing of Jasper and Horace, the two hired bandits working for her, is key to the danger as well.

The animation certainly doesn't score points. Being the first of the animated vault to use a process called "Xerox animation" – in which animators could cut corners and copy images instead of redrawing them – the film repeats action in extreme ways. The 101 Dalmatians themselves have a limited dimensional quality to them as they scurry through halls and down hills, and the backgrounds are filled with hard edges. The animators might have resorted to this because their previous production, the lavish "Sleeping Beauty," was budgeted at $6 million, and it failed to turn up profit. This new process enabled animators to get movies out faster, but in the process, decent stories were accompanied by one-note styles. Compared to the early days, in which characters and scenarios were hand-crafted, these films felt second-rate as works of art.

One wonders if there is still a market for this sort of endeavor now. After two VHS editions, not to mention countless theatrical re-releases, the Disney cartoon that attracted so many die-hard animation fans long ago has apparently gained more popularity than it perhaps deserves. Even though it clearly doesn't deserve the attention of the cartoon classics, we understand why this is the case – because the story's absurdity and over-the-top quality have a soggy charm, and the characters (with the exception of the dogs) are written with unique personalities. This isn't one of those Disney masterpieces like "Fantasia" or "Bambi," but it is an entertaining, observant film with enough credit to its name to be considered recommendable.

Produced by Walt Disney; Directed by Clyde Geronimi, Hamilton S. Luske and Wolfgang Reitherman; screenwritten by Bill Peet; based on the novel by Dodie Smith