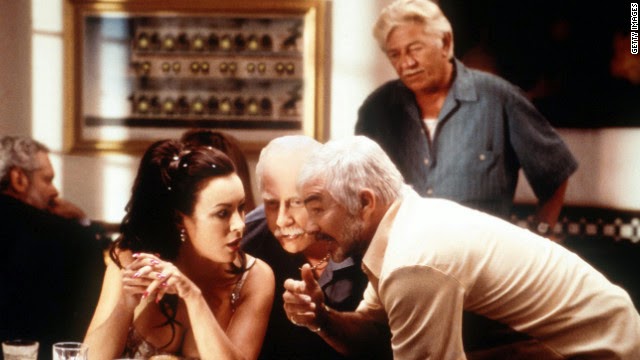 At the center of this banal premise are four main characters: Joey “Bats” Pistella (Burt Reynolds), Mike “The Brick” Donatelli (Dan Hedaya), Tony “Mouth” Donato (Seymour Cassel), and Bobby Bartellemeo (Richard Dreyfuss), whose missing nickname inspires one of the many dry gags used in the script. The four oldsters, who just happen to be ex-mobsters living in the same retirement home (no coincidence intended, I’m sure), enjoy the seemingly simple life in their run-down community until a proposal for expansion and remodeling is brought forth in the plot. Unwilling to part with the current state of their lives, the four men scheme to lay a corpse out in the hall and make it look as if he were murdered there, thus forcing the property value to plummet. Unfortunately, the body they have acquired is the presumed-missing father of an in-town mobster, who now thinks the four men are responsible for daddy’s death.

The story doesn’t end there, but rather, chooses to venture into so many new directions that we give up hope of gaining a the slightest interest. Two major subplots emerge alongside the core story, one involving the kidnapping of a woman and another having a police officer learn that one of the geezers she’s investigating is actually her father. If that isn’t enough, the movie manages to squeeze all of this (and more) in at less than 90 minutes, moving so fast at points that there’s no opportunity to develop a simple fixation on the story or its characters. And since the humor level doesn’t even reach ground zero, this makes the experience much more dreary and irritating.

Barry Fanaro’s story is so obviously conniving and wretched that, if movies were human beings and critics were their criminal judges, most of us would opt to send it to death row. There is not one moment of mild merit here: no wit, no creativity, no inspiration, and no apparent desire to even attempt these attributes. After about a half hour during the movie’s run, I eventually found myself comparing this rendition to the events following an overturned oil rig—you know, the kind of disaster that could be prevented, but once it’s done, everyone involved would rather watch the flames instead of put out the fire. “The Crew” certainly had an opportunity to prevent an inept outcome, and mercy knows it could have even redeemed itself with some kind of plausible humor even in the midst of the crummy story, but alas, neither of these scenarios matter to anyone on and off screen. All that the filmmakers seem to care about is watching the four actors move around each other and hope that their experience will give the dialogue and story an ounce of credibility. Too bad the actors don’t care, either.

“Space Cowboys” wasn’t exactly a great film to begin with, but it had the kind of spirit and energy that glittered all of the efforts. My advice is to stick with that film if you’re looking to pass the time with four aging actors. “The Crew” is, without a doubt, a deflated rip-off and should be avoided like a Mariah Carey CD.