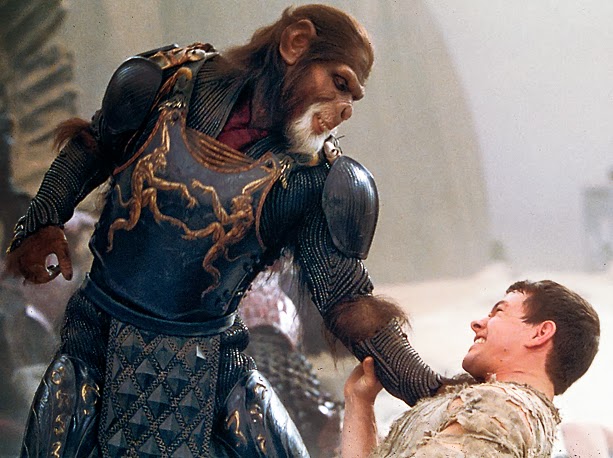 In terms of imagination, the source material is some of the best science fiction we will ever come in contact with. Millions of then-avid fans will probably always remember the good ol’ days when a movie starring Charleton Heston and an ensemble cast made primarily up of actors underneath makeup that transformed them into apes was playing at the local multiplex They may also recall, if highly devoted, that the picture in question came with four sequels soon after, all very successful but not quite as satisfying. Those were the days when the idea that mankind’s ancestors in evolution could rule a planet as the dominant species was still a novelty in the minds of movie fans. But at this point in time, the answers are clear and need no further investigations, which is where this remake makes its first (and most damaging) mistake.

Oh, but Burton’s “Apes” is not so much a “remake” as it is a “re-imagining” of the classic sci-fi opera. The plot has drastic differences from its predecessor, many character changes, and an ending that features little similarity to that infamous last shot of Mr. Heston “damning” the apes at the wreckage site of the Statue of Liberty, yet delivers the same kind of jolt. Burton assures his viewers that this all is simply the way he perceives the novel by Pierre Boulle, but who cares anymore? Don’t we have better things to do than rehash something that was so magnificently played out the first time around? Lightning doesn’t strike twice in the same place, you know.

In this “re-imagining,” we meet a US Air Force astronaut named Leo (played by Mark Wahlberg, making this perhaps the actor’s most unflattering movie role ever) a fan of chimpanzees who, during a rescue mission, is sucked through some kind of vortex (I guess) that eventually dispatches him and his transportation vessel down into the atmosphere of a relatively unknown planet steeped in morass-like vegetation. He’s marveled at the sight, and is even more intrigued when he finds out humans inhabit the area around his crash site. Unfortunately for him, as he soon finds out, a higher power than his own kind rules this planet and is enslaving humanity with an extremely tight grip. In simpler terms, standard summer plot.

But we mustn't ignore the fact that, despite a lack of excitement, there are some noteworthy things about Burton’s version of this story. The most notable aspect of the picture is its look—the sets are curiously dynamic, the costumes complex yet bizarre, and the makeup endlessly astonishing (for the obvious reasons seen in many TV spots). Though much of the movie is action-oriented, the cinematography is always on-target, and Danny Elfman’s score is so well done that it could lead to an Oscar nod next February.

These slight touches of gold, however, only act as temporary distractions from the endless slew of problems with the film, which start showing up just shortly after the movie begins. The script by William Broyles Jr. provides the biggest obstacle for Burton, because the material he is dealing with lacks that post-apocalyptic, foreboding element that not only worked for the original movie, but for most of his own films as well. In addition, the majority of the movie’s characters are uninteresting and distant. Michael Clarke Duncan, though transformed magnificently into an ape, is one-sided and dull as the towering Colonel Attar, as is Tim Roth as the ruthless General Thade. Heck, even Mark Wahlberg as a human trying to lift slavery of mankind can be seen as dead weight here. Only Helena Bonham as the human rights activist Aru stands out from her cast mates, but only because she looks more like a cuddly stuffed animal than an actual ape.

And how about the movie’s ending? Oh boy. Mr. Burton himself expressed great enthusiasm for this portion of the project after it was finished, wondering what kind of response the audience would give after seeing the obligatory cliffhanger it offers. But this ending isn’t the great resolution found in the original film, and it leaves us with agonizing questions rather than sensible answers (other than that it might lead to some sequels).

“Planet of the Apes” was reportedly classified under development for a good seven years, switching directors and screenwriters and actors so often that the studio undoubtedly felt like it was playing a game of musical chairs. Names like Oliver Stone and James Cameron were originally reported, with stars such as Arnold Schwarzenegger rumored to be signed on to the project. Given that kind of status, perhaps that’s why the movie feels like such a mess. But coming from Tim Burton, a man who made “Sleepy Hollow,” “The Nightmare Before Christmas” and “Ed Wood” with only a couple of years dividing them, this is somewhat of a surprise. You’d think that a man with that amount of talent would be able to put together a mildly plausible rendition of this kind of story, albeit a doomed one. But that doesn’t happen here. “Planet of the Apes” is the poster child for a long, tedious summer of movies that often lacked inspiration and thrills.