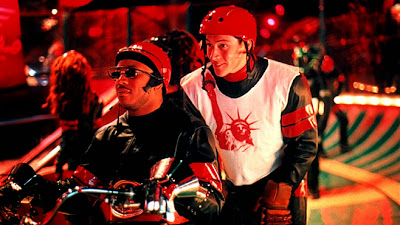 Alas, no amount of warning could have prepared us for "Rollerball," a film that opens with a hectic racing scene down the busy stretches of San Fransisco highway and then immediately continues its descent into an atmosphere of crummy storytelling, pathetic acting, childish directing and utterly catastrophic film editing. Yet such significant distinctions barely scrape the surface of experiencing the picture firsthand, which isn't just incompetent and sloppy, but without a doubt the single most atrocious and disgraceful major studio release of the new millennium. Given a climate that is already plagued by the likes of "Battlefield Earth," "Next Friday," "Bubble Boy" and "The Skulls," this is no small accomplishment, either. The movie is worthless, pointless, joyless garbage, and it's a wonder that anyone lucid could have possibly approved the project to begin with, much less release it in this sort of condition.

The year is 2005, and the popularity of extreme sports has virtually become a worldwide sensation. Smooth-talking extreme athlete Marcus Ridley (LL Cool J) teases his best bud Jonathan Cross (Chris Klein) with promises of great thrills from the adrenaline-rushing, bloodcurdling challenge that lies in rollerball, a sport that has originated in Asia and combines elements of roller derby, motorcycle racing, polo and even football on a court that looks like a champion skateboarder's biggest dream.

Because Jonathan's career with the NHL is on ice, he and Marcus jump at the opportunity set out before them and travel halfway around the world to the center of this violence-infested atmosphere. There, they join the team of the creepy ringleader Alexi Petrovich (Jean Reno) while Jonathan himself becomes quickly fascinated by the talented and beautiful Aurora (Rebecca Romijn-Stamos), a teammate who gladly returns the flirtatious behavior. But not all is right in extreme sports land; as Jonathan's knowledge of the game progresses and he garners a fan base, the game suddenly becomes increasingly violent, resulting in injuries (and in some cases, nearly-fatal accidents) that shock the audience, but result in increasing worldwide exposure. Of course, this is all part of Petrovich's master plan to have his sport broadcast across major airwaves, but unless Jonathan, Marcus and Aurora can unravel the sinister plot, they may wind up as the next casualties.

If any of this sounds familiar, that's because "Rollerball" is actually a loose remake of a 1975 film starring James Caan, with the same title, about a futuristic society obsessed over physically brutal and unrewarding sports. That movie was no marvelous achievement to begin with, but the decision to remake it at least (at the time) represented ideal instincts: if you want to redo a movie, target one that you can make improvements on. However, those plans didn't exactly go smoothly when a final cut of the film was screened for text audiences earlier last year, resulting in word-of-mouth that described the result as not simply lousy, but disastrous. The movie studio ordered reshooting and cutting as a result of the overwhelming negative feedback (something, ironically, that McTiernan has grown accustomed to ever since his "The 13th Warrior" endured a similar fate a few years back).

The current version of the film has been hacked from a firm R rating to a mild PG-13, and there are large scars to prove it (in fact, it's not much of an overstatement to say that this picture features the single worst film editing job in cinematic history, finally ridding "Armageddon" of that dubious honor). The movie's actions scenes contain not one single frame of stability or clarity; few stay on screen for more than a brief second, as if they were part of a child's flip book, disappearing before we are even aware of what is happening. The material containing nudity and sexual romps, meanwhile, represents some of the most clumsy and incompetent decision-making seen since "Supernova," where sex scenes were dissected so that only above-waist physical action could be seen in order to maintain a PG-13 rating. There are instances when we see Romijn-Stamos and Klein attempting to engage in rough intercourse, but just as they begin to do the deed, the camera cuts to the next scene and pretends it never happens. What's the point of even including this stuff? Why not just remove it completely? With fragments like this, "Rollerball" comes off as not simply lousy, but amateurish, disconnected, pointless and void of any shred of logic or reasoning. Of course, any movie that has the nerve to include a lengthy chase scene shot completely in badly-detailed night vision for no apparent reason doesn't exactly have much concern for doing things the right way to begin with.

McTiernan and his studio have stooped to unprecedented lows by releasing a major action film in this condition. But the more important question is, why did they release it anyway? Haven't they ever heard of a burn pile? And isn't it about time that we were spared the mere existence of these lost causes? Consider one of the remarks made by a television announcer during one of the films key scenes: as motors rage, crowds shout and testosterone is driven to an all-time high, he announces "It's about to get interesting!" Much later, we realize that probably no one ever taught him that he shouldn't make promises he can't keep.