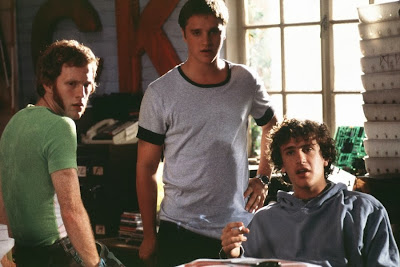 The film stars Devon Sawa, Michael Maronna and Jason Segel as college roommates in the fictionalized establishment of Holden University, where the three men, as odd as it may seem, are getting very respectable grades via their scheming and cheating ways. Their efforts, however, are balked when the campus nerd Ethan (Jason Schwartzman) catches them in the act on an important test. Of course, he's willing to keep silent on the discovery, but only as long as the three dimwitted boys set him up with the campus catch, the beautiful Angela (James King) whom Ethan has become obsessed with. Going along with the scheme to ensure their safety as future college graduates, however, Sawa's character Dave quickly earns the admiration of the woman he's trying to set up, not the nerd who should be the recipient of all the deceiving.

Speaking of deceiving, who could have ever imagined that so many likable actors could be trapped in so many detestable roles in the same movie? Devon Sawa and James King, for instance, are tolerable and competent screen actors (King actually came off believable in last May's misfire "Pearl Harbor"), but here they step into parts that are completely wooden and lackluster. To an extent, even Jason Schwartzman, who was in the painfully overrated "Rushmore" a few years back, can be an amusing performer. But his character of Ethan in "Slackers" does nothing but enforce the negative stereotype of the movie nerd. Not only does this guy lack respectable social skills, but he's also a downright annoying and pathetic worm of a human being, whose obsession with Angela runs too deep to even be considered a mild little crush. Little can be said for Segel and Maronna, meanwhile, who come off as basic idiots simply because that's what most teen comedies contain.

This is all supposed to lead somewhere, I gather, but results are the farthest thing from the minds of those associated with "Slackers." This is one of those pictures where the story acts merely as a vessel to carry out all the half-baked and tone-deaf gags, where the punch line (if there actually is one) has little to do with the actual plot other than to prevent audiences from popping off out of sheer boredom. The resulting jokes take no prisoners as far as taste is concerned, and they include a scene of clear masturbation, the use of a penis sock puppet, and even a bare-breasted 80-year-old woman who enjoys sponge baths (not surprisingly, the MPAA considers all of this R-rated material, further indicating that they may be suffering from a case of temporary insanity). But one characteristic separates this endeavor from most decent bad taste comedies: none of this stuff ever comes across as funny. Never. We stare, we frown, and occasionally our eyes widen from utter jolt. But that's all. The movie is void of spirit and energy beyond the use of pointless shock value. The title is well deserved, because it not only represents the effort of those who made it, but the effort that is required of moviegoers to endure it.