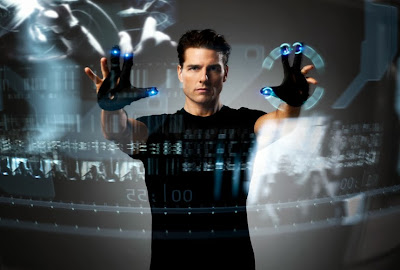 Forgive me if this makes the movie sound a lot worse than it actually is, because once this rather diminutive detail is stripped away from the result, "Minority Report" is quite an extraordinary experience. Even more of an achievement than his highly stylized efforts with "A.I.", Spielberg's latest undertaking is a swift, intelligent, relentless, creative, and compelling outing down to the very finest details. The premise is based primarily on a famous short story by Philip K. Dick, who inspired the stories for "Blade Runner" and "Total Recall," and in that regard the movie has the genuine psychological depth and irony seen in those past endeavors. But this isn't simply a futuristic tale with neat little gadgets and gizmos stood up against a penetrating narrative. Spielberg's vision brings a frightening and seemingly outreached realism to his subject matter, pulverizing boundaries between life and illusion so expertly that even potentially ridiculous visual gimmicks, such as scurrying mechanical spiders, come off as authentic.

The short story itself is enough to justify the production of dozens of films. In the story, set in Washington D.C. some odd years into the near future, the United States government has reached a pinnacle breakthrough in crime-fighting. Thanks to a technological breakthrough established a few short years before, the law is now able to predict and arrest potential killers before they actually commit the proposed crimes against others, thus eliminating a high fatality rate in homicide cases and restructuring the shape of society as we know it. This innovative Pre-Crime unit, which is on its way to being taken nationwide, is composed of three psychic beings dubbed the Pre-Cogs, who are contained in liquid and hooked up to machines in true science fiction fashion. This project, furthermore, is headed by the wise but charismatic John Anderton (Tom Cruise), a detective whose personal tragedies have fueled his desires in this line of work. The highly-publicized tactic, alas, is called into question by hotshot Detective Ed Witwer (Colin Farrell), who not only argues that the system may suffer from human error, but also wonders if the government has any right to imprison someone who never actually is able to commit murder. Anderton's faith in the system retorts most of those suspicions, and at one point he announces, "just because you stop a murder from happening doesn't change the fact that it was still going to happen."

Faith in the Pre-Crime unit, as expected, is weakened when Anderton himself is fingered as a future murder suspect, a result that has the quick-witted detective himself baffled beyond reasoning or explanation. As he goes on the run from those who he has worked closely with over the past couple of years, the object of the game becomes not about whether the program is faulted or not, but whether he is truly guilty and if there is something else going on in the department that he isn't completely aware of. The minority report that is referred to in the title of the film itself is a crucial piece of data that John sets his sights on, a tidbit of well-hidden information stored somewhere in the Pre-Cogs that indicates one vision is slightly different from the ones that the other two psychics endure during the process. Dr. Iris, the original designer of this complex psychic system, appropriately drops a clue early on in the film to this premonition when she blurbs, "the Pre-Cogs are never wrong; but they don't always agree with one another."

The screenplay by Scott Frank and Jon Cohen is a sea of fresh ideas and approaches, expertly crafted not just to keep the audience engaged, but to nourish their senses in the process. The fundamentals of Dick's mesmerizing short story are likewise matched with elaborate and believable plot setups, which build to pulse-pounding heights at some points (as when Anderton resorts to having his eyes changed by a former adversary to prevent identification to authorities) and then sink into pleasing subtlety at others (such as a scene in which Agatha, the center of the Pre-Cog unit, reflects on what life would have been like had Anderton not lost his only young son). Though the story is always busy hurrying around for the next necessary device, it's worth noting that the pacing is rock-solid, especially considering that the picture's 140-minute running time could induce cringes in anyone who recently had to endure the endless shenanigans of the latest "Star Wars" flick.

With a strong story operating as the firm center of "Minority Report," Spielberg and his cast and crew garnish the product in several other ways. Aside from containing visionary (and believable) special effects, the movie is also the product of breathtaking cinematography, which sweeps us into this futuristic epic as if we are standing right alongside the characters who experience the action. There is one shot in the later half of the film, in fact, that may even be the finest ever seen in a Spielberg film, in which Samantha Morton's Agatha and Cruise's Anderton are effectively framed in opposite directions, their faces emotional and vulnerable as they attempt to grasp an understanding of the turmoil they've been pitted up against up to that one point.

Furthermore, the performances conveyed in the film's most crucial players are compelling, rich, and at some intervals, even heartbreaking. Morton as the terrified Agatha, a Pre-Cog who lives every moment seeing tragedies of the future, is the movie's emotional core, and when she asks in a trembled voice, "is this now?", we know exactly what she feels. Cruise, whose career has been on an upswing over the past few years, is just as convincing and appropriate here as he has been with his other recent roles, and Colin Farrell, who was a revelation in Joel Schumacher's "Tigerland," is fantastic as a shady detective whose intentions may or may not lead him to cunning manipulation. Comb these performers in with the likes of Max Von Sydow and Steve Harris, and what you have is an ensemble seeped in effectiveness.

The greatest science fiction films were never those that suspended all the rules in exchange for far-out special effect creations or landscapes, but those that balanced the essence of reality with elements of the conceptual and bizarre. "Minority Report" strikes that chord right from the beginning and never once lifts from it. Sadly, the one rule it manages to sideline is the one that could have sealed the package with firm classic quality. As it stands, the movie is a truly unforgettable piece of magic. But in its attempt to earn the distinction of being a true masterpiece, it fails, although only by a mere hair.