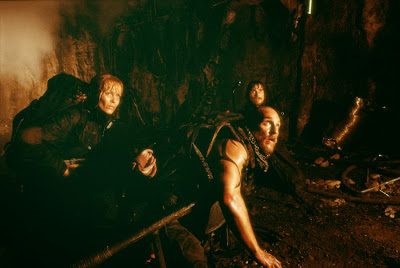 The movie opens with a brief but effective prologue to the nightmarish events that follow. In present-day London, a curious and ambitious British 12-year-old named Quinn descends deeply into an underground dig site, where his mother is assisting some new subway project. When one of the drills penetrates a cavern deep within the chasm, it unleashes a creature so ancient and rare that history has only written about as myth up to this time. In the wake of its fiery awakening and escape from the cave, it destroys everything that stands in its path... except for Quinn, who becomes the soul surviving witness to this event.

20-something years after this awakening, mankind has fallen mightily to the fire-breathing dominance of the dragon, a species that in just a short time has reproduced enough spawn to reclaim Earth as its own. Quinn (Christian Bale) is now an older, wiser and cautious man, surviving in seclusion with a team of nomads that attempt to retain a respectable lifestyle despite their resulting limitations. In his experienced eyes, what is left of humanity is to be cherished and protected no matter what the consequences; retaliating against the deadly enemy would essentially be suicide.

Enter the persona of Denton Van Zan (Matthew McConaughey), a self-proclaimed American hero who, along with an establishment of buff and foreboding renegades from the Midwest, invade Quinn's establishment with seemingly false hopes of reclaiming the distinction of being Earth's dominant species. Quinn, naturally, is unconvinced by the bloated ramblings of an egotistical and eccentric war machine, but when Van Zan and his fleet are able to take down a dragon with calculated ease for everyone to see, the possibility is called into question.

Van Zan's solution, as it comes to light, is actually a rather simple one: all they need to do is kill the source of the relentless spawning of new fire-breathers, which in this case, as it is with fish, is the male. As a result of this undertaking, the species will eventually die off. Simplicity in this situation, however, doesn't make up for its implausibility--just how is this band of unlikely heroes expected to take down a particular beast that apparently no government was smart enough to? Just how do they know the only male can be found in their vicinity? And what exactly motivates them to believe that every problem is solved simply by the slaughter of one male dragon (which may not even be the only one)? The movie never sees the need to explain any of this to the audience.

As a star vehicle, both Bale and McConaughey take the lion's share of substance out of the screenplay, which is heavily character-driven instead of being complete eye candy. Bale is fairly tolerable as a cautious and caring survivor, but McConaughey is over-the-top as the smarmy Van Zan, a man who grinds his teeth, rebels against any opposition and is disgusted when people celebrate the death of one single dragon, especially when it cost his team some of its own casualties. Luckily, Izabella Scorupco as Alex, Van Zan's most trusted teammate, helps soften the ridges that is built around the male figures of the picture.

In terms of style, "Reign of Fire" borrows the majority of its flair from the likes of "Mad Max" and "Waterworld," dressing characters is dark and scathed costumes while stationing them on desolate landscapes. The major discontent with this endeavor, alas, is how muddy and indistinctive the visuals are compared to other apocalyptic tales; when we aren't being enticed with the dragons themselves (who appear quickly and distantly most of the time), we're being thrown into murky shots with lots of smoke, fire, shadows and fog that do nothing to spur the eye's interest. In fact, it's rather frustrating watching most of this unfold; you feel detached and abandoned by the imagery, which lacks identity and is almost shoddy enough to be compared to standard computer game graphics.

There is, thankfully, some merit to speak of here. Aside from the initial foundation of the movie (which could easily be made into countless worthwhile action films), the screenplay does a fairly good job with linking this fantasy with reality, especially during scenes such as the one when Quinn acts out a climactic scene from "The Empire Strikes Back" in front of little kids who have no knowledge of the newly-distant "Star Wars" phenomenon. Furthermore, the movie doesn't try to take itself too seriously, often resorting to slight humor as a gimmick to help relieve tension in the atmosphere. Brief strokes of luck like this, sadly, are sidelined by a story and pace that are uninterested in delivering a satisfying conclusion. Perhaps the idea of putting dragons into a summer action movie was all that the filmmakers had on their mind.