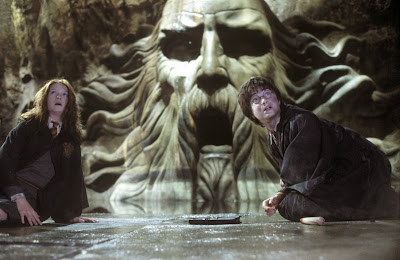 That chord of quintessential delivery is fundamental to some of the most classic children's literature of our era, as demonstrated by the likes of "The Wizard of Oz," "Charlie and the Chocolate Factory," and even "Alice in Wonderland." And when I refer to the children, I don't mean for the bracket to fall on ages between 5 and 10; like "Harry Potter," the more familiar fables for youth are actually those pitched to kids who are significantly older, if only because they utilize traits sometimes too dark or foreboding for some ages to handle. Parents should be strongly advised to consider that sentiment when it comes to "Harry Potter and the Chamber of Secrets," the second screen adaptation of the famous J.K. Rowling stories, which isn't just darker than its very successful predecessor, but also rather serious and fierce.

I must confess, however, that I'm not exactly one of Mr. Potter's biggest fans; in fact, I've never even read the books that these movies are based on, though several colleagues have insisted I do so (and though I'm hesitant about the demand, be sure that this story, at least, is farther ahead on my list than "Tuck Everlasting"). That hesitation, needless to say, stems partly (but not entirely) from my initial response to the first film in the series, which I found invigorating and creative on a technical level, but severely lackluster as a narrative. "The Chamber of Secrets" makes a courageous attempt to resolve most of those issues, and though the undertaking is slightly more engaging and plausible then the last, it still feels like it is holding back on something far too crucial or relevant to be ignored.

Like its predecessor, the movie is about kids, extraordinary and unique boys and girls who are summoned from every face of the globe to take part in the wondrous (and sometimes rigorous) exercise of education in all things witchcraft and wizardry. On an annual basis, these bright and talented little players are sent off into a strategically hidden magic realm to further their studies at the gigantic Hogwarts Academy, which is hidden deeply but safely in the mountainous countryside like a boarding school for students who need to be disconnected from the outside world. Though it isn't your typical schooling environment, the essence is the same: students are divided into "houses" upon arrival, reside in dormitories, are subject to a variety of school subjects and lectures, break many of the rules, and even participate in extracurricular activities. While some students are being tutored on the dangerous task of transplanting Mandrake plants from one pot the next, others are being subject to the halfhearted lessons of the school's newest professor, the stuck-up blowhard Gilderoy Lockhart, who gladly abandons his class in a room with dozens of escaped blue pixies and hopes that they will know the right spells to successfully recapture them.

As before, the movie's focus is not just on Harry Potter himself (played once again by Daniel Radcliffe), the well-documented sole survivor of a powerful wizard's wrath of fury, but also other young and aspiring students as well. There's Ron Weasley (Rupert Grint), one of four aspiring wizards in a family whose own clumsiness and naivety makes him the target of many a joke, and Hermione Granger (Emma Watson), an intellectual and charming girl who often arrives at conclusions even when Potter himself doesn't know the answers. Together, these three form the spinal column of the story, as they slowly begin to suspect something amiss about their environment just when their elders begin to creep dangerously closer to the edge of panic. They know nothing concrete about what is causing this gradual threat against the academy's survival, but whatever it is, they suspect that a notorious school legend regarding the "chamber of secrets" has something to do with it.

Newbies to the experience of the "Harry Potter" legacy will make instant notation of how clever the story can be with labeling and representing its numerous side details. There is, for instance, the Quidditch game, a sport that combines elements of rugby, soccer and hockey while wizards are suspended in midair by their brooms. But characters aren't simply taught exercises or lessons here; they live the material through the use of distinctive mindsets, sometimes having adventures or asking questions along the way that don't go by anyone else's standards. Through an exciting lesson on protection spells, for example, Potter discovers that he is what other wizards call a "parcel tongue," someone who has the rare ability of talking to snakes through the use of an ancient language that no modern textbook could successfully describe. Potter never quite realizes the capability even when he is made aware of his power; instead, he questions his own relevance as a student at Hogwarts, and whether he is being clumped into the right academy house considering his "gift."

Though the academy itself at the center of the "Harry Potter" stories is easily one of the most elaborate and memorable sets in modern moviemaking (what else can be said about an infrastructure with rotating staircases, hidden bathroom chambers, coexisting ghost entities and animated wall portraits?), other traits of these films have not been as rewarding. Consider the Dobby character in "The Chamber of Secrets," if you will, a digital creature who spends the majority of the film as Potter's noisy reminder that he shouldn't be anywhere near the school this year. In a twisted and eccentric way, he looks like an anorexic version of Yoda and talks like Jar Jar Binks on steroids. Director Chris Columbus seems to be aiming for a goal with this special effects creation—perhaps to enlighten the sometimes-depressing mood of the story—but the attempts are not only unsuccessful, but rather unattractive as well. Not once do we feel even the slightest admiration for his noisy and obnoxious ways; in fact, when he makes it a habit of slamming his head on objects as personal punishment, we actually hope he falls unconscious as a result and spends the rest of the movie in a coma.

If that isn't enough to tip the scales, then look no further than the movie's last act, an hour of consistent nothingness decorated by visuals so elaborately grim that they almost scream out in frustration. As expected, Harry, Hermione and Ron get a little too close to the danger when they begin uncovering the clues behind the Chamber of Secrets (the movie even pits them against ferocious spiders that make those of "Eight-Legged Freaks" look innocent), but as was the case with the first film, this movie puts them on a stage of existence completely detached from the ongoing action. The heroes lack any sense of involvement in the final hour; instead, they come off more like observers of the game who allow the mind-boggling battles and confrontations to simply assault their senses. During the climactic battle, even the digital creatures have more screen presence than the actual flesh and bone players.

When it comes to the imagination scale, "Harry Potter" has everything it needs: brilliant visuals, endless ambition, offbeat storytelling, and characters who rush of the screen in constant splendor. But what does it all really amount to in the end? Not much of a payoff, I'm afraid. And if the books are in fact very close to the screen products I have witnessed, then the Harry Potter craze will have to remain as it is: oblivious to my concern.