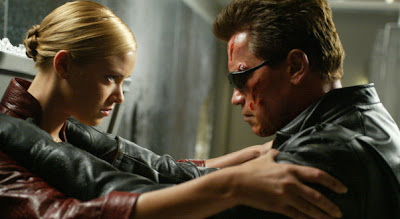 But does one truly have absolute control over what is or is not certain in the larger picture? This is one of the ideas that the latest "Terminator" flick plays around with, as it opens with one, then two, imminent shots in which machines are hurled through a time vortex and are dropped off in the present day.One, a cyborg in woman's skin who is known as the TX (or "Terminatrix"), has been sent back to eliminate possible supporters and accomplists to Connor's inevitable resistance to the machines; the other, a now-too-familiar T-800 whose primitive structure is seconded to the fact that he remains the one machine of the future who could be reprogrammed to serve humans, is there to find and protect one of those targets as well as Connor himself, who might also be in the line of fire if the TX crosses his path. John knows this scenario all too well, and yet when he is pulled back onto the radar, perhaps not entirely by coincidence, he still refuses to accept the possibility that some things in life may be out of his control. "It doesn't have to be this way," he insists to his protector. Ah, but does he even believe what he is saying to begin with? Like the movie he is surrounded in, this rebellious and distraught target of destruction is in a tug-of-war with fate that refuses to be resolved, even when vague hints evolve into disturbing realities by the time the plot sets the stage for its jolting finale.

"Terminator 3: Rise of the Machines" arrives 12 years after its predecessor, the exciting and, at the time, cutting-edge sci-fi thriller "Terminator 2: Judgment Day" (which was also the rare sequel that far surpassed the offerings of its original). In keeping with the tradition that was established then, this offering is the rare closing chapter of a trilogy that rewards, amazes, surprises and excites viewers all while leaving them anxious for more. That's no easy task for a franchise installment arriving on screen so many years after the previous, but once the celluloid drops its audience into its complex realities, somehow time dissolves and the experience feels fresh again. To say that it left me feeling giddy like a kid at a carnival is an understatement; the movie is so robust with kinetic energy, capturing the spirit of the summer blockbuster without always doing things the ordinary way, my senses were almost overwhelmed with adrenaline.

As expected, the movie does not pick up where the last one left us, either. Years upon years have come and gone in the life of our hero, and though John Connor (Nick Stahl) easily recalls those shocking confrontations with both protective and destructive machines during his teen years, he would like nothing better than to have them erased from his memory bank. In the present day, the 20-something rebel practically lives on the run, his motorcycle taking him from one small town to the next as if staying in one spot makes him feel like a sitting duck. After a highway accident that forces him to seek shelter at a nearby animal hospital to recover, he meets Kate Brewster (Claire Danes), an acquaintance from his youth whom he last spoke to mere days before the events of "T2" began to unfold. Kate now assumes he's just a junkie in need of a fix, unaware of what has happened in his traumatic life. But then a strange woman (Kristanna Loken) breaks into the clinic and begins firing rounds of ammunition, apparently seeking to kill her. Instead, the woman finds proof thatthe infamous John Connor is alive, well and possibly hiding nearby, which sets off a series of events in which our hero relives the deadly chases of his youth, Kate is brought into the deadly mix, and everyone's favorite Terminator (Arnold Schwarzenegger) reappears to protect both from the impending threat of the all new TX.

This "Terminatrix," even more of an improvement over the liquid metal T-100 of the last film, is a creature with a seemingly endless arsenal of abilities, like shape-shifting, identifying DNA samples by tasting them, utilizing multiple weapons attached to her right arm (flame-thrower, anyone?), and even hacking machines and hot-wiring them to perform tasks that assist her in accomplishing her missions. She is one big bad bitch, says I. And yet she still has weaknesses, a crucial detail which the movie must use if it expects us to believe that either of the human targets or the man-serving T-800 could actually stand a chance at defeating her. And even then, will her defeat really mean the end of this nightmare? The movie tells us at one point that the climax of the last film, contrary to popular belief, did not stop Judgment Day from happening—it only delayed it. This time, the looming threat of it is only hours away, which provides a much more narrow (and tense) window for there to be any sense of victory.

On a visual scale, the movie is the most authentic-looking in the "Terminator" series thus far; special effects guru Stan Winston has not only cleaned up the advancements he teased us with in "T2," but has also added layers upon layers of the technical structure, giving the machines both depth and pulse here when human flesh doesn't cover the cold hard metal beneath it. There are also other machines that populate the movie as well, like giant rotating gunners that seek and destroy any moving target, and flying ones that can scour hallways with ease while it searches for its prey. Winston and his team have always been exceptional artists for these kinds of movies, but here they have gone above and beyond the call of duty. Here, special effects don't make a conscious effort to be separate from the live action, either; they simply blend in with the foreground as if part of one real whole.

The movie, directed by relative newcomer Jonathan Mostow, lacks the mountain of new ideas that the first two films in the series toyed with, but in ways that's an acceptable flaw, because the concept of time travel lost its originality long before this movie was even a reality. On that level, Mostow is able to play with this concept in several other distinctive ways—like with solid camerawork and focused character development—and although he packs his picture with more chase scenes than necessary, he knows how to make them exciting down to the last detail (who couldn't love a sequence in which a machine demolishes block after block with a large moving crane?). Besides, the movie's climax is enough to excuse the lack of setup in earlier scenes; it is not only a surprising ending, but a brave, thoughtful and challenging one as well. At the end of "Terminator 3: Rise of the Machines," I was both satisfied and grateful with the irony of the conclusion, and its effective attempt to go against the grain of everything that was accomplished before it. This is not just a summer blockbuster at its most fattening, but also one at its most uniquely brilliant.

Action/Science Fiction/Thriller (US); Rated R for strong sci-fi violence and action, and for language and brief nudity; Running Time - 125 Minutes