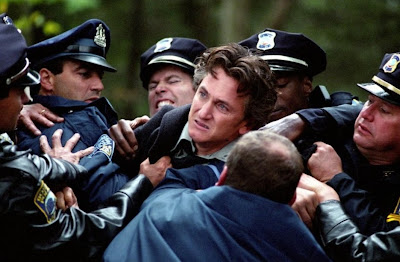 Clint Eastwood's "Mystic River" opens with an event that will inevitably challenge every moral character throughout the movie, a scene in which one of three childhood friends is dragged off against his will in the back seat of a car as his buddies watch on in paralyzed gazes. Two days later, the lad emerges from a nearby wooded area shaken and scarred by the abduction, enough so that it actually prevents him from openly discussing specific events of it with anyone. For some, that kind of detached response is just step one in dealing with the trauma and moving on, but for innocent little Dave, it is like an infected wound that is simply too painful to medicate. The passage of time doesn't do much to help soothe the soars, either, and eventually they evolve into something far more devastating and tragic than even the victim himself could have imagined. He may have escaped his captors, but his spirit never came home with him.

These are the kinds of issues that "Mystic River" is populated with—harsh, unflinching and frequently devastating doses of reality that get dealt out as if some sick twist of fate purposely patterns them that way. Absorbed with its own suffering, the movie also draws its characters into this misery like they've become all too familiar with the concept, and just as they share in the grief, so does the viewer, whose mere presence in the theater instantly makes him or her vulnerable to every moment of pain that is inflicted on the players. And yet all of this is what makes the movie so incredibly absorbing, too. Dramatic, brave and dynamic in its delivery, Eastwood's screen adaptation of the famous Dennis Lehane novel is one of the year's most well-made dramas, a consistently solid character study in which friends lose sight of happiness when tragedy consumes them.

At the center of the film is Jimmy (Sean Penn), a family man running his own convenience store who, early on, bids a casual farewell to his oldest daughter without realizing what fate has in store for her—she is going to be murdered that night. The next day, when she doesn't show up for her little sister's communion (even though Jimmy specifically instructed her to be there), the family shows little immediate worry (hey, don't teenage girls stay out late all the time?). Unfortunately, that notion only makes the trauma of her surprising death much more severe, and when he wanders onto the police crime scene where her body was just found, he snaps.

Meanwhile, we meet Sean (Kevin Bacon), a police detective investigating the murder with his partner Whitey (Laurence Fishburne). Both men are sticklers for details, especially when it comes to a crime that isn't ordinarily committed in their little town, but at times only Whitey can view things objectively; after all, Sean is one of Jimmy's oldest friends and refuses to assume that someone close to him could have been responsible for the crime. This causes a reasonable amount of friction between the two partners, particularly later in the movie when Whitey brings Dave (Tim Robbins), one of the most unlikely targets in the investigation, into the station for a round of heavy interrogation. And yet even after all the disagreements and findings they make in their search for a killer, it doesn't get them nearly as close to victory as they hope. Jimmy picks up on this prospect when there appears to be a significant delay in progress, and when the two detectives warn him about interfering with the case, he simply makes them a subtle promise: "If you don't find my daughter's killer, I will."

As these situations are building, Dave, the third of the three childhood friends, is struggling to keep his family life intact while still being plagued by the memories of his damaged youth. His son, completely unaware of his dad's old trauma, nonetheless is proud to have a parent so willing to ensure his happiness (playing catch, walking him to school every day), but his wife Celeste (Marcia Gay Harden) is not so passive. She is the kind of person who tries to maintain patience even at the most difficult moments, but when she mistakably assumes that her husband will finally open up to her about his hidden past, she's no longer sure that she wants to know what really happened. The fact that he is hiding something more current (and potentially more damaging) becomes the focal point, both for her and eventually for everyone connected to the story.

In terms of acting, "Mystic River" is without a doubt THE ensemble piece of the year. It's not enough that the film consists of raw talents like Laura Linney and Sean Penn, either; performances alone are saturated with genuine effort. Consider Marcia Gay Harden, an actress whose work won her an Oscar only a couple of years earlier; as Celeste, she reaches fits of emotional brilliance here that enhance the dynamics of all those around her, and when her character has to detach herself when her husband comes home the night of the homicide covered in blood and without a believable reason, she plays it out almost instinctively rather than by direction. Tim Robbins does similar work as Dave, particularly in later scenes when tension mounts against his character concerning his whereabouts on the night of Jimmy's daughter's unfortunate murder. Robbins doesn't forget about the importance of Dave's traumatic childhood, but he also doesn't forget about the danger that threatens him in the present, either.

Eastwood's photography is flawless in its effort to capture the atmosphere of the setting. Shot in Boston, exactly where the original story is set (despite reports that the studio wanted him to shoot the material elsewhere), the movie has a distinctive sense of presence, with long and crisp establishing shots that are inviting without necessarily hinting to the inevitable tragedies that will follow. The camera, moreover, moves between people and their predicaments in an effectively reclusive manner, almost like it believes it has no right to peer into the painful lives of these grieving individuals.

The screenplay by Brian Helgeland is fascinating in the way it builds on plot without actually dwelling on it; though it fills the details in as they are needed, its primary concern is on character behavior. And why shouldn't it be? When one deals with any kind of significant trauma in their lives (particularly more than once), it's only natural for their personalities to undergo change, either for the better or the worse. "Mystic River" shows us that scenario through varying stages of recovery and deterioration, all of it somewhat essential in the shaping, bending and/or breaking of the human psyche. This is not a movie about events, but about mentalities.

Produced by Bruce Berman, Clint Eastwood, Judie Hoyt and Robert Lorenz; Directed by Clint Eastwood; Screenplay by Brian Helgeland; based on the novel by Dennis Lehane