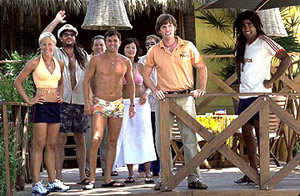 These "functions" I refer to are, naturally, the elements of timing. Here the Broken Lizard congregation (consisting of five of the film's lead male actors) have concocted a hybrid caper of horror and comedy that is neither very horrific or comedic in payoff; though their goals are seeped in the intention of poking obvious fun at a genre that was strangely commercialized in the never-ending "Friday the 13th" saga, the lack of genuine laughs is too distracting to make their enthusiasm at least passable. We certainly give them points for trying, but perhaps they need to reassess their synergy before taking another stab at such an approach.

The five members of Broken Lizard are Jay Chandrasekhar (also the director), Kevin Heffernan, Steve Lemme, Paul Soter and Erik Stolhanske. In keeping the tradition of their previous work, each of the men take a significant screen role in the film itself, in these cases five staff members of a resort getaway on the highly popular Paradise Island off of Costa Rica (if there is even such an island to begin with is a question better left answered by geography buffs). The island is spearheaded by once-popular summer songster Coconut Pete (Bill Paxton), a scruffy booze hound whose only interests as of late involve getting lucky with several of the attractive resort visitors. His staff members share in that kind of goal (in these kinds of movies, it's almost always essential for the main characters to lack major prospects), but when several of their fellow employees turn up dead and dismembered, the fear of a dangerous killer on the loose takes center stage and they are forced to put pleasure on the back burner. Conveniently, the movie also completely cuts them off from the outside world, a twist that is just as transparent in semi-spoofs of horror films as it is in genuine horror pictures themselves.

The assemblage of characters are colorful—there's Dave (Soter), the off-the-wall nephew of Coconut Pete who has stories to tell about murderous legends walking around the island jungles; Juan (Lemme), a diving teacher whose primary motivation in everything he does involves sex; Putman (Chandrasekhar), a tennis coach who always has a watchful eye on those who tend to rub him the wrong way; Lars (Heffernan), a masseur who knows how to induce any sensation by touching specific parts of someone's body; and Jenny (Brittany Daniel), the fitness instructor that enjoys Lars' company and refuses to believe any one of her fellow staff members could possibly be involved in all the recent mayhem on the island. Together, the group occupies the screen like more amusing versions of the "Jeepers Creepers" teens; their sense of annoyance is infectious instead of irritating, and there are moments when we really like some of them (the Juan character has several isolated scenes that left me chuckling).

Alas, where the movie ultimately fails is in the execution of its comedy and horror elements. The picture is very bloody (enough to deserve its partial classification as a horror film), but there is no sense of urgency or tension in any of the scenes to give them grip. A similar problem faces the movie's comedy elements; though there are moments and dialogue exchanges that warrant an occasional smirk, there aren't very many jokes that leave us rolling in the aisles. There is, naturally, an instinct to blame all this on the fact that comedy and horror elements simply don't mix successfully in movies, but there have actually been endeavors that have worked in such a way before (exhibit A: the quirky and jarring vampire farce "Innocent Blood"). Anyone could make this material work if they put their minds to it, but the members of Broken Lizard seem to have missed several of the key ingredients along the way.

Still, the picture isn't as mind-numbingly awful as most of the recent comedies that have plagued movie screens (some of us are probably still feeling repercussions from the experience that is "EuroTrip"). Having said that, "Club Dread" is watchable on some levels; it will certainly not bore you or insult you intellectually, and the ensemble has enough respectable pull to keep things moving in a certain direction. When it comes to outright thrills, alas, there have been better and more clever products done in this vein, and searching for them would perhaps be the better solution than having to pay money to see this film in a movie theater.