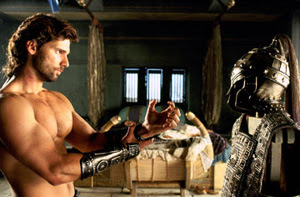 But here's where it gets rather hilarious: neither Bloom nor Pitt can claim any sort responsibility for the eventual mess that becomes of "Troy." That's because Wolfgang Peterson's movie is not just a simple lapse in overestimating the relevance of certain actors; it is an overzealous and fragmented endeavor on a much larger scale, too, parading around on screen as if it were in the grand tradition of those 1960s epics about heroes from the early ages. What both Peterson and his writer have crafted here, unfortunately, is not so much a story about great heroes as it is a tale about the war of egos, in which players engage in both physical and verbal battle less like dedicated warriors and more like centerfolds comparing anatomy sizes. If this is the best that Hollywood has to offer in the newly-geared summer crop of motion pictures, then we may have a long road ahead of us.

The movie is loosely inspired by Homer's "The Iliad," the least rousing of the famous bard's major poems about the Greek conflicts and the intervention of the gods. In that respect, however, at least writer David Benioff's screenplay remains true to the source; the seeming urgency of specific events is seldom enough to compensate for the lack of a genuinely interesting premise. As the film opens, the Greek army, under the authority of King Agamemnon of Mycenae, descends onto Thessaly in attempts to claim ownership of the territory, an action that is met with immediate resistance by the Thessaly's own dedicated inhabitants. Knowing full well the opposition they have faced in their attempts to secure every territory in the Aegeans, though, the Greeks send in Achilles (Pitt), the most revered and successful soldier of his time, who with one swoop is able to dispose of even the most fearsome-looking enemies without even breaking a sweat. His gifts as a warrior make him nearly invulnerable to every swoop of a blade, and such notions are also what make him the ideal candidate to help lead a wide-scale resistance on the land of Troy after Helen of Sparta, wife of King Menelaus, Agamemnon's brother, is stolen under their noses by the Trojan Prince Paris (Bloom).

Though obvious revisions have been made to the guts of Homer's story for the purpose of summer movie presentation, the core conflicts at least stay the same: Menelaus wants retribution for the thievery committed by those in Troy, but Agamemnon sees the declaration of war as a great opportunity to overthrow one of the most prominent realms in the Aegeans, and claim leadership of the entire area. Ah, but are those just the foolish dreams of a dangerous and powerful overachiever? After all, the city of Troy, surrounded by a seemingly impenetrable wall, has been challenged (and protected) for centuries under the watchful eye of Apollo, the god of the sun. The presence of Achilles would ordinarily spell success for the Greeks even in seemingly impossible scenarios like this, but the fact that the warrior's own intentions do not align with those of his superiors helps undermine the effort; while Agamemnon is there for glory and power, Achilles is simply there because the war may provide him an opportunity he has sought for years: seeing his name preserved in history.

The trouble with any epic-scale movie is finding a balance between the action and the drama, and fortunately "Troy" at least finds a point to keep them both on a level of consistency. When the foreground is busy with the clang of swords and the rush of exposed blood, it's intense; but when those sights dissipate, we get to see some genuine humanity within certain characters (at least those with the benefit of respectable acting talent, of course). One of the primary emotional cores of the narrative is Hector (Eric Bana), the oldest son of King Priam of Troy (Peter O'Toole), who recognizes the odds of defeat and makes assessments accordingly, but is sometimes bound to the misguided vote of the majority (who at one point in the film decide to provoke the enemy by ambushing them on the very beach they landed on). Throughout the dilemma, Bana has a stability and a resonance that are admirable, and when the film demands he share screen time with the likes of O'Toole, he emerges not as an inferior, but as an equal.

Unfortunately, what I have just described is pretty much all that "Troy" has going for it, too. Loud, excessively overlong, muddled and gimmicky, this is a movie that plays like an abridged version of a 1960s epic—it has so many ideas up its sleeve, but few of them ever play out beyond just a vague reference or promise. Consider, for instance, the relationship Achilles shares with his cousin Patroclus (Garrett Hedlund); though the movie ignores Homer's early suggestions that the two may have shared more than just camaraderie, it makes an even graver mistake by severing its focus on their friendship, and then not picking back up on it until after the young lad is slain in the Trojan ambush. In a movie that seems to be very intrigued by internal relationships, you'd think that the screenplay would care enough to give its major players a major sense of purpose, but no such luck. With the exception of one or two individuals, the movie's cast is basically a cluster of obscure character outlines, designed to fight, bark orders or say something philosophical during all kinds of combat situations (and what's more, the film's entire female cast is basically just an elaborate background tool set up so that the men have a distraction when the battles have died down).

The visuals, needless to say, are great; as is tradition with any Wolfgang Peterson film (even the mediocre ones), the camerawork is elaborate and breathtaking, and the movie's sense of special effects, while on autopilot, never create the impression that what we are seeing is nothing more than a fabricated image. But it's amazing how such a talented director could make such a beautiful-looking endeavor feel so darn empty beyond the exteriors. The narrative thrust is joyless and routine, and the pacing has no sense of consistency (excitement is never consistent; it is often staggered between lengthy dry patches). But let us not create the impression here that the movie's failure is dissonant with the spotty source material, either; in fact, it's fair to say that the script's primary problems share a lot in common with the Trojan Horse, the statue that the citizens of Troy unwittingly drag into their city walls when they assume the defeat of their enemies. Like that infamous landmark, "Troy" is built on a shell that at first glance is appealing, but reveals its deception when you least expect it to.

Drama/War (US); 2004; Rated R for graphic violence and some sexuality/nudity; Running Time: 163 Minutes

Produced by Winston Azzopardi, Wolfgang Petersen, Diana Rathbun and Colin Wilson; Directed by Wolfgang Peterson; Written by David Benioff; based on the poem "The Illiad" by Homer