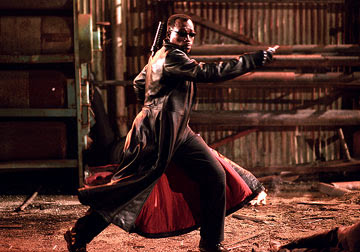 The plot - or rather, the shell of it - revolves around a scheme orchestrated by a group of random vampires that would permanently remove the infamous Blade (Wesley Snipes) from society. Apparently, everyone's favorite wise-cracking vampire hunter has been working overtime in extinguishing the bloodsucking menace from the neighborhoods of the world, and their population is dwindling (or, at least, the ensemble of dimwitted villains seems to suggest so). Fortunately for them, Blade is also not always the sharpest knife in the drawer when it comes to hunting, and when they lure him into a trap that forces him to slay an ordinary human (thus leaving behind an actual body instead of the standard ash piles), it finally makes him a tangible target for police authorities. His superior Whistler (Kris Kristofferson) advises him to hire and train others to assist him in his cause (especially since the general public consensus still believes that the notion of vampires is all myth), but those suggestions fall on deaf ears… until the feds raid his hideout and manage to apprehend him.

Enter the "Nightstalkers," a group of highly-trained bounty hunters who, like Blade himself, are hell-bent on removing the vampire presence on the streets. Among them: Abigail (Jessica Biel), a sly and quick-witted woman who also happens to be Whistler's daughter; and Hannibal King (Ryan Reynolds), a reformed vampire who is just as quick with the one-liners as he is with the gun in his hand. As a full-fledged faction, the Nightstalkers see the immense value in Blade's physical agility in fighting these creatures, and knowing full-well that the government's judicial system is in fact run in the dark by the vampire masterminds themselves, they opt to break him out. That is, alas, not an undertaking that sits well with Danica Talos (Parker Posey), the leader of this specific bloodsucker resistance. But fear not, because she has other cards up her sleeve, too.

Now enter Drake (Dominic Purcell), who is actually Dracula re-incarnated from years of slumber. Being a pure-blood immortal who can take any physical form he so chooses, the vampires believe he is the only one capable of destroying the "day-walker" which has eluded their society for so long. On the other hand, this Drake doesn't seem to be in a rush to do anything at the beckoning of a lesser generation of his species, either. Occasionally, in fact, the movie even shows his character, in a monster-like guise, ravenously feeding in the shadows on what appears to be other vampires. I suppose if you're THE Dracula, though, it's understandable that you'd be a bit crabby after being awakened from such a nice long nap.

The interesting thing here is that all of this sounds good in print. So why does "Blade: Trinity" go nowhere very exciting, then? Because it plays like a brainless fashion model that is trapped in the camera lights on a runway; in other words, it has all of the glitz but none of the guts. The franchise, needless to say, has had its fair share of critics in the past (I recall one online colleague even gloating over the fact that he walked out of the first installment without finishing it), but if there is one thing that few have denied here, it's that the cinematic take on Marvel Comics' dark and determined anti-hero has never been one to bore a viewer. "Trinity," on the other hand, gives the cynics just enough ammunition to justify their pessimism. It is a snooze-fest of narrative detail and conflict, as synthetic and disposable as the standard Saturday morning cartoon (minus some of the charm, of course).

The picture also makes errors in ways you don't anticipate. Though Snipes, as usual, plays the lead straight on without any restriction, the screenplay looks at him like some kind of disposable product placement. Oftentimes he drifts far into the background of the story, and the supporting characters (most of which are there, I guess, just to give the series a sense of freshness) are expected to pick up the slack. Alas, Goyer's new characters are also some of the most unintentional misfits you will ever see in this kind of ensemble. The villains themselves almost seem like they've been extracted from a Monty Python skit; they are disingenuous and shallow characterizations painted in deliberately-broad strokes, and their incessant use of sarcasm sends the film into unintentional self-parody on several occasions.

Upsides? A few, I suppose. The first chase sequence, in which Blade shows off a few new nifty weapons as he hunts down a group of vampires through a freeway tunnel, is particularly zealous, and a set of three fights in the climax that cut into each other recall some of the best moments about the first two movies: moments when the conflict was wall-to-wall, and the players didn't just stand still so they could watch the big guys fight to the death all by themselves. Visually, the movie is also top-notch - it continues the tradition of capturing both characters and conflicts in settings that are so detailed and reaching that they practically jump off the celluloid and close in on you. But again, this is a series both with an incentive and an established reputation to do intelligent things; we do not need to see the material in any kind of deluded form. "Blade: Trinity" may indeed be the last film of this series, but it's doubtful that anyone will be complaining that much after seeing it for themselves.