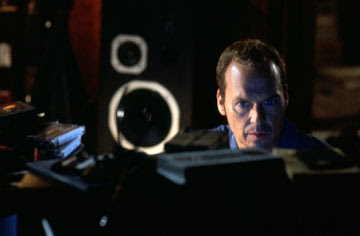 He or she who is able to emerge from "White Noise" with a full perspective on the plot should be regarded as a miracle worker. Here I am, a movie critic writing a review for a movie that I observed with the utmost attention for a full 100 minutes, and I can't even bring myself to come up with the words to describe it - other than saying it wants to be both scary and stimulating. Of course, being an endeavor that lacks any kind of solid framework, it fails miserably on both counts. There is certainly very little doubt that someone, somewhere, high up in the Universal Pictures chain of command saw a promising result from this sort of premise… but what in the world are the filmmakers trying to say with it here? How do they expect their movie to amuse or engage viewers in the slightest if it doesn't take the time to offer necessary insights into enigmatic clues and puzzles?

The movie, at least, is spot on in one regard: it respects the long-running tradition of January cinema releases by being both lousy and miscalculated. Guided by a screenplay that seems like it was written in nothing but broad strokes, it sleepwalks from one dreary segment to the next, occasionally breaking for some visual jolts, and only volunteers useful information in very small doses. Furthermore, there is never a moment during the picture that suggests we are ever heading towards a full reveal of the story arc; rather, it plays like some sort of bound-and-gagged kidnapping victim who falls to the floor in defeat instead of trying to remove the restraints so we can hear what it has to say. Horror films (especially those recent ones in the vein of "The Ring") are obliged to be forward with their narratives because moviegoers require details in order to fully realize (and appreciate) the payoff. This movie does none of that, and by the end, we aren't really intrigued by the resolution as much as we are bored with the whole concept.

The film stars Michael Keaton as Jonathan Rivers, an architect whose wife, a famous writer named Anna Rivers (Chandra West), mysteriously goes missing after her car is found abandoned off the side of a local river channel. The authorities suspect she has drowned in the waters, but Jonathan refuses to buy into that possibility unless a body is found. He stares off into space, makes pleas and offers hope via press conferences, and sits quietly in his living room watching home movies as he waits for new information to come in regarding her disappearance. Days later, unfortunately, she turns up just as they expect her, and suddenly the man's once-happy life, recently enhanced by news that his lovely bride might be pregnant with his child, comes crashing down.

But his grief is quickly sidelined by new and strange occurrences that are beginning to happen in his home. His phone's caller ID picks up incoming calls from Anna's now-inactive cell phone. He hears strange things between static when he answers it. And seemingly out of the blue, he crosses the path of a man named Raymond Price (Ian McNeice), who insists that Jon's deceased wife is trying to contact him from the other side. Though the notion is bizarre and infuriates the grieving widow on first suggestion, it is nonetheless something he doesn't want to completely ignore, either, and after these odd little occurrences continue, he pays a visit to this Price character looking for answers.

The script comes up with quite an odd setup for its supernatural undertone. Price, we are told, is being contacted by the dead via what is referred to as E.V.P., short for "electronic voice phenomena," in which basic devices like a computer system and voice-recording software can instigate conversations with those who have passed on into another realm (I guess). Many of those spirits that initiate contact with the living are those who have an important message to deliver to a loved one, we gather - but on occasion, a hostile spirit gets through the communication lines and decides it wants to stir up trouble for the living. Unfortunately for Jonathan, messages that may be coming from his wife also seem to involve those same kinds of hostile spirits; often, her voice and image are washed out by a series of shadowy figures that shout obscenities back at him from the other side. The only question is, are these angry spirits in any way related to what Anna herself is trying to say to him through the E.V.P.? And if so, what does it all mean to him?

Aside from a half-hearted and immensely under-nourished premise, the movie suffers from the notion that none of its other aspects - actors, visual effects, etc. - have much going for them, either. Michael Keaton, who is an admirable star in even the most insufferable material, falls flat in this role as a grieving widow here because his persona is emotionally despondent through most of the plot situations (not the least of which is his wife's untimely death). The visuals, meanwhile, lack spark; director Geoffrey Sax approaches subjects and settings without any sense of distinction, and his camera moves around as if it is unsure of what the most important element is of a specific angle. And what of that howling climax? Good question. The film sends us barreling through a synthetic series of shocks, revelations and twists for a good 90 minutes or so, but then coughs up a conclusion that is so flimsy and unanticipated that it creates new uncertainty instead of resolving older issues.

If there is indeed a satisfactory explanation to all of the logic that "White Noise" throws at us, I'm all ears. But as it stands, this is not the kind of product you should be going to if you are looking to be productive while studying narrative details. Those who bother trying here will no doubt exit the theaters pulling their hair out.