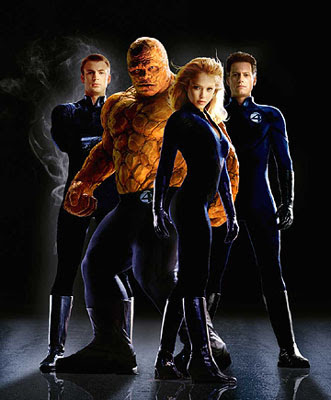 "Fantastic Four" is the most insipid and dispiriting of the super hero comic book screen adaptations of recent times, an obnoxious muddle of a movie in which potential adventure is sideswiped in favor of watery characterizations and dialogue that feels like it was lifted from five or six reality shows. As a concept the movie houses vast potential - its focal points are seized from a foundation which has garnered great success on the printed page for decades - but as a full-fledged undertaking it quickly crosses the threshold of stupidity, expecting audiences to tag along all the way through as if hinting that the outcome will justify the build-up. The problem: if there is any payoff here, it lies in the notion that the movie actually ends before it gets even more stupid than it could have. At a time when the superhero film has been cinematically reinvigorated by crusaders who are driven by inner conflict rather than absurd crime sprees, four clunky human mutations whose superpowers are their only distinguishing characteristics just don't stand up.

Viewers who have come to recognize the four title heroes via their knowledge of the source material will find themselves in a murky predicament here: either their level of disappointment will be far greater than that of the casual observers, or their dedication to the comic book will unwittingly cause them to ignore general inadequacies (which, in this case, would probably be a lot harder than it looks). It is always more of a tragedy watching something you care about turn into such mush when you have so much investment in the source, but to imagine anyone from any part of the Fantastic Four fan base walking away from this movie without the slightest notion of shock on their faces is a scenario far too unlikely to picture. For them, watching this movie is kind of like watching your kid spend his entire college tuition on prostitutes and liquor.

The movie opens with an intriguing setup. Reed Richards (Ioan Gruffudd), a by-the-numbers scientist with apparent expertise in everything, pitches an idea to a high-ranking business man named Victor von Doom (Julian McMahon) that would require he and a group of scientists to venture into orbit to study an oncoming solar storm near Earth - a storm, Richards suspects, that is much like the one that passed through Earth millions of years ago and jumpstarted life itself. Doom's immediate skepticism comes less from the fact that the proposal comes from a guy who has caused lots of financial crashes with his investments and more from the notion that his new girlfriend, Susan Storm (Jessica Alba), will be part of that same mission. Susan, you see, was once Reed's own girlfriend, and though the relationship fizzled there is still an air of the unresolved surrounding them. The money man eventually agrees but takes the opportunity to follow them on board the space vessel to keep an eye on his ravishing girlfriend.

The expedition is rounded out with two additional attendees: Ben Grimm (Michael Chiklis), a sweet and good-natured guy who doesn't appreciate smugness, and Johnny Storm (Chris Evans), Susan's brother, who spends most of his time wisecracking when he's not swooning over all the hot babes that cross his path. Their vessel docks at the precise location in space it needs to in order to prepare for the storm, but a sudden shift in graphs reveals that the disturbance is way ahead of schedule, and the ship and its members are not yet equipped with the security to put up a shield. In essence, the five aboard the station are exposed to the storm, which causes (get this) brief black-outs, and they all wake up in a hospital on Earth in quarantine, awaiting a prognosis on how the solar storm has affected them (never mind that surviving in itself should be the most remarkable detail for these five).

In line with Richards' theory that the solar storms contain elements that enhance whatever they pass through, the victims (or, rather, the beneficiaries) start to experience wild physical changes. Reed can stretch his body like a never-ending band of elastic. Susan can render herself invisible when exhibiting strong emotions, and can create force-fields. Ben develops a thick rock-like skin that turns out to be impenetrable to almost everything. And Johnny can set his entire body on fire without it harming him, in essence making him look, well, like a human torch. Each of their abilities, astonishing from the perspective of avid onlookers, are nonetheless greeted with rather casual responses from their hosts, which is but one major disservice to this film. Think about it: if you can make your body light up, stretch, become rock hard or look transparent, are you actually going to greet your transformation with any kind of emotion resembling calm? Highly doubtful.

Narratively the movie seems to be going for what the "X-Men" films did, which is create a universe where various mutations can be seen through the eyes of multiple hosts rather than one or two (as is the standard for the genre). Whereas those films worked for their ability to function as crowd-pleasers in addition to developing their characters, though, "Fantastic Four" appear to have neither the desire nor the wisdom to handle more than one thing at a time. As such, it dedicates 90 percent of itself to exploring the characters various superpowers - most of which become tired and uninteresting past a certain point, and none of which are equipped with very compelling identities standing behind them. The most interesting character in the movie, in fact, is Victor von Doom, whose own transformation as the metal-clad Dr. Doom at least carries an air of nostalgia. Julian McMahon has a couple of good moments with character realization, and his constant growl of a tone has that condescending quality you would expect of aspiring superhero villains.

But where is all the action? My guess is it has either been left on the cutting room floor, or is being saved for the sequel. Either way, what you get here in "Fantastic Four" is not a film that is very interested in providing the slightest visual payoff. The brief special effects scenes are cheesy. The confrontations are overdone. And as for those ambitious superpower displays? I simply cannot get past the fact that practically everyone treats them like they're simply elements of showmanship rather than gifts or curses. Johnny Storm, for example, seems so unalarmed by the fact that he can trigger fire from his body at will that it's more disturbing than it is interesting, and his exploitation of it for fame is almost bewildering. I wouldn't like to consider myself an expert on human nature in a universe painted with as much silliness as this, but if you were to come across a guy who could reach the temperature of the sun in just a flat minute, I seriously doubt that the first thing on your mind would be to ask him for his autograph.

And how about that dialogue? A kangaroo could write more persuasive lingo than what screenwriters Michael France and Mark Frost provide here. Often we get sequences in which characters just seem to ramble on and on as if filling in for something else to step in and take over, although consciously aware that there is no hope of anyone else doing so. At times we even get clunkers like, "It's clobberin' time!", or my personal favorite, "Dude, where's your ears?" In truth, though, the film is so littered with these kinds of small annoyances that it's more like watching a collection of failed amateur stand-up routines rather than an actual movie. Even at a level of complete and utter absurdity, "Fantastic Four" is a complete wash-out, a cartoonish mess that screws us out of a ticket price and doesn't even have the decency to leave something behind to show for it.


Action (US); 2005; Rated PG-13 for sequences of intense action, and some suggestive content; Running Time:110 Minutes