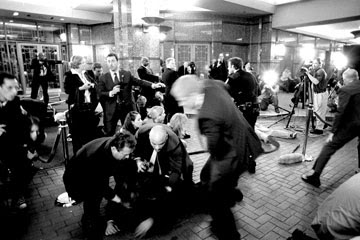 Had reality been the foundation of this approach, the film would generate instantaneous sparks for its ability to make us vividly relive something pivotal in history; in the form of fantasy, the result feels awkward, displaced, contrived and rather tasteless. That is not to say that the premise is irrelevant or even unnecessary; in our current political climate, much of what it emphasizes makes up a solid chunk of an equally valid argument. But the movie does not argue or provoke like it is studying reactions. Rather, it plays the material like straight textbook history, reciting facts and then occasionally throwing in appendages about how certain world factions might respond to such a life-altering event. Without directly confronting the behaviors and attitudes associated with its theory, the movie leaves us with uncertainty, vacillation, and worst of all, emptiness.

The story, for lack of a better word, opens on October 19th, 2007, on a day that witnesses in interviews talk about with sober conviction, as the camera struggles to reveal their anguish through mere expression rather than asking them to disclose everything verbally before the narrative calls for it. On this notorious day in history, we are informed, President George W. Bush has flown to Chicago to speak publicly at a forum for the city’s economic authorities. As is usually the case when the current president descends into the public realm to speak in front of the common folk, dissenters of all types flock to his appearance. On this particular day, however, the size of an organized protest is exceedingly large and hateful, an observation that is further verified by a cop who talks about the public gatherings like riots in the making rather than peaceful displays of free speech. Most individuals on the other side of the fence would not read much into the prospect of political demonstrations being angrier than usual as being anything unexpected or worrying, but to a movie that has clear distinction as to where it’s going, the events are tools of foreshadowing. Police fear they have no control over violent mobs of gatherers. Bystanders in the crowds manage to break past security lines. And windows of uncertainty are created when the President decides to shake hands with commoners outside the Sheridan Hotel.

All of this builds to a distinct climax in which Bush is shot by an unknown assailant, rushed to the hospital, and thrown into emergency surgery before perishing from injuries related to his lungs and heart. We witness the immediate reaction in the Chicago streets, in the form of rows of protestors shocked with glee, some of them announcing the news through megaphones as if the event warrants some kind of public liberation. We half expect the movie to follow with this route and project the scenario into other communities, other societies, perhaps to catch a glimpse into the assassination’s repercussions and the stark rhetoric that would no doubt result from witnessing the demise of one of the world’s most notorious leaders. But alas, “Death of a President” has other prospects in mind. Suppressing the effort to capture a glance into a world that no longer sees Bush as one of its primary powers (particularly because of violent means), it instead focuses on the mystery of his murder. Who did it? What was the reasoning? And who will answer for the crime that has no doubt paralyzed a nation with shock and awe?

The problem with this approach is that Bush’s line of detractors is simply too broad for a movie in which the scope of things requires everything to be resolved in 90 minutes. Administrators in the education system, immigrants, middle-class Americans, democrats, pro-choice advocates, economic conservatives, celebrities, social liberals, anti-war protestors – to compose a list of various factions of people that are at odds with the policies of the Bush administration would itself require greater time and detail, not even counting any and all attempts that are necessary for a movie to pinpoint a person in any of these populations that would match the profile of a potential killer. As such, the film’s last half is labored with over-wrought and calculated assertions of how a nation-wide manhunt would look if a Bush assassin were to, in fact, escape radar so easily following such a shooting. Gabriel Range and his co-writer Simon Finch seem to underestimate the negative reputation of Dubya enough to permit this scenario, and that is grievous; in this climate, in a world where attitudes and behaviors are shaped by the persistent threat of terrorism, the fact that anyone could make an attempt on our president’s life and manage to escape completely unnoticed for any period of time longer than hours is totally preposterous.

If the movie does get something right, it is the assumption that the knee-jerk political ramification of such a major event would likely follow with the tradition of the Bush administration’s desire to racially profile the public in search of likely suspects and conspiracies. Indeed, the actions of a newly-appointed Commander-in-Chief come across as plausible and in-character, as President Cheney looks for morsels of likelihood that the assassination of his boss was ordered by government officials in Syria, more than likely as leverage to fuel his non-stop desire to encourage military confrontation with countries whose rise in power inspire all kinds of fear and worry in western civilization. Herein lies hints that the movie knows and acknowledges that its subjects are primed for mass judgment in history, but they are planted seeds that are never given the chance to sprout, let alone bloom. “Death of a President” takes on a subject that is a playing field for all kinds of thought-provoking dialogue and argument, but the movie is like an episode of “Murder, She Wrote” for the political arena. The slant is intriguing on paper, but on screen it comes across as both ineffectual and maddening.