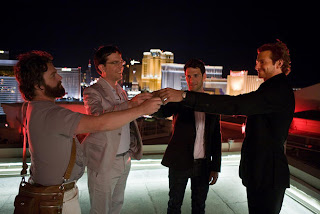 A stroke of irony fills the air in one of the parting shots of Todd Phillips’s “The Hangover,” when a character uncovers a digital camera containing evidence of a night of exploits and hands it over to Doug Billings (Justin Bartha), who suggests that he and his friends view the photos “only once” and then delete all of them from the memory card. What this scene ultimately accomplishes is two-fold: 1) it is beneficial in tying up various loose ends purposely left open throughout several integral moments of the plot; and 2) it gives certain audience members like me an outline in attempting to reach a coherent assessment of the picture as a whole. For two hours we are cheerfully pummeled into visual and verbal submission by incredibly direct dialogue, embarrassing character situations, impossibly convoluted scenarios and ridiculous plot twists. We laugh at most of them, and sometimes even laugh at the fact that we’re being so entertained by such showy nonsense. But it is nonsense purely for the moment, because once those theater lights lift and we return to reality, we are content in the notion that the experience, no matter how amusing, is over. Here is the kind of movie that rightly disposes of itself at the moment it realizes that mindless fun is only funny for a brief time, and never in multiple doses.

The director may have mastered this trait out of mere practice. Previously behind the camera of comedies like “Starsky & Hutch,” “Road Trip” and “School For Scoundrels,” Todd Phillips appears to be content with his films being instantaneous rather than lasting, his only possible exception being “Old School” which remains greatly enjoyable even after first-time viewings. That is not to say a director of his notion is less capable of transcending the laws of generational comedy than, say, the Farrelly Brothers, but perhaps his forte in immediate gratification might, at some point, find itself on the outs un as a new generation of movie-goers arrives and expects laughs in the form of something much more frontal and vulgar than what “The Hangover” is willing to provide.

Having said that, the comedy here is rather funny. The narrative deals with four characters: Doug (Justin Bartha), Alan (Zach Galifianakis), Phil (Bradley Cooper) and Stu (Ed Helms), a group of friends who decide to have an elaborate, care-free bachelor party on the eve of their friend Doug’s marriage in the sin-soaked streets of Las Vegas. Each person is executed using distinctive character traits – Alan, for instance, is Doug’s soon-to-be brother-in-law and has unwittingly perfected a knack for being either off-the-cuff or redundant in the way he participates within a group, while Phil takes charge of situations and often embarrasses himself, and Stu treads through the screenplay as if looking for his testicles.

The formula for success for a movie like this lies in its ability to pit such quirks in a conflict of great comedic challenges, and “The Hangover” is armed with an inspired arsenal of them. We meet each of the important players on an individual basis, getting a sense of their quirks and flaws, before the plot requires them to gather into one entity and fold them into the impending plotline. The bachelor party does indeed, at least, goes off without a hitch… except that no one in the group actually remembers anything that happened the following morning, especially when the realization hits that the hotel suite is thrashed, teeth are missing, a screaming infant is in the closet, wild animals occupy the bathroom, a mattress hangs outside the window, and a certain groom-to-be has done a mysterious disappearing act. A trek in search of answers ensues, and the three remaining men, recovering from major hangovers, begin to slowly but surely put the pieces of a series of missing hours together in hopes of solving the mystery and returning their friend to his bride-to-be before the wedding day passes.

Further conflicts arise into the journey, including one where Stu realizes that he has married an attractive escort named Jade (Heather Graham), another where the Las Vegas police are after the remaining three for stealing a cop car, and another still in which an exotic cat that was stolen from Mike Tyson’s property is demanded for return, lest the culprits find themselves on the receiving end of Tyson’s violent temper. Chief among these subplots, however, is one involving a group of violent Asian thugs, whom are searching for thousands of dollars worth of missing casino chips and insist that poor unknowing Allen is actually the reason they have been misplaced. Their demand: come up with the missing money before sundown on the eve of the big wedding, and the mob will turn loose their friend in time for him to get hitched. Otherwise, his life is expendable.

That this all happens in 100 minutes is a resounding feat, the fact that it is all delivered with such a high pitch of comedic energy is another entirely. The laughs are non-stop. The characters are quirky without being self-aware. The dialogue is pointed and precise. And the endless array of embarrassing situations are a platform for all sorts of seeming spontaneity, as the laughs come not from actions but rather reactions, which by nature should seem unpredictable in the hands of open-minded actors. You get the sense, while watching it all unfold, that these men aren’t playing characters as much as they are willingly placing themselves into those situations, just to see how normal people would respond to the stampede of conflict thrown at them. It is easily the most unlabored comedy of the recent past.

But seriously, how many times has a story like this been told? At what point did the bachelor-party-turned-mishap caper become relevant again? Phillips knows these questions don’t necessarily need answers when even the most basic formula is conveyed with genuine comedic impulse, and at least “The Hangover” knows where to go for the good laughs. But they are momentarily laughs all the same, slightly dwarfed by the realization that we know all will be forgotten by the time the end credits have finished rolling. That makes the movie limited in its eventual appeal, but it does not mean it is something to be ignored, either. In this era of mass depression in all things media-related, though, at least a one-time laugh is better than none at all.