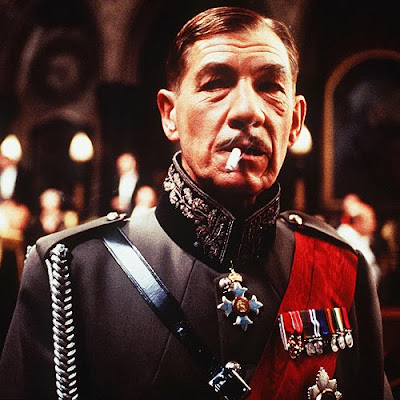 What drives this ruthless opportunist to such heinous actions? Here is a movie that interprets his reason through fascist inclinations, which clarifies the choices in style: it seems grounded in an early 20th-century European society with thin veneers of Nazi structure, and his players don’t so much walk through scenes as they march. What’s more intriguing is just how comfortable they all seem in this environment. A big risk (and sometimes grave mistake) in many modern Shakespeare adaptations is the sense of displacement a filmmaker can leave unanswered when the language and story are moved into an era that lacks a suitable anchor for them, but “Richard III” offers a vision of open-ended movie rules that allows the Elizabethan culture to take root. It’s as if all those ideals, those archetypes and their key motivators belong exactly where the director places them.

At the center is Richard, a man of physical deformity and cerebral cunning whose thirst for power and prestige become the driving influences of an intense psychological unraveling. Here, the diabolical would-be monarch is played by Ian McKellen in a performance of scrupulous intensity: suspicion in his character exist from the onset, but his skill for oratory acts as an injection of some powerful sedative in those less inclined to know him: they fall right into his trap and surrender doubt in his clutch, sometimes in only three or four clever sentences. The famous early scene of Richard and Lady Anne is meant to create immediate disdain: over the corpse of her husband who died at his very hand, he manages to woo the grieving widow with shameless precision, and her vulnerable state is of such that there is almost no resistance to the advances. The effect is amplified to disbelief later in the story as we watch both show up to a family gathering, and Anne is on his arm as a doting wife and curator, ignorant of her new husband’s eventual cruelty.

These skills for deception are exemplified over the entire course of a narrative rich in political intrigue. At the opening of the story, King Edward IV (John Wood) has been crowned king amidst a flurry of public fanfare, and seemingly faithful brother Richard (whose posture is broken by a hump and other physical deformities) observes the event with mimicked enthusiasm. As third in line for the throne, few other than those close to Edward’s inner circle see him as anything more than a lurker in the shadows with little influence. Those closer to the source, however, see him as a “bottled spider” waiting to escape, and when their brother George (Nigel Hawthorne) winds up imprisoned in the tower of London on manipulated accusations of possible treason, it flicks on a light switch in the minds of several suspicious characters, including Edward’s loving but cautious wife Elizabeth (Annette Benning). Others, like the all-knowing matriarch of the York house (Maggie Smith), observe the events as they disintegrate the family without direct interference, but in a critical plot point curses her youngest son to damnation for all of the tragedy he has wrought on the family.

The screenplay penned between director Richard Loncraine and McKellen is relatively faithful to the source (even though much of it has been abridged), but its delivery carves out many of the internal characteristics for the sake of projecting them effectively in more modern cultural ideals. By using the concept of dictatorship as the backdrop, they have found a fitting scenario that does not simplify the details into mawkish melodrama (as Baz Luhrmann did with his version of “Romeo & Juliet”). Those that observe what unfolds with investigative eyes will find obvious parallels: the union between Anne and Richard symbolizes Hitler’s deceitful union to a German populace brainwashed beyond reason, and the assassinations of critical characters, like the charming Lord Rivers (Robert Downey, Jr.), exemplify his historical desire to eliminate all political interferences. The British accents are clear indicators that this “alternate society” is not necessarily German, but one that occupies aspects of both, and the flag of the House of York uses a symbol that echoes the swastika. And then there is the quiet but unnerving face of the Duke of Buckingham (Jim Broadbent), who grins with pleasure in assisting his corrupt boss climb all political ladders but pulls back long enough to remind him with foreboding tone of all his promises – and no doubt those high up in the Nazi camp were assured things that never materialized, otherwise there would not have been so many that surrendered at the end of the war before the Fuhrer’s corpse was even cold.

These ideas and details were all, of course, well established in the original texts long before either McKellen or Loncraine got their hands on them, but in a movie like this they seem to evoke more defining stances as opposed to interpretive ones. Certain scholars argue that Shakespeare wrote many of his works about universal powers so they could be told with relevance long after his demise; if that were truth, then “Richard III” labors on that idea to more than sufficient presentation. Loncraine has made a handful of mild successes in the recent past (“Wimbledon,” “My House in Umbria”), but here he is in top form, and his cinematographer Peter Biziou (“The Truman Show” and “In the Name of the Father”) shoots the material as if a reporter documenting political rallies (there are wide-reaching shots, sharp focuses on characters in busy crowds, etc.). But it is in McKellen’s sharp and consistent script that the primary source of passion dwells; his investigative nature separates all of Richard’s layers for the sake of focused deconstruction, and he brings it all around in a performance that is certain, dedicated and perfectly in tune with what the story requires. “Richard III” is the kind of movie that earns the right to interpret the bard’s ideas through alternate perspectives because it does so without sacrificing its core values or integrity. How refreshing at a time when modern artists often misinterpret Shakespeare’s themes and mask them with incongruent explanations.