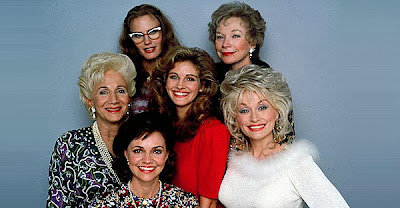 The six women at the center of “Steel Magnolias” are the embodiment of a social class that went extinct in the trenches of current cultural standards. Their audacious impulses carry the undercurrent of flamboyant storytellers, and when they engage in gossip or berate one another with colorful insults and euphemisms, their convictions are solely from a place of virtue. Sometimes their honesty is laced with a bravado that invites outright dismay, and hurt feelings are only momentary to the shock of a cold truth splashed in one’s face. What ties them together goes to the root of all perceptions of human compassion, but they are not dependents whose lives only mean something with one another filling in a void. They have formulated an unending series of friendships because, basically, their depth is enriched by those who share the same capacity for love, and that capacity is a refreshing sentiment in the hands of a world too busy to stop and smell the flowers.

Many a movie came and went in the 80s about characters caught in that paradox between old traditions and the evolving times, but few have persisted in the mind as effectively as Herbert Ross’ love letter to southern belles. What gives it that honor – that rare and elusive distinction of imprinting itself in the memories of moviegoers, even those who easily snarl at melodrama? There is a suspicion in many that it endures because of its pitch-perfect casting, and perhaps its ability to balance tragedy and triumph without overt contrivance; others distinguish it as a treasure trove of quotable dialogue, and others still marvel at the ability of the screenplay to have its leads casually reveal their stories with angular descriptors. Perhaps it is all of those things, and more. But movies that transcend their times ultimately do so because they have earned the faith of their audiences, and “Steel Magnolias” is so immersed by the conviction of its story that in a way it becomes an extension of our own human experience.

The story, adapted from a play that became widely popular in the 1980s, adopts the formula of melodrama. In a southern suburb where chirping birds and an optimistic musical score set the precedent of high-spirited emotions, an ensemble of colorful ladies wanders into the frame. Among them is Truvy (Dolly Parton), a “glamor technician” whose out-of-home beauty salon serves as the picture’s primary locale for the dialogue-driven antics of the others. Within those walls they share stories, argue, exchange observations, and console one another over the plight that causes disrupt in their lives, sometimes to extreme degrees. This is especially true for M’Lynn (Sally Field) and her daughter Shelby (Julia Roberts), who arrive at the start of the picture on a mission to be thoroughly made over for Shelby’s own Easter wedding later the same day. An underlying tension builds between mother and daughter as they banter over disagreements about life choices, and the full scope of their tumultuous relationship is revealed when Shelby goes through a diabetic seizure. Does she take her disease seriously? And does M’Lynn’s desire to control her lone daughter come from a place of genuine concern, or something greater?

Meanwhile, we meet the others in gradual passages. Annelle (Daryl Hannah) is a shy but eager newcomer who applies for a job with Truby’s salon, and finds embrace in the warm camaraderie of the others. Clairee (Olympia Dukakis) is a worldly and cheerful socialite that entertains others with cheerful yarns about southern hospitality. And Ouiser (Shirley MacLaine) is an unkempt grump who observes the world through jaded lenses, thus making her a target for countless wisecracks. The magnetism they possess as individuals creates a surface intrigue, but it is collectively that their personas achieve undeniable energy, especially in ensemble scenes. Consider, for instance, a church sequence in which Clairee gossips to the others about Ouiser’s new beau being seen with his car in her driveway several nights a week, and Ouiser retorts in cynical fashion (“My secret’s out: I am having an affair with a Mercedes Benz.”). Most actors would overplay the initiative of those lines to create big laughs, but Dukakis and McClaine downplay the edge because they see it more as an opportunity to establish one another as opposing magnets. Little of this would work in the hands of those too passive to engage the material beyond simple line reciting.

Much of the film plays that way – the parley often exists out of a context in order to set the tone for other events, many of them sullen. M’Lynn is conflicted over Shelby’s need to have a child with her husband, and insists adoption to be the safest route because of her health issues. Shelby refutes the concerns, claiming they are simply ways for her mother to continue controlling her. Later, when a child is born, Shelby’s health deteriorates in such a way that it establishes a new strength between mother and daughter: M’Lynn volunteers to give her child a kidney in order to prevent her from living life on dialysis. What does this do to the others? In step with their tradition, the other four rally like the most faithful of family, and exhibit resounding presence even when the screenplay does retreat to the melodramatic nature of the formula. But we don’t choose to hold this prospect against “Steel Magnolias” for two reasons: 1) it is the nature of this genre, ultimately; and 2) moments that appear obviously manipulated (such as the mediocre funeral sequences that changes from crying to laughter in just a few seconds) are not necessarily done so out of malice or cheap effect. The movie makes peace with those choices because it earns the right to use them.

The movie is not without flaws. The supporting characters  exist as mostly background distractions, for no other sake than to supply the movie with a sense of space beyond the chatty bubble of women. Dylan McDermott is miscast as Shelby’s husband; in a role that ought to demand more presence, he appears aloof from the material. The side stories – of women dealing with conflicted husbands and children or struggling to re-establish their place in the world – don’t achieve take-off because the core function of them all is to supply the M’Lynn character with a support system for the events to follow, and sometimes that’s disheartening. But what else can you say about six women who simply persist so strongly in the mind? “Steel Magnolias” is not a movie about the emotional baggage or the need to inspire it, but about the knowledge that there are still those among us who are meant to be there when we need them in times of great tragedy or triumph. Sometimes, really, that’s all you need.

Produced by Ray Stark, Andrew Stone and Victoria White; Directed by Herbert Ross; Written by Robert Harling (based on his play “Steel Magnolias”)