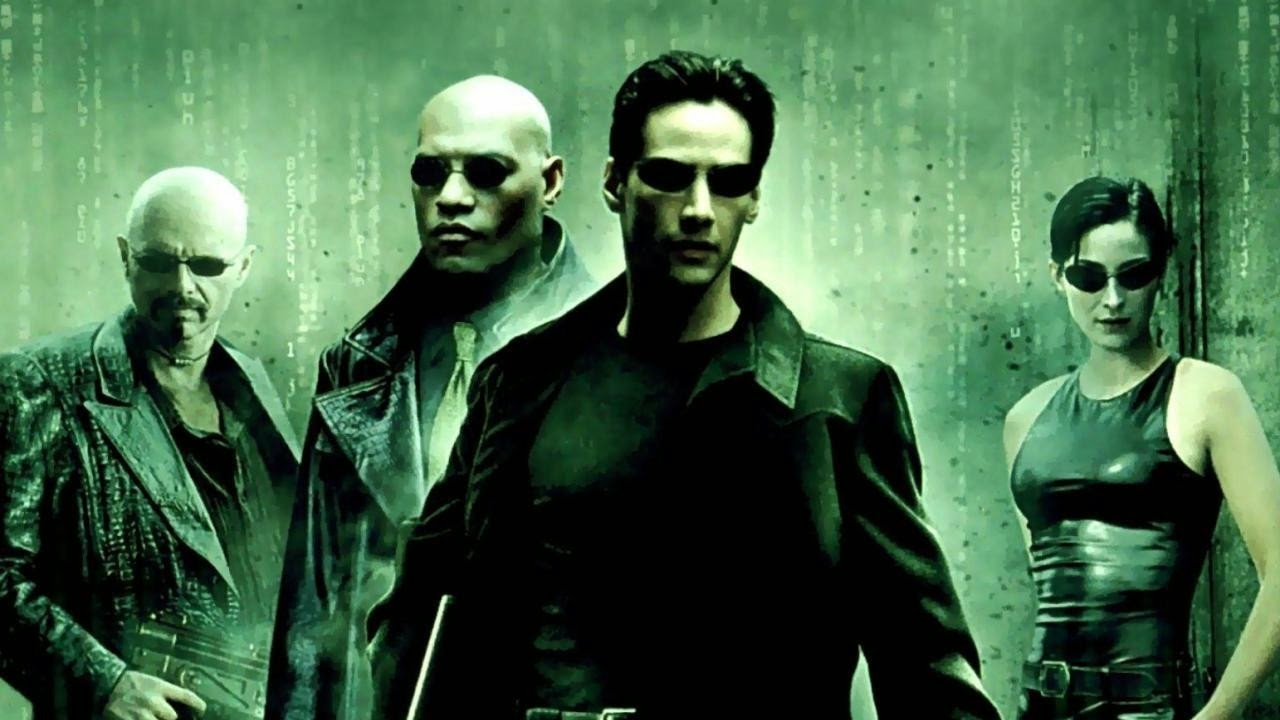 The pointedness of those questions has always been a constant in science fiction, but they were not exactly the first thing on one’s mind fifteen years ago when “The Matrix” arrived at the epicenter of our imaginations. Now, in a time when the undeniable visual genius of its filmmakers has been eroded by ongoing technical advancements in the film industry, those insights are the exposed spinal remains of an ambitious and rich action picture. Here is a film that arrived at the dawn of a new age of scope when the transition between centuries conjured up silent expectations of what could be possible on celluloid, and it created cataclysmic changes in the way movie artists not only wrote stories, but staged camera angles, chase scenes and even basic shoot-outs. Seeing it all now, years after its skill and innovation have dated in typical ways, the movie itself remains an insightful commentary on the rebellious nature of the human soul. And the fact that such perceptions continue to exist in an endeavor that might have otherwise been just a startling blip in the time storm of cinema suggests just how passionate its filmmakers were in establishing the kind of legacy that fueled “Metropolis” or “2001: A Space Odyssey.”

Few achievements are made with such dedication, even fewer with the same level of foresight. It was born in the minds of two brilliant filmmakers known as the Wachowskis – Andy and Lana – who, after directing a successful crime thriller called “Bound” in 1996, purged head-first into drafting a sci-fi yarn about the illusions of reality. They spent nearly four years obsessing over details and storyboards like sculptors evolving a potential masterpiece, but their idea was seen as a gamble in the eyes of Warner Bros., which did not get behind the project until they were shown a completed opening sequence (the now-famous bullet time effect, first shown here, was also not wrapped within the often arrogant self-awareness that comes with inventive methodology). The movie’s eventual $60 million checkbook was seen as miniscule in context with the oversized resources of mainstream blockbusters, but a key decision to shoot much of the picture in Australia allowed for a financial freedom that gave birth to countless key experiments and technologies. Nowadays the endeavors of ambitious storytellers are made abundantly in the southern hemisphere, where risky films like the “Lord of the Rings” trilogy also were made to expand the possibilities of restricted budgets.

The movie plunges into its material full force from the very first moment, and the characters – both villainous and heroic – go beyond the core presence of their story. The lead is Neo (Keanu Reeves), a computer hacker who awakes one stormy night and finds his computer screen engaged in a silent dialogue with him. “The Matrix has you,” it enigmatically warns him. “Follow the White Rabbit.” What is the Matrix, exactly, other than a metaphor for some unseen force similar to Alice’s Wonderland? He knows nothing of the words, but the interior feelings match the unrest they cause. A computer programmer by day and hacker by night, the plodding double life of this quiet, unassuming loner seems destined for an unspoken shift when unknown faces and voices tap into his unrest – first at a club with the presence of a beautiful but hard-edged woman named Trinity (Carrie Anne Moss), and then later over the phone when Morpheus (Laurence Fishburne) seeks to set up an important meeting with him. In between these distant and puzzling interactions is the presence of a series of legal agents who seem to be in constant pursuit of Neo – but are they after him because of his life as a computer hacker, or for something else that he is yet to understand?

The central conflict: Neo’s life – and indeed, everyone else’s – is a complete lie, an illusion created by machines to imprison us in a cycle of manipulation and slavery. Think of yourself as living inside a virtual reality module, if you will. Much of this is revealed caustically through visuals, in which images framed from steep camera angles reveal the scarred remnants of an Earth that engaged in civil war with computers once their intelligence surpassed our own; now, under their rule, our bodies are wrapped in fetal cocoons, and then plugged into a system that generates power off of our imagined feelings and actions (the most haunting visual: the shot of a newborn being swallowed into the system). As striking as the images are, the dialogue by Morpheus – the movie’s historian, essentially – is delivered with muted enthusiasm; he explains the reality as if narrating a documentary, seemingly too exhausted from the facts to feign shock or awe.

Neo’s presence awakens new promise. Morpheus, believing he is the “one” foretold of in prophecies, grooms him for the sake of challenging the Matrix in an eventual war against their system. His colleagues, all unplugged misfits, stare at their new comrade at first with disdain, then wonder, then pessimism; is he really the savior they had been hoping for, or are they simply too tired from hiding in the shadows of the machines to give in to their doubts? The Trinity character, so skillfully played by then-newcomer Carrie Anne Moss, marches through the material with quiet assurance. Neo’s identity is a minor point to her, but it is crucial that she do anything possible to preserve him, just in case. The story requires the characters to juxtapose from the real world back into the Matrix for a variety of plot points – physical training, meeting up with a rebel program known as the Oracle, etc. – and on the inside the conflict is elevated by the presence of the “agents,” who act as guardians of the Matrix’s safety and will do anything possible to bring an end to the uprising created by Morpheus’ band of rebels. Key among them: Agent Smith (Hugo Weaving), who reminds us quickly that characters with human faces can be alarmingly ruthless when built from artificial intelligence.

What fueled the enthusiasm of the Wachowskis, we gather, came from just as many philosophical sources as cinematic ones; beneath the polished veneer of an action picture are nuances of intriguing reach that reveal themselves over periodic increments. Some of these were obvious after initial viewings – the name Morpheus, for instance, is extracted from Roman mythology, referring to the God of Dreams – while others, like the movie’s countless nods to biblical passages, were less obvious until time and frequent revisits allowed our minds to peer deeper. What all of this emphasizes now is that the film has ongoing value as a treasure trove of secrets that inspire dialogue and thought beyond the fundamentals of a story about rebellion, and its watershed representation of the awakened possibilities of the genre was so powerful in its day that it inspired two film follow-ups – “The Matrix Reloaded” and “The Matrix Revolutions” – in order to realize the unbound possibilities of the premise. The sequels were equal in measure when it came to capturing the sheer kinetic energy of the original, but today they lack the enduring subtlety and quietness of the first, and characters seem unrestrained in a conflict that hastily evolves into anarchy (my affection for them, nonetheless, persists; they are as enthusiastic and successful as the greatest of traditional Hollywood action pictures).

The originality of the structure is matched by visuals and narrative details that are quite obviously inspired by various unnamed resources (many of which, alas, were not so obvious to me in 1999). The idea of A.I. overthrowing humanity is a premise inspired by the works of Isaac Asimov, and the questioning nature of its characters reflects the sentiment of Phillip K. Dick’s heroes. The movie’s use of a vast cityscape to hide a deeper reality is, at its core, the most borrowed trait in all of science fiction, originating as far back as Fritz Lang’s masterpiece “Metropolis.” The rebellious nature of its characters echoes that of Ridley Scott’s “Blade Runner.” The photography by Bill Pope marries MTV-style editing (which he was known for) with an underlying sensibility of film noir. The fighting sequences are choreographed well, but Reeves directly calls Bruce Lee to mind with certain improvisations on the training mat. Exterior shots at night turned out to be staged on left over set pieces from Alex Proyas’ “Dark City.” And the sequence in which Neo first opens his real eyes to see the columns of flesh pods being used to fuel the machines is an obvious homage to H.R. Giger and the futuristic images of Japanese anime (most notably, “Akira” and “Full Metal Alchemist”). Film circles chastise the movie today for supposedly having the shameless nerve to borrow these resources without any sense of attribution, but to dismiss the movie on that argument would be simplifying the matter to a level that nearly all films of the last 30 years would fail to overcome. For a movie this dedicated to its cause, these are not rip-offs; they are pieces in an infrastructure of astonishing enthusiasm, and the film utilizes them out of honor rather than shame.

In reviewing “The Matrix” after its release, I wrote that “the movie jumps off the screen with its dazzling effects and compelling setup, to the point where multiple viewing are necessary to appreciate its artistic richness.” And so that remains true now, even as the industry’s desire to top the achievements of the past allows filmmakers to do much more with special effects at a fraction of the price. It was one of the great experiences of going to the movies in those early days as an aspiring movie critic, and watching it now, long after wisdom and experience has weathered the brain, the movie seems to whisper secrets that are content to casually reveal themselves over the grind of ages. A mind inspired to wonder relishes these opportunities. Somehow, one suspects that even Kubrick and Lang would have been marveled by this outcome.

To read the original review of "The Matrix" published by me in 1999, click here.