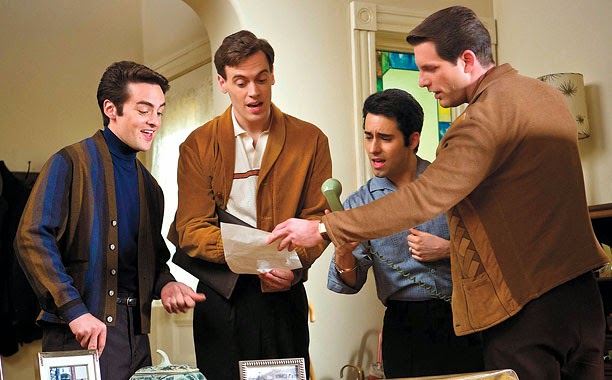 There’s narration in “Jersey Boys” that calls to mind the approach of “DeLovely” and “Beyond the Sea,” in which musical stars of the 50s and 60s possess hindsight in what will transpire in their eventful lives. Why exactly do those years call to mind a desire for writers to turn their characters into all-knowing observers in their own histories? Does relating the events through a modern perspective add something significant to the approach? A context, perhaps? For the four young men at the center of Eastwood’s newest movie, it is characteristic of a trend that suggests those times are now too distant for today’s audiences to relate. Here emerges a chronicle of young ambitious musicians who are just starting to find their place and write their legacy, but they speak directly to the camera as if stand-ins to “The Jersey Shore”; they are blatantly vulgar and contemporary, and driven by short-sighted indulgences. And yet their deliberate foresight also serves as some kind of elaborate warnings sign, a prolonged metaphor that seems to underscore the naivety of all aspiring stars in the age of artistic unrest. How unfortunate that the old adage “if only we knew then what we know now” doesn’t allow them to affect such details, even as they watch on fully knowing what fate has in store for them.

“Jersey Boys” is the story of Frankie Valli and the Four Seasons, a pop group of the early rock ‘n roll years that rose to fame for its distinctive sound and vocalization in the times of Elvis and the Beatles. What they brought to the radio waves is not necessarily a focal point of the premise, but the notion does add gravity to their internal disorder – because they were so talented and wrote several hit songs, the behind-the-scenes drama served to only make the fallout all the more tragic. It’s not exactly the stuff of a fresh perspective, though. Decades worth of film biographies about actors and musical personalities have provided fascinating insights into the lives of our treasured idols, but the buried reality of those stories is that they are usually grim and morose, and involve some level of tragedy at the end of the rainbow. A good one will occasionally turn those details into a biting commentary on celebrity. This is the kind of movie that aims to do such things, but with rather generic details leading the way.

It does, however, function as passable entertainment, essentially because of impeccable observations on the behavior patterns of its subjects. The film stars John Lloyd Young in the role of the celebrated Frankie Valli, who in 1951 was little more than a shy kid with a hidden gift being led through the trenches of musical evolution. The early scenes show him being passed around among friends like a lost schoolboy, and it’s a wonder that the influence of peers who break laws and rotate sentences in a local correctional facility do not unravel his drive. What makes Frankie so special, so conspicuous in this group of rebellious teenagers? His voice is an instrument that evokes something powerful, almost resonating; its high pitch is challenging and distinctive, and unlike anything one has heard on the radio. Those who absorb it do so with gleeful wonder, and there is even a scene in which a father figure (Christopher Walken) is so moved by his persuasive style that tears roll down his face. And that’s before radio DJs even get a shot at hearing it.

Soon, intentions are clear, and a band is formed. Frankie’s closest friend is Tommy DeVito (Vincent Piazza), a reckless and abrasive musician who sees so much possibility in his young friend that he would stop at nothing to catapult him to stardom – including, alas, activities that are less than reputable. Unfortunately, neither Frankie nor his other close consort, a vocalist named Nick (Michael Lomenda), are that eager to speak up about the dealings; because his drive is likely what will get them noticed, and because at the core Tommy is a loyal guy, they accept it as all part of the deal. But their progress towards superstardom eventually requires better networking potential, and when they decide to expand their little band to include a fourth (“because trios are dead”), they hire Bob Gaudio (Erich Bergen), who also writes insatiable radio hooks that will inevitably become a staple of the band’s successful sound.

Nightclub gigs pave the way for a recording contract (initially as backup singers), and then heated discussions with a flamboyant studio executive open doors for their own recording session. That endeavor yields “Sherry,” the first of many big hits that will establish them in the music business. Additional singles follow: “Walk Like a Man,” “Big Girls Don’t Cry,” and so on. Minor gigs evolve into television appearances on Ed Sullivan. Their songs start reaching pole positions on the singles charts. And then, at the height of their newfound success, in comes the opportunity to tour nationwide, and suddenly the days of mere hopes and aspirations are a full-fledged reality. Could there be anything now to unravel that momentum, much less undermine their passionate working relationships? The movie argues (accurately, I don’t dare wonder) that Tommy’s behind-the-scenes antics and dealings with loan sharks became the illusion at which the Four Seasons was founded on, ultimately resulting in a financial catastrophe that forced Frankie to spend years upon years touring in order to pay back the debt – sometimes with reformed versions of his band, sometimes solo. How depressing a reality that is, especially in conjunction with strained family relationships and tragedies that continually test his sanity over the course of the slow plodding decades.

As a vehicle for characters, “Jersey Boys” is remarkably observant. Here Eastwood has fashioned a film, based entirely off of a popular stage musical, with clear human intentions: each of these people has a voice that is critical to understanding the infrastructure of Valli’s professional world, and when unfortunate realities strike, they do so with a sense of seamless narrative plodding. Some details, like common chit-chatter amongst characters (or heated arguments, for that matter), are less about providing insights and more about highlighting the general world at which such people live. With a spotlight that demands sometimes rather drastic sacrifices, it’s a wonder that artists in the music industry make it as far as they do before succumbing to the taint of fame. The stars (particularly Young and Piazza) are fortunate that they occupy such roles; because they are relatively new and obscure faces, they walk in the shoes of their counterparts with a dual perspective that makes them more plausible than more seasoned actors would have been. And despite the fact that the movie is primarily about Valli’s own legacy as a vocalist and collapsing family man, each member of the Four Seasons comes equipped in the movie with a wide array of distinguishing characteristics. How often do we see movies about such subjects in which we can’t even remember the name of a bandmate, much less their individual significance?

On the other hand, the movie is not one of those profound or alarming revelations that have been known to emerge from this genre; it does not offer the demanding psychological subtext of “Sid & Nancy,” nor does it stare down at details with unflinching honesty like “What’s Love Got to do with it.” For the common viewer, the pitfalls of Frankie Valli and the Four Seasons may, indeed, be fairly innocuous, especially given the utter shock and horror that often accompanies the harshest of movie biographies. “Jersey Boys” simply seeks to expand on the notion that the early days of male singing groups were, yes, difficult uphill battles, and often disintegrated by the greed and stupidity of those within the infrastructures. But for anyone who ever loved the music of the Four Seasons, and perhaps for anyone who may be a sucker for a movie’s ability to perfectly identify the human condition of its characters, that will certainly be enough.

Drama/Biography (US); 2014; Rated R for language throughout; Running Time: 134 Minutes