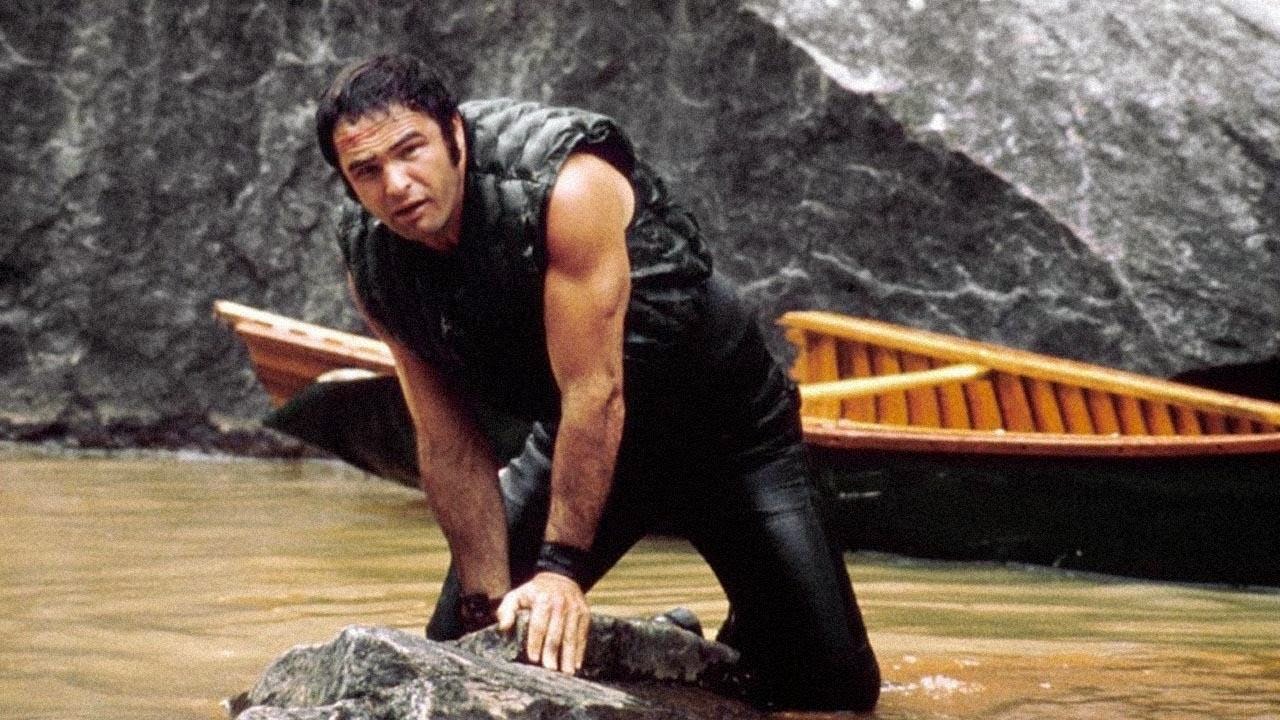 The premise is a simple marriage of unfortunate decisions that seem cliché from an informed perspective. Inspired by the popular novel by James Dickey (who also wrote the screenplay), four friends from Atlanta decide to venture into the deep reaches of the southern wilderness to go canoeing on the turbulent Cahulawassee River, a place that will ultimately be destroyed after the creation of a man-made lake going on nearby. The first scenes are all establishing shots intercut with the voices of uncertain buddies; though Lewis, the ringleader, finds eagerness in idea of extreme sporting out in the middle of nowhere, his three cohorts are either unconvinced by the idea, or merely novices in the practice. Their friendship diminishes those initial concerns though, and when the movie gets underway, all four of them have already wandered away from civilization like tourists on the hunt for treasure. What they find, mostly in gradual increments, is that the forest is also a haven for nightmares. The locals are hillbillies that stare through blank facades. The woods are so removed from human society that they carry an air of stagnation; it’s as if no living soul has wandered through the trees in centuries. And then, just as the foreboding sounds of wild animals in the wilderness start to die off, two lone figures from high in the mountain descend on the adventurers, and involve them in a moment of terrifying abuse. When one character observes early on that “There is something in the woods and the water that we lost in the city,” one must eventually marvel at the pointed irony of his optimism.

Because the actors in the four lead roles are all recognizable, this adds certain credibility to the material. The two focal points are Ed (Jon Voight) and Lewis (Burt Reynolds), friends who have been seasoned by a lifetime of mutual adventures. Ed participates in these excursions with certain detached reservation – mostly out of concern for the other two, Drew (Ronny Cox) and Bobby (Ned Beatty), who are clearly out of step with outdoor excursions – but Lewis, a nature enthusiast whose virility often overpowers others, possesses enough audacity to fill them all with needed confidence. Their earliest engagements are almost out of context with the formula; they laugh, exchange jokes, poke fun at the locals, and seem unbothered by the distance between them and civilization. And in the movie’s most famous sequence – a scene that has been referenced and lampooned more times than the movie itself – Drew engages in a spirited competition of dueling banjos with a young southern boy that seems to negate all indications of an impending danger (later, when the same kid stares down at them from a bridge above the river, his ominous expression serves as the film’s critical transition point).

Who are the villains that cause them so much pain and misery? To Dickey and Boorman, they aren’t so much lone culprits as they are the embodiment of a dying breed of backwater rednecks: unfathomable simpletons so removed from civilization that they know only of what their primitive nature has instilled on them. Their presence comes rather unexpected, too; when they arrived at the base of a mountain just as Ed and Bobby’s canoe pulls into the river embankment, the movie does not anticipate their arrival. Nor, for that matter, does it suggest what exactly they are capable of, and in the span of ten minutes their behavior results in things so utterly shocking we are left with no time to comprehend the outcome. That Boorman shoots these moments without soundtrack cues or flashy cuts is remarkable in the context of the subject. But the disquieting quality of “Deliverance” is that it has the gall to find restraint in a premise of horrific sensibility. Even as the minutes pass and situations weaken – resulting in injuries, tense pursuits and even death – there is no moment when the camera blares up its visual severity past the point of tangible realism. Here is a movie that finds contentment in showing the events without emphasizing them in technical dynamics, because the details themselves are potent enough to inspire all the necessary dread.

The subject of the movie was nothing new to Hollywood’s exploitation movement – or indeed, to foreign cinema – of that time. Just as the premise of innocent excursions inspiring unfortunate wrong turns ran rampant through the earliest of low-budget horror films of the 70s (“Last House on the Left” being one of the first notable successes), the underlying chaos of the wilderness served to propel the narratives of the great Werner Herzog, who used a similar idea that same year with his masterpiece “Aguirre, The Wrath of God.” But whereas Herzog was dead-pan in his lack of sympathy for characters who were in a collective state of despair, Boorman’s approach considers more direct truths: 1) the notion that all of this is happening in our own forgotten backyard; and 2) the emerging cynicism in the faces of his four protagonists, all of whom are simple guys brought to a complex atrocity that challenges their moral code. They are in resistance to the conflict not simply out of survival, either; because they are city boys who have been displaced from the comforts of an urban habitat, it serves to magnify their harrowing reality with a sense of silent paranoia (who else may be hiding in those mountains, after all?). And not once does the film flinch from the severity of their situation, either; the camera is unwavering in the bleak moments, and Dickey’s screenplay forces these characters to betray their civilized nature not because it’s in vogue with the story arc, but because it is the only choice that the wilderness has offered them.

When it comes to causing ripples through art forms, chaos is the beast which all craftsmen must be willing to tame. That Boorman, a relatively unknown director at the time, managed to do this without reducing himself or his movie to the cheap values of film exploitation is rather revealing about his skill (he would later use that chutzpah to fuel more lavish endeavors, including the magnificent “Excalibur”). Simultaneously, the success of “Deliverance” stimulated a trend that would literally weave its way through the hearts of all similar premises that came after, be they in horror films, thrillers or simple dramas. Was it prophetic in that regard? Maybe, but a more probing realization is this: it was the first mainstream movie to see the subject with pragmatism without surrounding it in optimistic illusions. Nowadays the concept is more or less a given; when one watches a picture that takes place within the sphere of the wild, audiences are programmed to expect anarchy. But beyond implications that have been eroded in the grind of time, what remains at the core here is a stirring, well-acted drama about people who earn our trust, carry us convincingly through their turmoil and then leave us in intricate moral clout when it is clear their misfortune will culminate in the reveal of very violent instincts. That it manages to find such undamaged qualities without the blatant overexposure of contemporary film also emphasizes how deeply dedicated both writer and director were in leaving us with an experience of extreme austerity.

Produced and Directed by John Boorman; Written by James Dickey, based on his novel