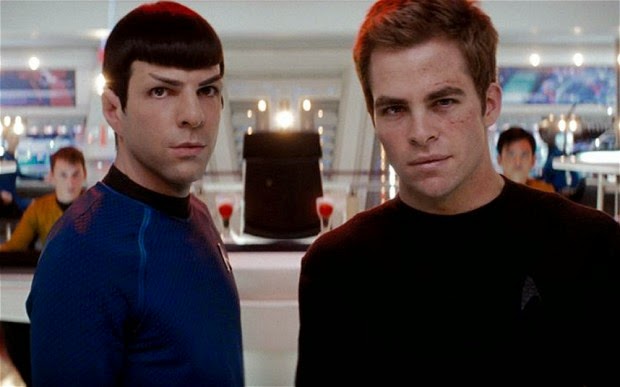 That is not a mainstream viewpoint. “Star Trek” would not have endured so consistently – nor would Roddenberry himself had found such immense success – had something critical in this story not tapped into the imaginative instincts of its audience. Understanding that mindset and leaving cynicism at the door, I approached the new “Star Trek” – a reboot by the talented J.J. Abrams – without preconceived notions. And then, after about an hour into the film, a funny thing happened: I found myself engaged by the material, and enjoying all the twists and turns that the plot was taking. Had that not been enough to inspire an impressed outlook, the visual style of the movie certainly would have been; as ambitious as the premise is, it’s within the special effects and production design that the real inspiration emerges, and here the filmmakers have made an endeavor that succeeds precisely in doing what so many attempts before it failed at: creating the feeling of a vast sense of space beyond the camera’s line of sight. And for the first time in all my encounters with the Enterprise and the Federation, I actually cared about several of those important figures seated at the ship controls, and interested in what they were going to do with all the decisions ahead of them.

Sometimes, especially in science fiction, it all starts with a noteworthy villain. “Star Trek” begins immediately with one of the more memorable of recent memory. His name is Nero (Eric Bana), and he is the last leader of an alien race known as the Romulans, who are on a journey across star systems to destroy thriving planets by creating black holes within their cores. Their motivation: in some distant future, Nero’s race has been destroyed by the Vulcan known as Spock, and his faction of survivors have ventured into the distant past in order to thwart the growth of their adversary before he becomes powerful enough to undertake certain genocide. That agenda does not initially bode so well for the inhabitants of the USS Kelvin; venturing through space on its own mission in the film’s early scenes, the ship is attacked by the Romulan vessel (known as the Narada), and is then destroyed in a last stand in which the brave George Kirk (Chris Hemsworth) sacrifices he and the Kelvin in order to thwart the Narada’s impending threat. It goes without saying (at least to the Star Trek lore aficionados) that George’s death occurs on the same day that his son, James Tiberius, is born into the world.

His is a name known almost as well as the series itself. Personified in the original television program (and six subsequent motion pictures) by the stone-faced bravado of William Shatner, James T. Kirk is celebrated amongst the Trekkies like some sort of colossal figure in the mythology of space heroes. To see him in this new “Star Trek” is to discover the face of a man at a very early age not yet weathered by the wisdom of space travel; played here by Chris Pine, he is a thrill-seeking adolescent whose knowledge (and ability) far exceeds that of others in his generation, but whose hot-headed passions (and an instinctual desire to challenge) suggest problematic endeavors in the impending war against the Romulans. At first little more than a rebellious kid driving cars off into large canyons, he is recruited by Pike (Bruce Greenwood) to join the Fleet which once housed his father. “You could be an officer in four years,” he announces with assurance. “You could have your own ship in eight.” Ah, but how likely is that for anyone so willfully resistant to dealing with the realities of others? The movie contrasts his stubborn demeanor with that of the calm (but persistent) Spock (Zachary Quinto), a half human/Vulcan who wrote a near-unbeatable exam for aspiring ship captains, and accuses Kirk of cheating after he becomes the first man to successfully pass those intense training tests.

The story arc is not so much a retelling of the Enterprise’s origins as it is a reflection of possibly alternate origins. Imagining this idea through lenses of ambitious audacity, Abrams crafts a film that doesn’t exactly look or feel like a traditional Star Trek endeavor – an impulse that, in many ways, conjures up the sensation of observing the rebirth of an idea previously relegated to dreary standards. Those out of step with the ways of the Starship Enterprise will be pleasantly satisfied with the outcome; the material exemplifies an enthusiasm that is a rarity (especially for premises this familiar), and the screenplay by Roberto Orci and Alex Kurtzman takes otherwise mundane plot points and provides them an underlying character-driven subtext that makes details much more intriguing than they probably have the right to be. The movie also dances wisely between potential narrative anomalies by tying timelines together, and in the film’s greatest plot point, a displaced Kirk is visited by the elder Spock (Leonard Nimoy), who has travelled from his own time in order to assist in thwarting the bloodlust of his sworn enemies. Nimoy’s inclusion does not reek of that dubious nerve to offer a cameo to veteran series actors, either; here, his wise (but rattled) demeanor is an effective link between both universes, and perfectly balanced by dialogue that does not resort to overwrought explanations as to why such events have brought each of them to this critical juncture.

If the movie does not warrant a higher rating than the standard three stars, however, it is because Star Trek is, in any form, limited to inspiring only so much excitement in eyes and ears that have absorbed nearly all possible facets of the promise of Science Fiction. While the technical prowess of the film is certainly in a class of its own (the cinematography is patient and cautious around intricate special effects shots, while the production design creates a sense of overwhelming detail from within the interiors of these powerful space vessels), there are few stories that can be told about the Enterprise (or its inhabitants) that resonate beyond a momentary thrill; as dynamic as the war between the Federation and the Romulans is for the duration of the movie’s 127-minute running time, one is left with the sense that this all, in any regard, is about living within the moment rather than leaving behind some kind of lasting impression. Perhaps that was always inevitable with an action-oriented filmmaker like Abrams in the director’s chair; previously at the helm of several television shows (including “Lost” and “Alias”), he is also accustomed to the language of a medium that requires the bulk of thoughts to be wrapped up in brief passages, and his approach is indicative of a man who enjoys getting between points with minimal fuss. The legacy of Star Trek, however, may come down to the fact that it does not live and die by such a fleeting impulse. Can a movie ever really be made about these characters that matches the zeal of the action with a premise of stirring creativity? That remains to be seen. But when it comes to spending an afternoon aboard an Enterprise with dreary middle-aged line-readers or movement-driven adolescents, I’ll gladly sit amongst those who still possess their youthful passions.