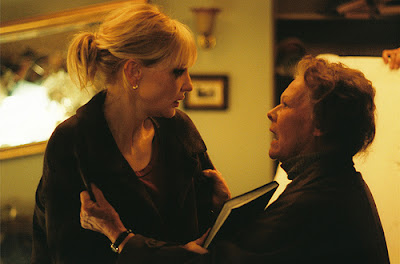 Her name is Sheba Hart (Cate Blanchett), and Barbara comes to see her as more than just a “Whispy Novice” – namely, as an attractive and loving confidant whose liberated nature is as alluring as it is infectious. At first weary of their interactions, the aged teacher thinks through cynical lenses; when they fall, we sense that her gleeful smiles are the first she has experienced in years, perhaps decades. Sheba smiles an awful lot too, perhaps because their friendship plays like such an obvious blip on a radar soaked in uncertainty, nervousness and dejection. We can easily buy into that transition for the younger of the two, but what is the driving force of Barbara’s sudden shift in demeanor? The movie argues (albeit very quietly) that she has a lesbian crush, but I think the reality is much broader than that; they are two women unhappy in their lives who come to recognize that each has the same immediate needs, and who’s to say what orientation anyone has to be for such interactions to proceed so intently?

The problem is that Sheba’s needs run much deeper than mere female companionship, and against all the responsibility that comes with her rather taxing home life (and older husband, a sarcastic teenage daughter and a special needs son) she silently seeks something more, something forbidden. Insecure and overwhelmed in the classroom, one of her young students – a smarmy Steven (Andrew Simpson) – takes a rather unhealthy liking to her. He acquires her attention by being a skilled artist, creating an impulse in her to spend extra time educating him. Those sessions play like the precursor to more dangerous interactions, intercut with personal confessions and sly flirtation that set the stage for a very dangerous affair between student and instructor. Barbara catches wind of their trysts early on, but doesn’t mix her demands with threats; she insists that the secret is safe with her, provided that Sheba stop what she is doing before it is too late. But as always in the cases where feelings mix up the practicality of adult responsibility, how far could we trust either woman in making effective decisions?

“Notes on a Scandal” is basically a soap opera masquerading around as an urgent social drama ripped from today’s headlines, but it isn’t a cheap grab for attention like so many have been through the years. That comes down to the seriousness of the film’s conviction as well as the credibility of the acting, two facets that tend to be lifted from the doldrums of campiness when in the hands of those less perceptive with the material.  But the talented Richard Eyre, who also made the brilliant “Stage Beauty” and the heartbreaking “Iris,” sees something more thoughtful here than just a controversy in time. The movie is first and foremost about people who don’t know how to handle the obligation they are given, because to do so would have required them to live the sorts of lives that wouldn’t have reduced them to shells of loneliness and pessimism. It’s not so shocking to us to have a teacher sleep with her student (an abundant thing in today’s odd world, sadly); it is more intriguing to see how those who might know such things choose to deal with it, especially when they remove themselves from the charge of logic.

Those tend to be stretching prospects for many actors, but here is a movie gifted with no less than three abled thespians who are more than up to the challenge: the regal Judi Dench, the unassuming Bill Nighy and the highly adaptable Cate Blanchett. Each of them holds space in Eyre’s tense plot with certain command of their inadequacies; they are flawed and brash but stubborn to that conviction down to the final blow. Blanchett, often mesmerizing, makes for a compelling Sheba – not sympathetic, mind you, but plausible in her narrow distinction, and driven by an impulse of passion that seems to create a context for her dangerous decisions (at least to her). As the smart but aloof husband in this mix, Nighy does an astounding job of conveying the all-around ambivalence of his character’s existence, all while modulating his style to a pinnacle moment when he must make a stand against his wife’s infidelity, rather dramatically. And Dench, even in this framework, goes above and beyond the call of her characterization, creating a thorough portrait of a woman who is, yes, cynical and disparaging to her rotten core, but made so by circumstances that seem to cast continuous shadows even in her more sincere moments.

There is an awful lot of dialogue in “Notes on a Scandal” that is strategic in suggesting those prospects, but Patrick Marber’s script – based on a novel about a real life case, of course – does not bog us down in the sorts of details that are more intriguing to opportunistic journalists. Sure, there are crimes aplenty occurring on screen when Sheba does something so unthinkable. Sure, her dear friend Barbara’s reasoning for holding onto – and then exposing – that secret is frothing with ulterior motives. But the strength of the writing, and therefore the directing, is that it sees the scandal as a minor point in a human experience that is naturally corrupt, and cares more about how those on the inside choose to deal with their realities. It is as unflattering and raw as character studies come. And yet against the grain of standards that implies such material must play as an over-the-top warning against the actions of horny schoolteachers preying on innocent students, no one involved is led astray from the movie’s more straightforward motives. Furthermore, it boldly refuses to paint the details in direct accusations – a fact that perhaps might turn off the exact sorts of viewers going in expecting yet another callow yarn about dimwitted sorts exercising harmful temptations with black and white results. How audacious is it to discover that a movie like this, for example, has the inclination to assume that a teacher only shares in the blame for having sex with a teenager? Really, doesn’t a young boy know exactly what he is doing when pursuing sex with someone like that? Sometimes the hardest pills to swallow are the same ones that are essential to understanding such divisive personal decisions.

Produced by Robert Fox, Redmond Morris and Scott Rudin; Directed by Richard Eyre; Written by Patrick Marber; based on the novel “What Was She Thinking: Notes on a Scandal” by Zoe Heller