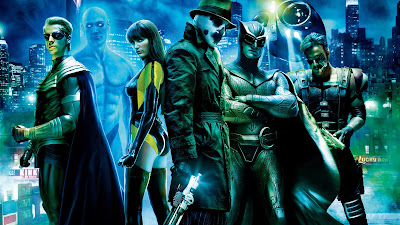 A great burden rests at their feet: the realization that mankind is gradually moving its way towards the cliff of mortal endurance. As the American government wages quiet political warfare with the Soviet Union, civilization is gripped by the prospects of nuclear destruction, and the Watchmen – previously disbanded by a plethora of new stringent laws – regard the scenario with varying degrees of pathos, regret, anger and even violence. None, save for the great blue wonder, are made by anything more than elaborate disguises and earthly skills. The narrator is Rorschach (Jackie Earle Haley), a loner who still wears his mask and is essential in setting the tone’s bleak groundwork: “the streets are extended gutters and the gutters are full of blood,” he says. “And when the drains scab over, all the vermin will drown.”

What brings them all out of their isolation is the death of one of their own: the “Comedian” (Jeffrey Dean Morgan), a stubborn and cynical bloke whose personality was an ironic projection against the mantra of superhero code. To him, there was little point in saving a populace when they were so eagerly at destroying themselves. In the early scenes he is attacked in his upstairs apartment and thrown out of a window, which gives way to the most significant symbol in the movie: a shot of a happy face button dripping in blood. The pin is the label of the Watchmen, who once were the primary defense against a world eating itself alive in the throngs of crime and chaos. But what happened to the wonder they inspired, the hope the instilled in others? All that remains is their remnants, a collection of men and women attempting to find a role in life that doesn’t involve standing behind a mask or elaborate gadgets hoping to preserve the illusion of peace. Some, like Dan Dreiberg (Patrick Wilson), do a fairly respectable job at faking their way through those motions. Others, like the vastly intelligent Adrian Veidt (Matthew Goode), have used such a position to worldly perseverance; he stands proudly above the rubble of the establishment like some kind of cruel spokesperson in a cartoon infomercial.

The plot involving Rorschach’s endeavors to unite these comrades in order to solve the mystery of the Comedian’s murder seems to imply greater implications: was the act simply a minor coincidence, or was it a piece of a bigger political puzzle linked to the conflict going on between the Soviets and the Americans? Though they no longer stand defiant against a world of unrelenting crime, does the mere existence of the Watchmen – not to mention the endurance an all-knowing power standing behind them – threaten the progress of these realities? The perceptive dialogue plays like a deep consideration of the material rather than an urgent force pushing against it, and that means we are not always in store for the sorts of conventional action scenes that populate a superhero endeavor. Based on a graphic novel that many consider the finest ever written, the narrative has ulterior agendas too elaborate to reduce to mere images; they require some level of thinking beyond the knee-jerk implications of mystery or danger, and sometimes there are spaces where little is going on other than passive interactions or morose observations.

The movie is also thick on exposition, which is a necessity: because the fate of the world essentially rests in the hands of characters that must connect the loose ends, dealing with them requires the insight of a past heavy on relatable details. Some of the best involve the backstory of the Comedian and the first Silk Spectre; if he was a predator who attempted once to rape her, why does she speak fondly of him in old age when asked? What ramifications does this have on Laurie (Malin Akerman), her daughter, who took over the Spectre’s mantra when she joined years later? And how does that affect her relationship with Manhattan, whom she loved long before his cosmic transformation detached him from the human condition?

The parallel universe within “Watchmen” is more cynical projection of our own, but it also takes great strides in moving the cultural paradigm towards the obverse of its own trajectory. Consider these details closely: The year is 1985, and Richard Nixon remains president because the Vietnam War was won thanks to the intervention of Dr. Manhattan. The political landscape of American democracy has drastically altered the course of the social climate (not always for the greater good). What the movie also must deal with is the daunting task of connecting those realities to the near-absurd concept of masked crusaders wandering among common citizens, which seems jarring even here. How would our reality look if, say, Superman were as real as Michael Jackson? Few movies have found plausible solutions in dealing with that idea (although others have certainly come close, including Nolan’s “Batman” films).

The fundamental difference, I believe, is that they lack mystique and celebrity, whereas a Dark Knight or a Wonder Woman would inspire awe in onlookers because they are glaring contrasts. Those who once took up the mantle of protecting innocent civilians are seen here as little more than officers of the law in much more elaborate masquerade. And with that comes the acknowledgment that all of them have divisive (and human) agendas: some dedicated to the cause of protecting others, some caught up the fame, others even ambivalent to the calling. And then there is poor angry Rorschach, a byproduct of the same underbelly he has fought against: underneath all the snarls and violence is a man eager to find the truth, even if it means slaughtering all the sinners on his way to the answer.

The irony of Zack Snyder’s undertaking is that it feels unlike a fantasy, despite the dexterity of the visuals. There are even moments that defy that perception, including a sequence that takes place on the surface of Mars, and another during the climax in an underground bunker in the Arctic. But others are simply distinctive based on how they weave one reality with another (i.e., a shot of a masked hero at the sight of the Kennedy assassination), and his use of this approach is, one might argue, congruent with more underlying agendas of the comic book artists, who no doubt saw those images as a way to color the blurred edges of the reality rather than to displace us from them. None of this would be as effective – or indeed, as profound – if it weren’t possible to sense the plausibility of this world, or at least some human connection to it. The cinematography by Larry Fond, one of Snyder’s long-standing technical partners, is so fluid with this transition that he doesn’t waste time thinking of the awe of the moment. For him, the integrations simply exist for the purpose of implication, not for inspiring wonder.

And yet Dr. Manhattan, a sight unlike any I can recall, exists almost in defiance of that concept. That is as key to the film as the performance of Billy Crudup himself, who has the daunting challenge of defining two opposing facets: one of a kindly doctor before the transition, and another of a being whose behavior has been reformed in the long timeless pattern of the cosmos. It is as alluring as it is remarkable to sense the intricacy of his portrayal, which exceeds simple personification and finds comfort in the upper tiers of sublime performance. But of course his co-stars do more than just submit to the will of his overpowering presence, they possess their own edge. Wilson, often seen playing the suspicious gazer in dramas and horror films, does great work as a computer and science enthusiast with uncertain social skills, and Malin Akerman plays the Silk Spectre more as a lost romantic rather than a menacing vixen; when her eye gradually wanders away from Manhattan and towards Dan, it doesn’t seem like a move towards sensationalizing the relationships. And Jackie Earle Haley, whose career was built on offbeat character portrayals, makes Rorschach into a voice of wisdom that pierces through common sense at arrives at the center of cold reality. Our eyes never leave his gaze.

If the humans in the edges look to the Watchmen without the sense of celebrity that normally taints the reputation of superheroes, it’s because they belong to that frenetic world of 21st century hindsight, in which people are less impressed by physical power and more concerned about being a bystander in their destructive pushes for world safety. Snyder himself has dealt directly with these themes consistently since “Watchmen,” overseeing both “Man of Steel” and even the more recent “Batman v Superman,” about people who have come to look at the fabled heroes as liabilities in a sweeping financial disaster in flattened cities. Those movies lack the sharp writing of “Watchmen,” but moreso than that also neglect to think about the situations beyond a moment that must lead to yet another chase or action sequence. Those are, by the measures of more transparent plots, shameless gimmicks to inspire the hero into showing off. The protagonists of this film no longer have the hope to save a world swiftly unravelling, and their goals are as dissonant as they are singular. And with Manhattan there watching on, off in a distance like an astral projection, his wisdom expands on the idea of a pessimistic undercurrent and allows us to contemplate our relative insignificance among the stars. If this ship is indeed destined to sink, one ought to be able to swim long enough to find out why it treads water in the first place.