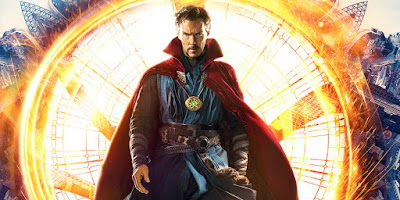 There is a wide array of sensations one is apt to experience while watching the new “Doctor Strange,” but the most inexplicable of the arsenal is an unflinching sense of plausibility – the idea that something so seemingly absurd or above the trajectory of audience absorption can feel so thoroughly believable when spied through zealous camera lenses. A basic reading of a plot synopsis certainly contradicts that assumption, and no wonder: the story, about a brilliant doctor who is crippled in an accident, goes on a mystical retreat, discovers astral projection and literally learns how to bend time seems like nothing more than self-indulgent fantasy. But Scott Derrickson, the motivated filmmaker behind Hollywood’s latest excursion into the pages of colorful comic books, takes an approach far more cognizant than most others would, and what emerges on screen far exceeds the cynical expectations of what we routinely offer this genre. Certainly the details have a familiar air to them – the visuals echo “Inception,” the premise recalls elements of “Batman Begins” and the characters are reminiscent of those contained in “The Matrix”, for example – but so infrequently do such things come together in the service of such an engrossing story, much less a mere suggestion of intrigue.

To expect anything more than passable entertainment from the likes of Marvel these days is to assume an assembly line might belch out a diamond. For every “Guardians of the Galaxy” – in itself the best of this recent breed of adventures – there are two or three mediocre pushes that wear the polish of a first-rate blockbuster. But “Doctor Strange” is a film far more rich, entertaining and intellectual than the promotional trail of glitzy images and ambitious visual effects would have you believe. And at the tip of that impressive iceberg is a performance by a man who sees himself not as a conductor of action-oriented heroism, but as an avatar for rather profound underlying philosophies. What do they consist of? Among them is the tipping point of what the more important comic franchises have been crawling towards in the recent years: subconscious recognitions of a universe of dangers that are cruel and passive, and eager to silence the antics of a human race that knows only how to think in transient ways (or with aggressive sarcasm).

That is not to say this adaptation is absent of perfunctory nods of humor throughout the 115-minute running time, but rarely are they used in service of lighthearted consistency; the moments function more as escapes from doom or uncertainty rather than tools of tonal balance. The plot – like most origins – operates as it must: the hero (Cumberbatch) is a skilled and treasured asset in his chosen world (the medical profession) when a life-altering event (a car accident) removes him from what he loves doing the most, thus placing him at the mercy of self-loathing and insecurity. The obligatory love interest (Christine, a nurse played by Rachel McAdams) shows nothing but compassion and encouragement, but rarely are those virtues met with gratitude; he frequently launches into verbal cynicism, and the inability to recover from nerve damage in his hands only propels the resentment towards abusive outbursts that drive away his loved ones. But then, in a pivotal moment of hopeless wallowing, word reaches his ear of a remarkable case of physical recovery originating in Kathmandu, putting far-fetched hopes in his line of sight as a means of cauterizing momentary self-pity.

What is actually going on there, he finds out, is far more profound than a mere situation of logic or physics; contradicting his study of the human body, Stephen Strange meets a fascinating being known as the “Ancient One” (Tilda Swinton), who suggests that recovery is part of a process of opening one’s mind to other arts – namely, abilities buried within the brain that allow an individual to exist beyond the basic scope of space and time. The movie exemplifies this reality cleverly in a scene in which Strange’s spirit is briefly separated from his body and allowed to act independently, but of course his epiphany comes out as a sardonic plea. That leads to inevitable resistance from the order to train him in regards to any of their mystical ways, especially early on; he shows a resistance to adapting to formal training, and is often left frustrated by an inability to comprehend very simple incantations. But patience – and abandonment of self-made pride – eventually leads him down roads of resonating metaphysical discoveries, and one of the film’s running gags (if you can call it one) is that Strange is always trying to skip steps in his education by sneaking forbidden books out from the library under the nose of its suspicious librarian (Benedict Wong).

The secrets of those books is less a direct pursuit and more an impulse of unflinching curiosity, and to him these new spiritual discoveries represent a risky alteration to the fabric of his universe that he stubbornly questions – even though the journey could potentially lead him to full physical recovery. He pushes on, perhaps, also because it fascinates him just as deeply as it does the audience. There are probing glimpses into other worlds, physical duels and litmus tests that operate on a level of complicated sorcery, and even ambitious confrontations with a vengeful villain named Kaecillius (Mads Mikkelsen), who meanders through much of the material as the obligatory threat against the order of the universe. What it comes down to, ultimately, is that the prophet’s mystical order of warriors must protect Earth from unseen invasions by beings from alternate dimensions of existence, and what she sees in Strange is a conduit for the purest of those energies. That doesn’t necessarily make him a “chosen” sort like the protagonist of the “Matrix” series, but one doubts that monks involved in sorcery waste their time contemplating Messiah-like statuses, either.

The overreaching arc of Derrickson’s endeavor creates a rather startling mythology surrounding these circumstances, a world where gaps in logic are explained in riveting detail and visuals bounce off the screen in a rapid stampede of aesthetic distinction. There was no limit to how intrigued I felt watching some of the specifics fall into place, including a visualization of the “mirror” – an alternate reality in which dangerous mystics can be imprisoned, and physical reality itself can be manipulated as if it were part of an elaborate computer simulator – and fight scenes within a monastery where characters seem to exchange blows at alternating speeds, all while they are rendered weightless by their knowledge of the magic. There is also a brilliant sequence dropped in the middle of one such moment where Strange’s spirit form oversees a medical procedure involving his own body, and he is chased by one of Kaecillius’ henchmen just as Christine watches on with hopeless confusion; there is both alarming complexity to this moment and a sense of liberating clarity, a rarity in a genre where specifics are often muddled behind the confusion of chaotic passages.

It’s not as if “Doctor Strange” is without the sorts of holdbacks – the finale, which takes place within an alternate dimension, is a convoluted mess – but the movie holds itself down so well in a streak of confident impulses that the quibbles are easily dismissed. When I first wrote about “Guardians of the Galaxy” two years ago, I remarked that it was the first comic book-inspired action epic that showed me things I had never seen before – a rare quality in times of Xeroxed intentions and derivative inspiration. Silently, that standard has become my measuring stick for the Marvel universe, and in some cases that test has taken me through the maze of insufferable simplicity. Here is a rather surprising movie that recalls the great traditions of the earliest comic book artists, who were far more interested in creating thoroughly original concepts before filling them with all of the obligatory staples of a superhero yarn.