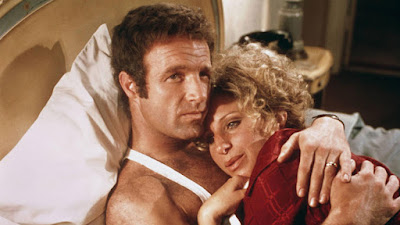 “Funny Lady” tells of the later years of that same performer, one of the most notable stage presences of the industrial age, who rose to fame for her voice and comedic timing and then eventually reinvented herself into an icon of musical theater and radio. The exploits of her rise were on full display in a well-known star vehicle for the gifted Barbra Streisand, but then came the inevitability of a sequel to take the notions a step further, maybe for no other sake than to revisit the golden virtues of its primary star. That she owns a screen even when the quality of the direction is in question says something remarkable about her screen prowess, and indeed the pitch-perfect pairing of she and James Caan as the impassioned songwriter certifies this as a noble endeavor. Will that be enough to offset the drawbacks of such an inferior narrative, however? At one point my views on the matter would rarely consider this in a notable light; as age has eroded my patience and I sense more the underlying causes of one’s cynicism, Fanny Brice’s gloomy later life seems less dreary and more in line with the reality of growing old in such an ageist industry.

The movie begins just as the previous ended: with Fanny, ever-so-convincing as an uproarious stage performer, bouncing back and forth between performances and anxiously downtrodden backstage encounters. The reality is sullen: yellow roses arrive in her dressing room – a frequent gesture of her former lover’s affection – except now they come attached with a divorce decree, inspiring a moment of silent pain that must inevitably draw her towards pessimism. You will recall, hopefully, that the end of “Funny Girl” suggested an irreversible separation between Fanny and her husband, Nick Arnstein, after he was sentenced to a prison term for selling phony bonds. But now the reality has reached her doorstep just as the fate of her career is thrust into uncertainty, especially as the stock market shows signs of an impending crash towards the end of the 20s and calls for new jobs are an elusive commodity. Few people of her nature would have been willing to face the day, much less do it with a force as biting as it is goal-driven.

Enter Billy Rose (Caan), a songwriter with a persistent – if naïve – bedside manner who wanders into the room and makes himself known to those who would normally see him in periphery. Fanny is strangely drawn to his energy. He, a fresh face with eyes full of wonder, is enamored by the idea of being near the greatest singer of her time. But when it becomes clear that their jarring allure will thrust them into unlikely collaboration, neither seems prepared to deal with the volatile working conditions that will result from such conflicting personalities. There is a smart sequence in which Fanny and Billy are shown at the recording studio as she lays down vocals for one of his treasured songs, and their banter indicates an annoyance that will foreshadow their encounters – including the centerpiece of the plot, involving a lavish stage production that Rose is far too incompetent to pull off without honest insight from the star he hopes to lure.

The movie shows these antics as a work-in-progress across a plethora of badly-staged musical numbers and misconceived performance decisions. A good many of them are perhaps too calculated in their incompetence, as if Ross allows his actors to be self-aware of the disaster of the moment; when Streisand sings a song while standing on a gigantic cigarette, for example, her face seems like an echo chamber for the mishaps he hopes to harvest rather than a moment that ought to inspire embarrassment or dislike. They serve the purpose, at least, of creating scenarios for Rose and Brice to come to blows over, which is what this plot relies on for its strength. The best of those scenes involves an outburst backstage that culminates with the tossing of talcum powder after Rose makes a move on her (reportedly, Streisand was too concerned with health ramifications to be willing to shoot the scene more than once). To observe the climax of that moment is to see the bravado both leads bring to this interaction, a certifiably candid display of explosive emotions that create a deep and enduring respect rather than a dramatic fallout of will.

I didn’t always sense that detail about their collusion, though Streisand herself certainly assisted in clarifying that possibility. During a key moment of a concert I attended in August of last year, the subject of “Funny Lady” weighed heavily in her late consideration of Fanny Brice; to her, the idea that her famous idol was “in like” with Billy Rose rather than “in love” with him might have given her prose to accept him as the man he was rather than as the image she romanticized. By the same token, perhaps Rose offered Brice a chance to freely exist in the comforts of her own person, a luxury that might have been too distant a thought during her years with Arnstein. If those suggestions are meant to be taken back with us as we consider the movie now, then the final act – in which Fanny gradually allows the image of perfect love to erode – contains some of the most confident and unforgettable moments of Streisand’s mystique.

How any of this is possible at all in a film that is generally conceived in shapeless and haphazard increments is a wonder at all. Both stars are strong together, no doubt, because they have few others to rely on, but that’s the smallest of the movie’s grandiose offenses. The scenes have little rhythm or consistency to connect them, and one never knows whether to expect a musical number or a showy verbal tirade. When the characters do take space on a performance stage, the camera shoots them in angles too low to grasp their power – a distinct contradiction from “Funny Girl,” where even the off-stage numbers were given life by the broad pull-back of an anxious cameraman. And though the stars can convince us that they do enjoy their time together, one wonders if the screenplay by Jay Presson Allen and Arnold Schulman doesn’t create too many far-fetched scenarios for them to capitalize on. Are we expected to believe that they are going to have such heated arguments over the inclusion of zoo animals in a stage show? Or that they are going to go to the trouble of sleepwalking through a wedding reception where neither seems to notice that the other one is present? “Funny Lady” is a strange anomaly of a film that rarely works and often bores to the point of exhaustion, but how thrilling that a pair of committed actors can pay their own amusement forward in a synergy that defies most traditional outcomes.