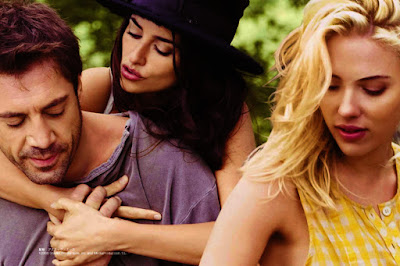 What occurs to the primary observers throughout his film fits no mold of any conventional romantic comedy, nor does it amount to the same strange destinies of the more probing sexual dramas of Bernardo Bertolucci or Mike Nichols. Here is a story in which perceptions are challenged, expanded, discussed ad nauseum, meditated on and allowed to evolve among stars who have pitch perfect chemistry – both with each other as well as with the camera that intrudes on their encounters. I was not so much focused on the unexpected events as I was bathing in the distinctive spin that carried them from one sensation to the next. And never once was I questioning the motives of the director, either, which may surprise some; after Allen has spent a sizable time of his prolific career doing everything in his power to prod every last one of my nerves, now comes a picture that negates many of those eye rolls and uncomfortable chuckles. “Vicki Cristina Barcelona” isn’t merely a good film, it is the literal shattering of a lifelong distorted perception.

What inspires this distinction, exactly? Are his ideas not orchestrated in the same vain as any number of his successful comedies from the past? The key comes down to the way he assembles all the pieces. The film stars Rebecca Hall and Scarlett Johansson as the Vicky and Cristina, a pair of women who have taken a trip to Spain to soak up some culture on the eve of Vicky’s wedding to Doug (Chris Messina), a straight-laced sort who occupies others by always being insufferably agreeable. Of course his fiancée – inexperienced outside of her core relationship – adores that prospect, though something stirs within when she and her more laid-back best friend are approached by a local painter (Javier Bardem), who offers them a weekend in Oviedo of sightseeing and lovemaking. Cristina’s attraction is obvious, her response a balance of fascination and enjoyment. Her companion, far more uptight about his forwardness, rebuffs the advance (at least initially). Then there is a precious dialogue exchange between them that harkens one back to the interactions of a number of Allen’s earliest comedies, in which sparks are seen flying during moments when characters appear totally bothered by one another’s forwardness.

Yet what you see in those moments is less reflective of old glories and more indicative of a new composure that seems to inflict a lot of his newest endeavors, in which characters are seen engaging in discussions that test the limits of their deadening comforts. The difference in this case, perhaps, is that we see them occurring to people who are genuinely interesting. Think about the Bardem character, for example. The first time he is seen on camera, both girls are viewed exchanging gossip in hushed voices about the handsome figure lurking among party guests at an art show. Later, when his frank demeanor presents itself during a public encounter, it doesn’t serve to fuel an image of predatory instinct; he is calm and collected, and smooth in the way he skips past greeting card formalities. Even Vicky’s pessimism is quickly disarmed by that sense of charm, leading to a scene in which their mutual attraction erupts in a moment of sexual release that alters the very trajectory of her thoughts – it has to, otherwise what is the point of both filmmakers’ alert heroines being present at all?

Complexities overtake them. Plagued with self-doubt, Vicky proceeds with her marriage after her one-night with the tortured painter, and finds commonality with a friend named Judy (Patricia Clarkson), who acts as a framing device of what it might be like to live for decades in a loveless marriage. Meanwhile, Cristina and Juan Antonio partake in the joyous early stages of a blossoming romance, until it faces new uncertainty after his fiery ex-wife Maria (Penelope Cruz) shows up following an attempted suicide. Does Cristina have a right to be concerned by the renewed presence of Juan’s greatest love? Their early encounters ought to suggest so; she and Juan Carlos possess all the spit and vigor of some of the more legendary movie relationships (some of the dialogue mirrors the tone of “Who’s Afraid of Virginia Woolf?”), and Maria is hardly quiet about her initial disdain for this strange new woman in her former husband’s life. But then an interesting thing occurs: the three of them become intertwined in a three-way romance full of art, passion and respect. It isn’t sudden or burdened by gimmick; their exchanges have a lighthearted honesty that arises naturally, giving us the sense that their relationships are an act of inevitability based on how thoroughly their quirks complete one another.

The selling point in this unlikely turn of events is that we enjoy watching these people learn and react, not that it might all inspire some classic awkward screwball sensations (of which there are some obligatory points of interest). The actors, furthermore, are pitching at a high caliber of intellectual stimulation. Hall is astute as a focused woman who now suddenly questions everything after a chance encounter, and the lovely Scarlett Johansson is likable as an innocent face swept up in the liberating experiences of a three-way love affair. Bardem has a great deal of fun maneuvering around the verbal traps of the women that dot his complicated life, and Penelope Cruz as the disgruntled-wife-turned-tranquil-lover is on point in nearly every scene she possesses the screen. Good actors have no dilemma showing up in the middle of any number of Allen’s notable films, but rare is the occasion that they are all seen working towards the same common goal; this is an interesting idea full of great possibility, and not once do they back down from capitalizing on the fascinating depth of their romantic dilemmas.

The one drawback – as it usually is in the director’s undertakings – is that much of what occurs here is narrated off-screen by an unknown male voice, who feels the need to explain the silent moral ramifications of his characters as if they are not transparent. Some, perhaps, could get away with that when their themes are vague or misleading, but Woody Allen is rarely a filmmaker who deviates from his own point. What, then, is the relevance of it here? Are his audiences not already well-versed in the mechanics of his players or the dual insights of their intellectual dialogue? The utilization of voiceover plays as an unnecessary simplification of the obvious. Does he have it there to remove the burden of a viewer losing their place among a rapid-fire series of exchanges? One can’t exactly be sure. But it is also easy to separate the gimmick from the material that is occurring around it, too. As I moved through “Vicki Cristina Barcelona,” I was just as much of a cynic as I was an observer, and at nearly every interval there came an expectation of the material unravelling dramatically. But that moment never came, because Allen never backs down; here he kept his pitching arm in full form until the very final frames, where the girls shoot each other silent gazes of confusion after their strange vacation. Love is not such a many splendored thing when it involves the chance of convoluted encounters, but those that who can walk away unbroken by the experience are the sorts many of us would thrive at keeping company with.