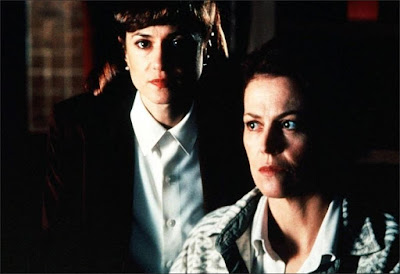 There is an ideological disconnect between those who study serial killers and those who are assigned to prosecute them. For the latter sorts it’s all about procedure, about connecting dots in a maze of riddles to identify a source that can be seen, touched and ultimately punished. Anything beyond those mechanics fall to deeper thinkers, who inhabit the underlying psyche as a means to find answers to the more probing questions – namely, what drives a person to the methodical precision of committing murder on a mass scale? “Copycat,” a thriller that borrows much of its structure from “The Silence of the Lambs,” features two such characters at the forefront of this descent. One is a psychologist specializing in serial homicide played by Sigourney Weaver, the other a deadpan police inspector played by Holly Hunter. Both lack the patience to work cooperatively with the other, and yet somehow they must, otherwise a recent surge of murders in the San Francisco area mimicking those of famous serial minds from the recent past could continue without interruption, even though they might be occurring with a critical pattern between them.

Helen Hudson (Weaver) senses this distinction amidst a battle with personal demons. After suffering a mental breakdown following a near-fatal confrontation with one of her subjects a year prior, the agoraphobic psychologist observes these new and frightening consequences from what she feels is a safe distance. But others see her as a nuisance and a loon, emphasized in the early scenes when she places a phone call to police to ask key questions about their impending investigation. Inspector Monahan (Hunter) would normally follow suit, except that she is alarmed by the impeccable detail – and distinct forecasting – she offers on the matter. How is she able to know, instinctively, that the killer’s latest victim was found in a bathtub, or that she was strangled with a stocking when that piece of information was conveniently left out of all press interviews? Is there a leak in the department, or is she simply wise beyond her rattled nerves? Soon Monahan’s gruff and confident demeanor is slackened by the intricacy in Helen’s predictions, and the two begin to assemble the pieces in a mystery that would hardly seem solvable without Helen’s analysis or the inspector’s ability to react.

Budding working relationships became the anchor for many a serial killer study in the 90s, and the energy offered by the two leads in “Copycat” makes what might otherwise have seemed like a routine jaunt into an effective package with genuine psychological stakes. The villain in question is not without some mystique as a person – the movie shows him only when necessary, and long enough to emphasize the conventional framework of a stagnant social existence – but his methods provide their own puzzles; he is not so interested in creating a distinctive style as he is mimicking the great teachers of the past, including Berkowitz, Dahmer and the Boston Strangler. Helen knows there must be a trajectory at which he operates, of course, but the hunt seems, as it must, randomized. Why would he imitate the crime scenes of the Boston Strangler, then switch to the Hillside Stranglers (even down to the injection of ammonia into the victim’s bloodstream) and then automatically move over to the method of the Son of Sam? The screenplay by Ann Biderman and David Madsen does a respectable job at cloaking key details while assembling the findings into something plausible, and there is never a sense that any of Helen’s hunches come from a lack of sanity or far-fetched assumptions; this culture is part of her identity. “I am their pin-up girl,” she muses half-sarcastically. And so the latest madman in the metropolitan jungle goes hunted by a woman that knows the criminal mind better than it seems to know itself.

The movie creates an atmosphere that is tense and rousing without descending into caustic nihilism. Lives are shown in a routine of sympathetic limitations, and personal relationships occasionally surface in the backdrop of deadpan police procedure. One of the primary conduits for that prospect is Reuben (Dermot Mulroney), Monahan’s partner, who is seen intercutting his intrusive inquiries with underlying flirtation (the film touches briefly on the mutual attraction between he and Helen without making it an overwhelming distraction). A live-in caretaker offers some level of companionship but nothing of carnal interest, which only aggravates her lustful engagement. Is the movie holding itself back unfairly that way? I don’t think so. In the fog of a great mystery are the professional restraints that keep these characters from having personal lives, and “Copycat,” more than most movies about homicidal maniacs, shows the observers in a vicious cycle of taxing intrigue, personal awareness and distance from ordinary human interaction. They must be machines to best their case study.

As forces of resistance tied to the fate of this string of crimes, both Weaver and Hunter have tremendous presence. Each has been hardened by circumstances that go unstated (Helen’s far more substantially emphasized in the prologue), and both bring an edge to their personas that suggests fragility behind confident exteriors. Notice how effortlessly Weaver works with her character’s agoraphobia without overplaying the obvious emotional cues; there is a key moment early on when she attempts to subdue herself while in the hallway outside of her apartment, and that in turn foreshadows the climax, where she must do the same on the roof of a building to escape the chase of the antagonist. Director Jon Amiel borrows shamelessly from the visual style of “Vertigo” to propel the tension, but of course he does; here is a movie proudly molded by the great lessons of Hitchcock, without being evasive about any of the gimmicks it uses.

Yet the last half hour of the picture is like watching a train lose steam just before it crosses the threshold. There is a twist involving a hostage situation at police headquarters, for example, that doesn’t work at all – though it sets up an alternate route to dismiss a key supporting character, nothing substantial changes from their disappearance. Likewise, the final string of events that must ultimately lead Monahan and Hudson to the center of their culprit’s game are a haphazard rush; they play as if they were trimmed down by an editor trying to disrupt momentum. Was there more there than what remains? It’s hard to tell. By the end one is left with the suggestion that “Copycat” doesn’t want to be a film about serial killers at all, but more about the people who study (or go after) them. On those grounds there exists a fascinating case study. But what it lacks in frontal insights is more than made up for by the existence of “The Silence of the Lambs” and “Seven,” two superior films that penetrated to the bloody heart of their subjects. Given their austere nature, it is little wonder that Amiel’s endeavor is rarely mentioned in modern times. But there is something to be said of the more tempered detachment in a story that wants to look on without getting too involved. While others leapt into the deep end of their sensationalism, some patiently waited for the ripples to arrive on the shallow side.