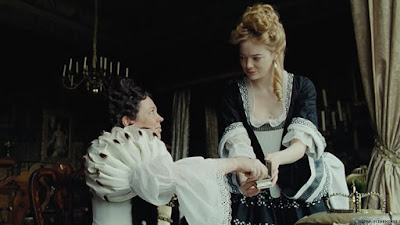 Her name is Abigail (Emma Stone), and she arrives in Anne’s stuffy chambers in the early scenes of the film seeking employment. She and Sarah are cousins, although not close; Abigail has been relegated to the life of service after questionable decisions in hard times, and her nearest relative only regards her scornfully. Nonetheless, she comes to take a position in the palace kitchen, and for a brief time the routine is a hazardous one – filled with mishaps, discomfort, and encounters with others that would be right at home in British sitcoms. But then a skill emerges: a knowledge of medicinal herbs that she interjects into one of the queen’s treatments for gout. At first this is seen as audacious disobedience, but after a brief reprimand she is invited out of the kitchen halls and into Sarah’s company, whose gratitude replaces most other preconceived notions. Does she recognize a danger in this? Perhaps. But for these people, we gather, any life without caution is a passage of boredom rarely worth mentioning.

Sarah and Anne partake in this exchange as if it were intellectual foreplay. The greatest moment between them occurs twice, each time as a way of framing each other’s place in social hierarchy. Prior to the first, Abigail spies a moment between Sarah and Anne that is shockingly candid; the next day, while they are shooting quail in the courtyard, an admission becomes a thinly veiled threat, leading Sarah to point the revolver at Abigail and fire it off (without an actual bullet, of course). It serves as a literal warning against an impending mind game. But much later, after Sarah’s place in Anne’s quarters have gradually been undermined by the power plays of her cousin, the scene plays through again with a different outcome: Abigail has now become an expert quail shooter, and after striking one at close range, its blood splatters Sarah’s face. These moments are symbolic of a rivalry where the manners can be reduced to the most primal of elements – they don’t come right out to say they hate each other, but through actions masked with etiquette they insinuate, quite vividly, the havoc that comes from being challenged.

This is not puritanical satire. Nor, for that matter, can it be surmised as “All About Eve” in corsets, as some high-profile film critics have suggested. Those are simplified descriptors. What Lanthimos has established here is a film that paints the origins of culture as a seedy exchange of egos and privilege, where good manners are the formality cloaking the true strides of a detestable nature. If that makes his picture a cynical one, it is a point he is all too happy to emphasize with almost sardonic glee. Dialogue, private musings and outbursts cut right through the etiquette and root themselves like disease in a decaying garden, and no one involved will admit so – because to deal with anything beyond their sphere of personal luxuries would violate the momentum of their desired outcomes. The film moves through this material with an almost meticulous displacement, too, which may be key: if we were to empathize or enjoy some of these characters, what occurs to them would dampen the enthusiasm we have for the themes. No, here is a film that attaches its situations to personality types rather than identities, and towards the end, well after the events have crumbled the social infrastructure of Anne’s parlors, there is a sense that everyone involved has orchestrated this endgame like the most incompetent of chess players.

The performances touch on all the correct notes. Weisz and Stone are well-paired as sparring peers, especially given the complexity of their union. Notice, for example, how their jovial sensibilities carry them through lighthearted conversation with almost free association, and then sometimes in the same sequences will move right into well-worded hostility. Some actors would lack a versatility in the inflection; here, they moderate precisely as the story requires. Nicholas Hoult is also well-cast as the scheming Harley, a member of the opposing political party, who plays a brilliant game of manipulation on the women – in the midst of their own self-glory is an intrusive watcher who observes, undermines and then pounces precisely as he must (although to his own credit, maybe the affairs of a country’s well-being give him better justification). Yet it is the unassuming Olivia Colman who transcends this material the most: her Queen Anne is often seen as meek and insecure, well beyond her own quiet self-loathing, and Colman takes potential caricature and elevates it into something of a profound intricacy. Sometimes it is hard to completely empathize with what she goes through, although some of her more heartbreaking scenes come later: Anne seemingly suffers from what may be a devastating stroke, and yet no one left in her sphere offers any acknowledgment of her discomfort. Here is an actress who resists the urge to play up the ailment and works with it much like a dog or cat would move on from losing a leg or tail – it is simply a matter of being, not an event that can change the course of mere survival.

The movie’s production values offer an added layer of insight. Utilizing photography that is more about slow tracking shots (or stationary ones), Lanthimos has evoked more than just an element of minimalism: he has stripped this world down to its most fundamental assets. Characters are frequently seen off-center in the frame. Whole rooms are often spied out of focus, perhaps to blur out background distractions. The famed fish-eye technique, often a liability in less focused films, is used to great purpose in hallways; one shot in the second act creates the striking effect that people are walking in circles rather than going in a straight line. The point? I imagine he may be working from the handbook of Paul Schrader, whose own recent “First Reformed” was also an exercise in what is celebrated as “transcendental style” – without quick edits or the overemphasis on set pieces, viewers are asked to abandon their anticipation of fanfare and focus primary on the behaviors in the foreground. What most will find in “The Favorite,” therefore, is the antithesis of costume drama, and underneath all the gowns and tapestries are vessels of contradiction, acting in accordance with an elaborate psychological game originating from the minds of some of the great teachers of cinema.

A study of his filmography suggests a great pattern. “Dogtooth,” about a family living in isolation, moves with the same underlying desperation as the early Michael Haneke films. “Alps,” about people who impersonate dead relatives, seems rooted in the fatalistic philosophy of Lars von Trier. “The Lobster” shares a great deal of commonality with Jean-Luc Goddard and Luis Bunuel. And “The Killing of a Sacred Deer,” his greatest, marries the deep soul of Greek Tragedy with the slow meditative aesthetics of Stanley Kubrick. Now he has made a film that plays like a diabolical union between Ken Russell and Robert Bresson, full of savage rhythms and emotional distance. Sometimes we rarely know how to react to any given situation – whether a particular scene be funny, shocking, sad, or some strange combination of the three. We are stimulated, in any case, by the unrelenting confidence of the filmmaker, who has studied the great lessons of his ancestors, mastered them, and now seems positioned to constantly spin them into elaborate acts of cheeky genius. “The Favorite” is a triumph of that distinction.