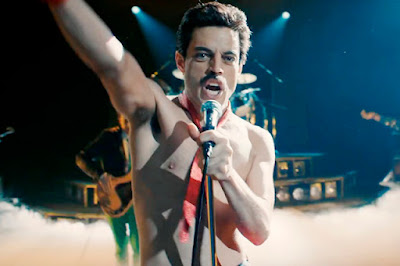 What emerges in front of the camera is, I guess, enough to deduce the point. Because Queen remains one of the most celebrated rock bands of the 20th century, a significant segment of this film’s audience will be arriving with all the framework of the story in their head, negating much of the need for exposition. We first meet Freddie, a youthful dreamer lurking in the shadows of British pubs, as he stumbles across a trio of college rockers who have just split from their primary vocalist; at first indicating he has a skill for songwriting, the others are enamored by the voice that emerges from his throat – caused in part, he admits, by being born with extra incisors, allowing for a larger mouth. At first the union provides some level of awkwardness, but soon the four establish a momentum that propels them beyond the dusty corridors of basement bars and college campuses, eventually leading them to a recording studio where they lay down their first album. This attracts the attention of a prospective band manager, who is won over by Freddie’s sales pitch: “we are a bunch of misfits playing to those misfits in the back of the room who don’t believe they belong.” And so the origins of the journey are established, leading viewers into a plethora of snapshots across a period of 15 years when Queen challenged, conquered and rewrote the rulebook on what it meant to be a rock-and-roll group in the middle of a boom for more eccentric personalities.

Much of the first act involves the studio process, and here director Bryan Singer shoots scenes inside vocal booths and at control boards that are surreal: to be there is to sense the very creation of the sonic benchmarks we have come to recognize as part of the pop culture lexicon. The problem, alas, is that his characters seem gleefully self-aware of their impact, as if enraptured by the very miracle going on before them. Consider a scene in which Freddie sits at a piano and belts out the first chords of “Bohemian Rhapsody,” which end with him taking a sharp breath while his eyes fill with euphoria – is he basking in the moment, as if certain this is going to create history? That belies all we know of the genius mind, which rarely takes itself seriously. Later, we find ourselves contrasting that possibility with a series of incidental recording sessions where the early drafts of familiar hits seem to materialize incidentally, as if an afterthought amid other discussion points. Were the members of Queen so gifted at their craft that writing a song was second nature to them, or were they good at what the did because they focused all their intensity on the creative process? The movie is conflicted about what it wants to say.

By the same token, the relationships around Mercury are not written with much gusto or depth. Nor, for that matter, does the movie provide them many opportunities for substantial conflict. In a span of 134 minutes, I counted four notable scenes involving argumentative situations, with each of them playing like a round-table discussion rather than a clash of heated exchanges. The most notable: a conversation between Mercury and Mary Austin (Lucy Boynton), which addresses the question of his sexuality. Both Malek and Boynton handle the material plausibly enough, but what are they aiming for – denial or understanding? The question of their union is not immediately resolved, perhaps, because it will provide them a framing device for later scenes, where Mercury will be forced to confront the notion that the “true love of his life” must move on without him, get engaged and even have a child. But they don’t engage in confrontations; they exchange lines of dialogue that sound like passive-aggressive platitudes.

At the center of all this is a performance that cannot be denied, by a relative newcomer whose grasp of the Mercury mystique proves to be the movie’s great selling point. Rami Malek is not content to merely mimic the style of the rock icon, either. Notice how his lips and eyes move with the same intricate unison as Freddie’s did, right down to the way he used his upper lip to tuck the glaring overbite. Or how he moves on stage with the same flamboyant bravado, as if fluid trapped in an elastic vessel. Or how he annunciates with the same urgency and vigor as that of his source. Here is a man who has done all the homework necessary of a plausible impersonation, and it ranks with some of the greats – yes, even with George C. Scott’s portrayal of Patton, or Ben Kingsley’s depiction of Ghandi. To see him is to discover, quite literally, the best casting decision possible of recent movie biographies, where it is usually just enough to apply the right makeup and prosthetic; Malek is so much Mercury that it’s as if a psychic line is opened between them right there in front of the camera, where it is allowed to run wild in all the scenes he is the focus of.

Why, therefore, is the story surrounding him so ordinary? Why is it so concerned with skimming through so much of his history without pausing long enough to develop some sort of cerebral rhythm with its players? The problem, alas, may be that there is simply too much of this story to tell in a single two-hour film; Mercury was a thoroughly busy man, right up into the years when he was stricken ill with HIV, and the matters of his private life often included transitory experiences in between the more enriching bonds he shared with friends and lovers. In that respect, it’s almost pointless for a film of this nature to even regard his fateful diagnosis; the movie uses it for dramatic effect in the climax, although the scenes of Queen’s performance at an outdoor concert provide more than enough context for the greatness of its subject. There is little doubt Freddie and his band were among the most celebrated figures in modern music. “Bohemian Rhapsody” does not contradict that impression. But for some inexplicable reason, in the midst of a handful of well-staged sequences that honor the showman in his greatest element, the movie manages to undercut the point by suggesting all this occurred incidentally, without much struggle or uncertainty standing in the way. How audacious for any film to assume an ordinary origin for an extraordinary performer.